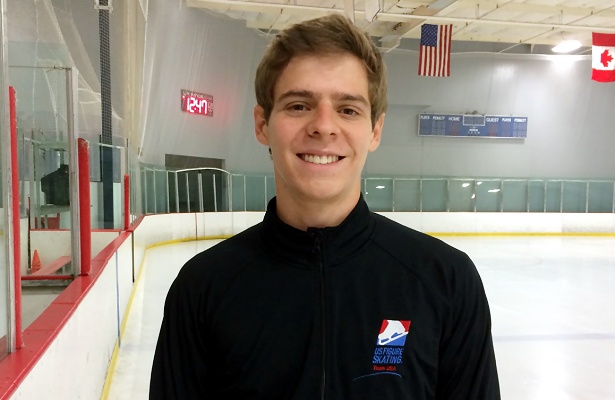 USA’s Richard Dornbush recently competed at Lombardia Trophy in Italy, where he finished in first place, earning a new personal best in both the long program and total score along the way.

“Lombardia went really well for me, in my mind,” he said. “It wasn’t just the programs, but the whole competition.”

All of Dornbush’s practices went well, as did both of his warm-ups, and he put out two good programs, landing all of his triple jumps. Although the former US silver medalist didn’t land the quad, he earned high levels and positive grades of execution (GOE) for his spins and footwork.

“I’m not sure what happened on the quad in either program,” he said. “In both cases, I had landed two solid ones in the warm-ups—two Salchows for the short and two toes in the long. I think I just may have let myself cool down too much before my actual skate. I also felt my right skate was a loose in the short, and that might have been why I was so unsteady on the Axel and the combo.”

Although a veteran skater, Dornbush was reminded at Lombardia that “being confident” and “staying in the moment” are keys to a successful skate. His main goal for the rest of the season is to treat the quad like any other jump, just as he does in practice.

“I think I just need to get over this mental hurdle. It’s all just rotations in the air after all, so what’s one extra turn?” he laughed.

The 23-year-old, who is coached by Tammy Gambill, is now preparing for his two Grand Prix (GP) events—Cup of China and Trophee Eric Bombard.

“This will be my third time competing at Cup of China, so I will feel right at home,” said Dornbush, noting that it will be his first time competing in France. “I look forward to seeing what both of these competitions hold for me.”

“I think Ricky is in a good place physically and mentally right now,” said Gambill. “He doesn’t sweat the little stuff and is staying very focused. I’m very happy with his performance in Lombardia and very proud of him!”

Currently, there are no planned changes in his programs for the GPs other than a bit of tweaking in the choreography.

The skater from Corona, Calif., is keeping his short program from last year to Mancini’s “The Sons of Italy,” while is new long program is to “Yellow” and “Viva la Vida” by Coldplay. Both routines were choreographed by Mark Pillay.

One of the main reasons the skater stayed with his short, is that he felt he has not performed it to it’s full potential on the international level.

“I really want another opportunity at showing everyone what a great program it can be and the results it can get,” he explained. “Not just at US Nationals, which can be quite different, but also on the Grand Prix circuit, and hopefully, at worlds.”

Lyrics turned out to be a big part of the reason why Dornbush chose the music from Coldplay, however, Pillay introduced the idea to the skater.

“I forget how it came about, but at one point, one of us suggested the idea of bringing the version of “Viva la Vida” with vocals together with the instrumental,” the skater recalled. “It turned out so much better than I think either of us really thought possible!”

Like many other athletes, Dornbush is currently balancing school with training. He recently transferred from Riverside City College to the University of California, San Diego in order to finish up his undergraduate degree in Physics.

“This is a huge change for me!” he said. “My training schedule is very different as I work it around my class requirements, and now I am practicing part time in the San Diego area.”

The 2012 Finlandia silver medalist took a year off school to decide on a major and train during the Olympic season. In the past, he was awarded the Memorial Fund from the United States Figure Skating, which aided in the heavy cost of both skating and university level education.

“Obviously, it turned out that taking a year off would not have have mattered so much, but at the same time, it gave me a lot of perspective and taught me a lot about what kind of athlete and skater I wanted to be,” said Dornbush.

“I recently found out that I am a Raytheon Scholar, which will be provide me with some scholarship money for school,” he added. “I am so grateful for every bit of help I can get!”

Dornbush’s main goal for this season is to establish himself as one of the top skaters on the international scene and the top skater in the US.

“Coming off of this last nationals was a huge let down,” said the skater, who finished in fifth place last year. “It was really tough to fall back after placing second in the short and then have such a disappointing long.”

The 2010 ISU Junior Grand Prix Final champion spent some time self-reflecting to decide what he really wanted out of the sport after that.

“One thing that I think was fairly obvious, was how much of an open field it was for the men going into the Olympic selections process at nationals,” he said. “There were a number of really talented guys who had similar results that could have been on top of that podium. There really weren’t any front-runners.”

This is what Dornbush wants to change for himself.

“I want to be able to come into nationals with people saying ‘this is one of the guys to watch out for; he’s proven himself internationally,’ and that’s why international results will be such a huge focus for me this year.”

In order to get there, Dornbush is focusing on becoming a more consistent skater.

“It’s not about ‘winning races’ for me this year, it’s about turning out ‘podium times’ every time I run my program,” he said. “I’m still going for the quads, but I’m looking at making them my whole cards. I want to be able to count on them 150 percent of the time.”