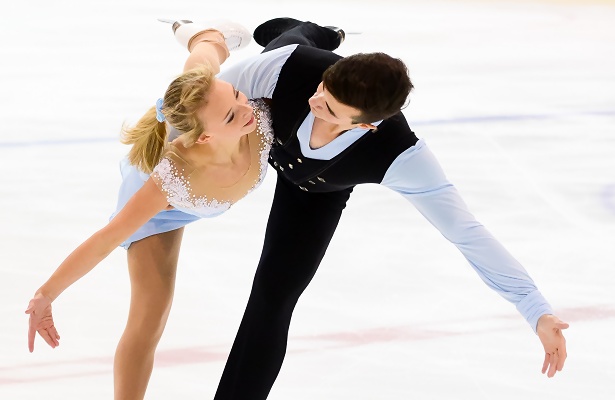 The new Canadian pairs team of Shalena Rau and Sebastian Arcieri recently competed in their first Junior Grand Prix (JGP) in Tallinn, Estonia, where they finished in seventh place.

While they opened with a good triple twist in the short program, both skaters went down on the throw triple loop and had a small “run in” in the footwork.

“That was a fluke,” said Arcieri of the throw jump, “a silly mistake that doesn’t usually happen. The short program definitely was not as good as how we normally train it, but we will do a better job next time!”

“Going into the long, I knew we had to give it our all,” said Rau. “No holding back. We were both a little cautious in the short.”

“Apart from the side-by-side Lutzes (fall), it was a good skate overall,” noted Arcieri. “We still need to be a little more aggressive in both our programs, but it’s a start and we will grow from this experience.”

“Tallinn was a good start for Sebastian and myself,” said Rau. “We learned a lot about each other and how we compete. We now have a good feel for what to expect going into an event.”

The team is currently prepping for Western Ontario Sectionals, which will be held later next month in Sarnia, Ont.

Rau and Arcieri, who are coached by Kris and Kristy Wirtz, officially teamed up six months ago.

Rau and her previous partner, Rob Schultz, had a successful year last season, however they decided at the end of the season that they had different goals and parted ways.

“I wanted to have the opportunity to compete on the Junior Grand Prix circuit,” she explained.

Arcieri’s partnership with Caitlin Fields ended in October 2013 when Arcieri had to take off four months of training due to an injury.

“I saw Sebastian come up on ice partner search and texted him right away,” explained Rau. “He was interested in the tryout, but we had logistics to figure out.”

Rau, 15, and Arcieri, 20, met twice in April and had successful tryouts.

“We knew we were meant to be even before we got on the ice,” said Rau. “The off-ice lifts felt great, we had natural timing.”

Arcieri had no doubts that the partnership would work.

“A tryout is a tryout, and once it happened, all I had to do was figure out how to make things work,” he said.

A few weeks later, Arcieri relocated from Montreal to Ontario so the skaters could begin training.

“It was a pretty big change getting used to training under new coaches and being in a different environment,” he said.

“Sebastian and I are very excited about how things have started, our similar work ethic and about finally finding the right partner to begin a long term partnership with,” said Rau. “We look forward to learning about each other, how we compete together and what helps us be successful.”

The team will is skating to a 70’s disco medley for their short program, and music to Dragon Heart for the long. Both programs were choreographed by Rebecca Babb.

“We are particularly excited about the short program,” said Rau. “It really shows our fun personalities.”

“The long program is drastically different from our short,” noted Arcieri. “It is strong and beautiful. We want to show two different aspects to our skating.”

Rau and Arcieri’s goals for this season are to do their best and enjoy their first season together, but they would also like to make the national podium and represent Canada at Junior Worlds.

The skaters, who train in Waterloo, Ont., feel their pair elements are coming together nicely, and revealed that they are working on the quad twist.

“We began training it (quad twist) early in our partnership, and hope to debut it in our program towards the end of the season,” said Arcieri.

“All that’s left for us to do is get some mileage and training in,” added Rau. “We have been working hard on the choreography for our programs. We hope to show the audience how much we enjoy skating together.”

The skaters are currently training six days a week, three hours on ice and two hours off.

In addition to skating, Rau enjoys various styles of dance, including ballet, jazz and lyrical, while Arcieri likes playing sports such as basketball, baseball and football. He also enjoys working on cars.