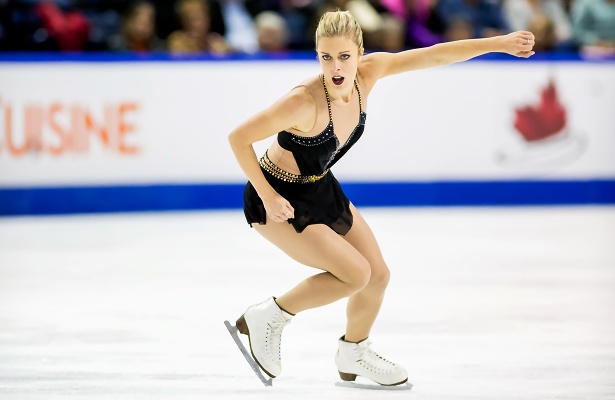 USA’s Ashley Wagner is gearing up for her fourth Grand Prix Final, which begins Thursday in Barcelona, Spain, and it’s not lost on her that the younger skaters have technically challenging programs. Four of the remaining slots were earned by the Russians, while Japan’s Rika Hongo was added after current US Champion Gracie Gold withdrew due to injury.

“I think that these Russian girls are absolutely incredible,” said Wagner. “They are so talented, and you can tell that they’ve put in the hard work to get to this point.”

“Going into the Final, I will absolutely make sure that that triple-triple is there, because I need it,” she added with a chuckle. “There’s no other way of saying it.”

Earlier this season, the 2012-13 Grand Prix Final silver medalist finished second at Skate Canada and third at Trophée Éric Bompard, and like other skaters, definitely feels that the callers have gotten a bit more strict overall on the rotation calls.

“The great thing is that they are holding everyone accountable and making sure that these jumps are fully rotated,” the two-time U.S. national champion acknowledged. “I think that when I’m in in the moment and competing, I’m not really focusing so much on whether one jump was cheated or whether one was clean. I’m just trying to focus on staying up and going through the program.”

Wagner, who won bronze in the 2014 Olympic team event, admits that she may have a bit of a nervous habit in that when she reaches the full height of a jump, she pulls in too fast, which can result in a “squeaky” landing.

“I think my biggest challenge, and what I need to work on, is going into competition and staying calm and really getting my jumps up into the air and hitting that high point so that I can get the full rotation,” the 2012 Four Continents champion observed.

Wagner feels that the main difference of this era of skating compared to that of several years ago is that the competitors a few years ago were a bit more seasoned, that Mao Asada and Yuna Kim had the “total package,” whereas the Russian girls will eventually come into their own as they progress.

“Right now, everyone sees them as one big chunk of Russian girls skating,” Wagner explained. “Mao and Yuna were able to create their own individual legacy. I think that’s kind of the difference between now and back then.”

Later this season, Wagner will be competing at her eighth nationals in Greensboro, NC., and hopes to reclaim her title that Gracie Gold currently holds.

“I think that the main difference between your first title and your second title is that the first title is kind of a surprise that you don’t quite expect,” she said. “When it happens, and you come back as a defending champion, the pressure’s on and all eyes are on you. There’s a weight that comes to it.”

Looking ahead, Wagner hopes to complete another Olympic cycle.

“Three and half years is a long time when you look at it on paper, but three and a half years go in the blink of an eye,” said the three-time Grand Prix gold medalist. “So as long as my body is physically capable of making it to the next Olympics, and as long as my heart is still in it, I absolutely, fully intend on going until Pyeongchang.”

Obviously, the 23-year-old realizes that she will be older in 2018, however, there are other ladies who were even older that won important titles.

“Look at Carolina Kostner,” said Wagner, of the 27-year-old Olympic bronze medalist from Italy. “Her career is one that I really admire because she didn’t really come into her own as a figure skater until her mid-twenties. Quite honestly, I was a skater that was always adjusting. I always had a new coach, and I am finally in an environment where I’m starting to settle down, get used to working with one person, and getting that one technique down.”

“I’m not just trying to adjust as quickly as possible to this new person,” she added. “I’m comfortable, and I’m really learning, so I feel that I’m going to be a late bloomer in this sport. I’m going to be 26 at the next Olympics. That’s not old. It’s not.”

The 2014 Skate Canada silver medalist feels that barring any injuries, she will probably be in her physical prime around then.

“So anybody who looks down upon some old gal going after her dream, I have many things to say to them, but I will just say, ‘watch me do it.'”

Coming off the 2014 Olympics, Wagner feels that this season the pressure, compared to last year, is like a “vacation”.

“It’s been really great, because at this point, I could end my career tomorrow and be totally satisfied,” she said. “I have a bunch of things that I have accomplished in this sport, so I can compete without all of this crazy pressure and I can just do it because I want to and because it’s what I still love to do.”

That being said, while there may be less pressure, Wagner doesn’t feel that competing is any easier.

“Mentally adjusting to competition as you get older is something that I am always learning about,” the 2014 Trophée Éric Bompard bronze medalist said. “It’s going to take some time before I really feel that mentally I am as strong as I will ever get. As time goes on, it’s ‘Yup this is a learning curve,’ and there you go.”

When asked how she felt about critical and/or rude comments made on social media, Wagner simply “stands up for herself”.

“What bothers me the most I would have to say, are journalists who go out of their way to be rude or be catty to get views, and they tag me in it,” said Wagner. “By all means, use my name, that’s fine, but there’s no need to put my Twitter handle when you’re putting out negative comments.”