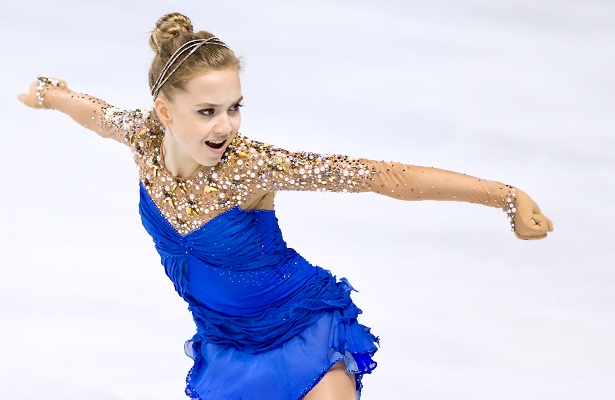 The Russian National Championships that are held this week in Sochi might very well be one of the most exciting ladies competitions this season, and it somehow feels right that it will happen on Olympic ice.

Radionova seems ready for the challenge. Thus far, the two-time World Junior champion has had a great season and was the only lady to win both her Grand Prix events at Skate America and Trophée Bompard. She then finished a strong second to Tuktamysheva in Barcelona, Spain at the Grand Prix Final.

“I see a development (in my skating), because I won two Grand Prix events,” the 15-year-old analyzed. “I was second in the Final, but it is still a better result than last year (fourth). This shows that I am not stagnating, but making progress.”

Although Radionova has grown, and sometimes looks like she is still adjusting to her longer arms and legs, she still is very consistent and put out strong performances in the Grand Prix, with the only major error being a fall on the triple loop in her Flamenco short program in the Final.

Winning Skate America was a big step for the two-time World Junior Champion.

“This was the first Grand Prix I won and I’ll never forget this victory,” said the student of Inna Goncharenko. “It is one thing to be second or third, and a totally different thing when the anthem of your country is played for you in honor of your victory. I want more of those moments. I want to stand on the top of the podium with the gold medal, hear the anthem and know that I am first.”

The Muscovite enjoyed another precious moment like this when she won her second Grand Prix title in Bordeaux, France. She felt she had improved over her first competition.

“Before the short program at Skate America I was very nervous,” Radionova noted. “In France, I was calm because I knew what I was doing and how I should do it. I did my job until the end. I think that I skated with more confidence and cleaner in France (than at Skate America), and I fixed the errors that I made at the first Grand Prix.”

Before the Final, the teenager fell sick with a high temperature and only had two days of training before she left for Barcelona. There was even speculation about her withdrawing, but she showed up. She was ranked third after the short when she missed that loop.

“I don’t know why I fell,” said the 2014 National bronze medalist. “Maybe I was tired, maybe it was nerves, or maybe it was a technical mistake.”

Although Radionova looked a bit shaky in practice and was still possibly affected by her illness, her free program to music by Rachmaninov in the Final was clean with the maximum of seven triples, and she pulled up one spot.

“I am so happy to have skated my free program clean and it is a personal victory to me to have overcome this difficulty and still show my best,” the skater said with a big smile. “My coach was so nervous that I would be too ill, but I told her I could fight to the end and I did.”

Radionova is working so hard that she makes most of her elements look easy. Nevertheless, she feels she still has a long way to go despite the fact that she can do several triple-triple combinations, even triple-triple-triples in practice, and usually gets level fours for her spins.

“There is no limit for perfection,” the Muscovite observed. “I can improve my spins, my spirals, I can work on my skating skills. I can improve my jumps. I can make them higher and at higher speed. I can’t stagnate and I actually still have to work a lot.”

Sochi is the next stop, the gateway to Europeans and Worlds. Radionova, who will turn 16 on January 6, was too young to compete at these events and the Olympic Games last season. Some figure skating fans even refer to the Russian ladies competition as the “Hunger Games”. In this case, however, there will be three “survivors,” or maybe two, depending on whether Sotnikova will be ready for Europeans and whether she will be named to the team even though she misses Nationals.

Radionova, who always appears composed in competition no matter what, is unfazed by the battle she is going to enter.

“Obviously, Russian Nationals are important, but so is each competition,” she noted. “I’ve competed at three Russian Nationals (senior level) before. I was fourth in my first, then I was second and third. I will prepare as for any other competition and I won’t worry too much and not get too nervous. I just have to go out and do my job. I am focusing on my performance.”

The young skater feels that a lot depends on the inner approach a person has.

“All athletes are preparing in a similar way,” she observed, “but some can pull themselves together in competition while others can’t.”

And usually, she can.