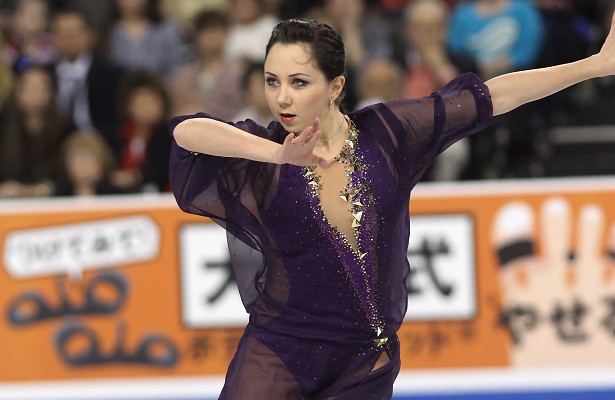 Russia’s Elizaveta (Lisa) Tuktamysheva has come back strong after a disappointing Olympic season, and has had kept herself pretty busy this season with competitions. She won a national event in September followed by victories at Nebelhorn Trophy, Finlandia Trophy, Coupe de Nice, the Grand Prix Cup of China and Warsaw Cup. At Skate America she finished second to her teammate Elena Radionova. The Russian will now be competing this week at the 2014-15 ISU Grand Prix Final, and is currently ranked second in the Grand Prix standings.

At Skate America, Tuktamysheva excelled in her “Bolero” short program and was leading, but after doubling two planned triples, she slipped to second, admitting later that she might have been a bit tired.

In Shanghai, the student of Alexei Mishin was ranked second in the short behind teammate Julia Lipnitskaya with a personal best of 67.99 points. She then went on to win the long program and the competition overall with a great performance of her characteristic and entertaining oriental-themed program to “Batwannis Beek” by The REG Project and “Sandstorm” by La Bionda.

This win meant a lot to the 2014 Skate America silver medalist, who was once touted as a contender for Olympic gold when she stepped on to the international scene four years ago, but then had a rough season and did not make the Olympic team.

“It feels unusual, like a forgotten feeling,” she said of winning the title at Cup of China.

This victory, along with her other achievements this season, certainly makes it appear that Tuktamysheva has returned to her previous rhythm.

“Success is important for each athlete, I am no exception,” she said. “A victory gives confidence, and each competition, no matter how it goes, gives you experience.”

“The competition in China taught me to fight to the end in each possible situation, to hold on, to rotate and not to think about if you can do it or not, but just go and do it,” the 2013 Russian Champion added. “In this competition, I understood what these words really mean. We hear this often from the coaches, but you can hear it and not understand.”

While the Cup of China was not her first victory of the season, it had more meaning to her since it was at a Grand Prix.

The skater, who turns 18 this month, also recalled the few errors she made herself in the free skate, although said she didn’t feel nervous before taking the ice.

“I was more nervous in the short program,” the teenager admitted. “Apparently I relaxed after the first jump combination (triple Lutz-double toe-double loop) and I doubled the second Lutz. After that, I was a little tight, but it helped me to pull myself together and to push through the program. Still, I was a bit nervous. It was visible in my skating that I was holding back a little.”

Nevertheless, she really got the crowd going, which clapped along with the music during her performance. The program includes many dance moves and Tuktamysheva was able to draw the audience into it.

“The same happened at the competition in Finland (Finlandia Trophy in October),” noted the skater. “As soon as the first beats of the music played, everybody started clapping.”

Tuktamysheva’s favorite part of the program is when she pauses in the footwork and puts her finger on her lips.

“I love my footwork and the final part of my program,” said the 2012 Youth Olympic Champion. “However, the nicest moment in Shanghai was when I did a wobbly Salchow and thought during the landing if I should add the double Axel or not. I jumped the Axel and I even got a few plusses for it. Then I was really pleased with myself, that I was able to land all elements without a mistake, although I was thinking before each one not to miss it and these thoughts throw you off.”

After the Cup of China, Tuktamysheva went to Poland last month to compete in the Warsaw Cup and won with nearly 50 points to spare in an overall weak field. Back home in St. Petersburg, she focused on preparing for the Final, but didn’t plan any major changes to her programs or jump layout.

“What I have now suits me so well that I do not want to change anything,” said the 2013 European bronze medalist. “Overall the programs seem to be fine technically and artistically. Maybe we’ll try to do the triple Lutz-triple toe combination because I do it in practice.”

One jump she would like to do is the triple Axel. While it’s not competition ready, Tuktamysheva has landed them in the past in practice and hopes to have one in the future.

“I am doing it in the lounge, but this jump requires a lot of power and a lot of courage,” she noted. “As a child I was not afraid of anything, I just jumped. When you get older, you start to approach things more thoughtfully. In any case, I think I am capable of doing the triple Axel if I prepare correctly.”