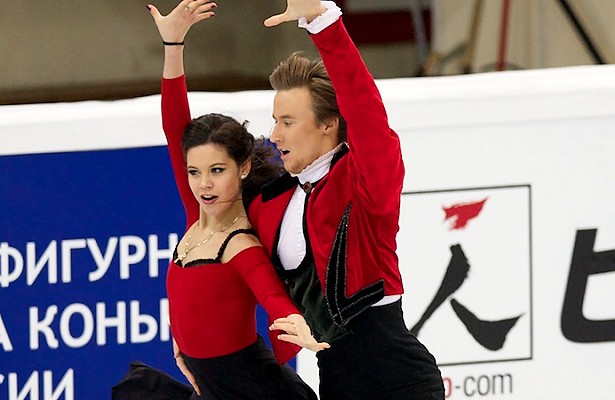 Elena Ilinykh and Ruslan Zhiganshin of Russia, who were both successful in different partnerships, never planned to skate together. However, after the much discussed ice dance break-ups of the past season, the found themselves together.

What might have looked like an emergency solution, turned out to be the beginning of a new, strong partnership, and as a result, they qualified for the 2014-15 ISU Grand Prix of Figure Skating Final in their first season as a team.

The shock came at Worlds last March when news leaked that Ilinykh’s partner of seven years, Nikita Katsalapov, wanted to dissolve their partnership and continue his career with Victoria Sinitsina, who had been skating with Zhiganshin. Ilinykh and Katsalapov won the bronze medal at the Olympic Winter Games and everybody believed that this young team would dominate during the next Olympic cycle. Instead, Worlds was their last competition together and they even finished off the podium as Katsalapov missed the twizzles in the short dance.

After the two dance teams went home to Moscow, Ilinykh and Zhiganshin didn’t know what would come next. Coaches Elena Kustarova and Svetlana Alexeeva, however, had an idea.

“After Worlds, I went on vacation,” said Zhiganshin. “I left Moscow and I went to see my grandmother and then I got a phone call from my coaches (Kustarova and Alexeeva) that the next day there would be a try out at the rink with Lena (Ilinykh). I didn’t really think about anything, I just took off and went.”

“It was the idea of Ruslan’s coaches,” confirmed Ilinykh. “To be honest, after Nikita it was hard for me to imagine to skate with anybody else. I think Ruslan couldn’t imagine being without Vika. We didn’t even let these thoughts (about splitting) into our heads. It was a shock. I think until the last moment, we did not believe that this was really happening.”

“When you’ve walked such a long path together, it is hard to accept this as the truth,” the 20-year-old dancer added continued. “Ruslan and I never thought about something like that, because they were our one and only partners for us. Therefore, it was difficult for me to think about continuing to skate.”

Ilinykh trusted Kustarova, with whom she had worked with before, even when still skating with Katsalapov.

“She helped me a lot to overcome the situation,” said the Olympic bronze medalist. “She called me and said, ‘let’s try it.'”

However, Ilinykh made it clear that she didn’t want to continue skating just for the sake of it. She only wanted to continue if there was a real perspective. Kustarova felt there was, and so Ilinykh and Zhiganshin tried out in April.

“When we skated together and then looked at the video, we realized immediately that this works well and that we look very good together, although nobody could imagine this beforehand,” Ilinykh recalled. “We understood that we should continue. So we started to work, literally from day one on.”

Obviously, the dancers had to adapt to each other.

“Of course it is a different feeling,” Zhiganshin noted. “You take the hand and the grip is a little different, but we got used to each other very quickly. It wasn’t an insecure feeling as if there was a stranger next to you.”

“For me, it went also fast,” said Ilinykh. “I thought it would be much harder. Obviously, in the beginning, the feeling was completely different, but then as Ruslan said, we quickly felt comfortable with each other.”

Both athletes get along off the ice as well, and feel that this helped the transition.

“Ruslan and I talked a lot off the ice,” the 2010 World Junior Champion noted. “We had some common topics outside the sport. I don’t know, maybe also because of this we quickly found a common language.”

Although they have known each other since childhood and even skated in one group as children, when they just started ice dance, they didn’t really socialize before as they were skating with different partners and under different coaches.

Ilinykh and Zhiganshin debuted at the Grand Prix in Shanghai, where they finished a respectable fourth with solid performances. A week later in Moscow, they skated with more confidence to place second, especially thanks to their strong short dance to Carmen.

“Actually, at the beginning, we didn’t have the goal to do Carmen,” shared Ilinykh. “We knew we needed Spanish motifs for the Paso Doble. We listened to a lot of music in this direction, to Flamenco, but not a single music that I heard got me. Then we learned that in Carmen there exists this rhythm that we could use for the Paso Doble compulsory dance and the coaches said right away, ‘this is a 100 percent for you and we have to try it.'”

“I liked the music right away,” said 22-year-old Zhiganshin. “We worked with Antonio Najarro and he helped us to feel and to interpret this theme in a more correct way.”

The lyrical free dance is set to “Appassionata” by Secret Garden and “Anthony and Cleopatra” from the Cleopatra soundtrack.

Both skaters were pleased with their international debut at the Grand Prix events. They didn’t participate in any senior B international events earlier this season, as they felt they were not yet ready.

“We are really positive about our first competitions as there was a lot of work that we did in this short time,” said Ilinykh. It is great that we were able to skate that way in the two Grand Prix events.”

“I think it was good what we did, but there is a lot of work left,” she continued. “The most important thing is that we realize what we have to do and where we need to step it up.”

“Before the competition, it was hard to tell anything,” noted Zhiganshin. “I am very pleased with our performances.”

At Rostelecom Cup, Ilinykh and Zhiganshin competed for the first time against their former partners, who finished fourth.

“It was interesting,” said Zhiganshin said, while pointing out that they were not focused on beating them. “It was important to skate our programs as well as we could. For me, it is very important that my coach is satisfied and is smiling when I come off the ice. And the coaches were smiling.”

“For us as a new team, each performance is important and we honestly didn’t think about beating someone,” agreed Ilinykh. “Of course it is nice that we were rated higher at Rostelecom Cup than our previous partners.”

Following the Grand Prix in Moscow, Ilinykh and Zhiganshin continued to polish their programs and technique.

“Our job now is to improve technically,” Ilinykh said. “Artistically, there is so much burning inside us. We have so many emotions inside ourselves that we can give. The technical part is not so strong yet, so we cannot yet fully open up and show it. When we have improved technically, I think we’ll get higher components because people will see that we are confident.”

The ISU Grand Prix of Figure Skating Final will be the next chance to show their progress, and then Ilinykh and Zhiganshin will be focusing on Russian Nationals where they hope to earn a spot at both the 2015 European and World Figure Skating Championships.

Needless to say, Russian Nationals will be exciting. Less than a year ago, Ilinykh and Zhiganshin competed on this ice with their former partners at the Olympic Winter Games, and will now face them again as opponents.