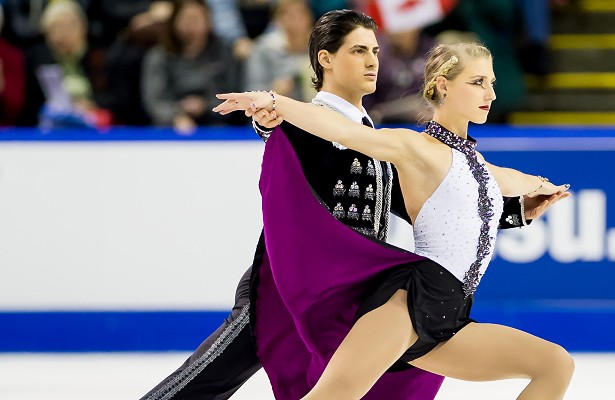 Canada’s Piper Gilles and Paul Poirier will compete in their first Grand Prix Final as a team this week in Barcelona, Spain. While Poirier has competed in two Grand Prix Finals with previous partner, Vanessa Crone, this will be Gilles’ first time out.

This gave them a lot of confidence going into their next event in Paris, France, where they finished less than ten points behind France’s Gabriella Papadakis and Guillaume Cizeron.

“We still thought that we could have been closer to the French because we did compete against them in Barrie,” said Gilles. “We had a few mistakes that cost us the placement there, but it’s a nice feeling to be able to be up with some of the world’s top competitors.”

Poirier agreed, adding that sometimes, especially after an Olympic cycle, there’s a lot of movement.

“It just confirmed that the work we have done has paid off,” he said. “I think that was what was important to us. It made everything we’ve done the last couple years satisfying. It’s motivated us to reach even higher than we have the rest of the season.”

While Gilles and Poirier didn’t make the Olympic team last year, they finished a respectable eighth at the 2014 World Figure Skating Championships, and view the new cycle as a “fresh start”.

“We still have so many things that we want to accomplish in the next four years,” said Gilles. “We still want to keep pushing ourselves artistically and technically. I think it’s very exciting. It will be interesting to see what happens.”

“We realize how much work needs to be done and how much we have to accomplish this year to get where we want to be in three years,” added Poirier. “I think once you have that shared perspective, it isn’t really hard to motivate yourself, because it’s going to take four years to build the product that you want at the Olympic Games and really skate your best.”

Thus far, the ice dancers, who are coached by Carol and Jon Lane and Juris Razgulajevs, feel like everything is going according to plan.

“We set ourselves some pretty big goals for the season,” said Poirier. “We wanted to medal in all three events and qualify for the Final, which we’ve done now, so I think that this is going to be an experience that we’re really just going to enjoy.”

The skater added that there wasn’t a lot of time to train since their last event at Trophée Éric Bompard and that there wouldn’t be any major changes.

“I think we’re just going to come out and give two really strong performances when we get there,” he said.

“We did set some high goals for ourselves,” noted Gilles, “but I think we’ve done a pretty good job of accomplishing them. We wanted to go to Barcelona and just kind of really take in the experience and learn from it.”

Last season, the team was in “survival mode” as they lost training time when Poirier broke his ankle in May 2013.

“I think actually having an off season this year has really, really put some perspective on how much time we had lost last year,” he said. “We’ve really had so much time to make big changes in our skating to make progress. On the other hand, as much as last year was disappointing, I think it really has helped us with much of the off season this year.”

His partner feels that it has shown them how much they can improve within a short amount of time.

“Last year for us not being as polished, it has really shown how much we can grow within another six months, and I actually think we’ve done a really good job of that,” Gilles pointed out.

While Poirier doesn’t feel he’s at 100 percent yet regarding his ankle, he doesn’t feel it is limiting him on the ice.

“My right leg is still a little bit weaker,” he explained, “and I still have some limited of range of motion in the ankle. I don’t know if it will ever actually get back to normal, but I think the important thing for us right now is that we’re able to train at capacity and we don’t feel limited. We can do everything we want to.”

Like many other athletes, Gilles and Poirier are currently juggling studies with their sport.

“It’s not an easy task,” admitted Gilles, “but it’s a nice mental get away from skating. We stress so much about every little detail on the ice, and we have a lot of off-ice stuff to accomplish as well. I think it kind of gives you something to fall back on later on in life.”

Poirier is currently finishing up his last year, while Gilles has three left as she relocating to Canada from the U.S. to skate with Poirier in 2011.

“To be able to pay for international fees and stuff like that was not in the budget, but once I got my permanent residence, I was able to get a scholarship,” she explained. “So technically, I’m second year, but I’ve really only taken half of my finals and classes, so I’ve a long ways to go.”

“It predefines the different niches of art, so basically I get to choose two modules,” she explained. “I’m graduating in fashion and communication, so I have two major things to get the one degree.”

Poirier has already completed his major in linguistics.

“It’s my last year, and I just have a few lessons to finish up, so I’m in really random classes,” he explained. “It’s fun. I do something different.”