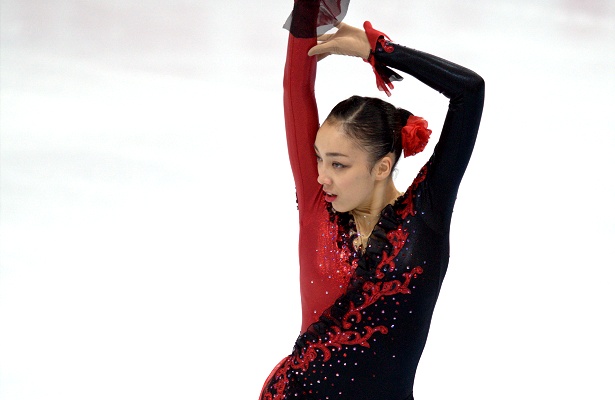 Following the retirement of Akiko Suzuki and Mao Asada’s decision to take time off competitive skating, Japan, once the world leading power in ladies figure skating, suddenly found itself without a top contender. At the 2014 Rostelecom Cup, Rika Hongo managed to break the chain of Russian victories at this year’s ISU Grand Prix Series events by winning the gold.

“I think I still do not realize that I had won,” the 18-year-old said, a day after her victory. “I cannot say that I am experiencing any profound emotions right now. I only know that I am very, very happy.”

The 2014 Japanese national junior champion, who was second after the short program, nailed her expressive free skating routine, which featured seven triple jumps, including a triple flip-triple toe loop and a double Axel-half-loop-triple Salchow combinations. The technical panel, however, marked the back ends of both combinations as underrotated and penalized her for a wrong take-off edge of her triple Lutz.

Still, the skater believes that she had made progress since her first outing at 2014 Skate Canada International, where she finished fifth with 171.47 points overall. In Moscow, she posted three new personal best scores, including an overall total of 178.00 points.

“I did not make any changes to my programs since Canada,” said the student of Hiroshi Nagakubo, “however, my coach and I analyzed my mistakes at Skate Canada and I worked very hard on correcting them in two weeks between the tournaments. I tried my best to avoid making them again. I think it made the difference.”

Gaining the experience of competing against world leading skaters helped too.

“I have only competed as a Junior before,” Hongo pointed out. “I had thought a lot about my skating prior to this season. I sat down with my coach and analyzed what my advantages and disadvantages were. Still, to skate at a senior level was a big change for me. I now compete with skaters whom I only saw on TV before. I was very nervous about it at first, but at the same time, I am very grateful for the opportunity.”

“Japan has a lot of strong skaters,” she continued. “It is a great honor to represent our country and to follow in the footsteps of such skaters as Mao Asada and Shizuka Arakawa. I know I have to work really, really hard to approach their level of skating.”

Nevertheless, the 2014 Asian Trophy champion does not see herself as the “next big thing”.

“I can honestly say that I have never thought of it this way,” said Hongo, regarding her chances to become the new leader of Japanese Ladies figure skating. “I only know that I respect skaters like Mao Asada and Akiko Suzuki a lot and that I have to work really hard to prepare well for the Japanese Nationals.”

The Sendai native started to skate very early in her life.

“My mother is a figure skating coach,” she explained. “At first I skated because she put me on the ice, but then I realized that I love it and I wanted to continue. I was three years old when I first started to skate, but at five, I decided I wanted to do it.”

Unsurprisingly, her favorite thing about figure skating is jumps, “especially the flip”.

This season, Hongo choose not to capitalize on the ISU’s permission to use vocal music.

“We had choreographed both programs before the ISU Congress made the final decision,” the two-time Junior Grand Prix medalist explained. “Frankly, I do not think there is much difference.”

The skater, along with her coach and choreographer, decided on Bizet’s Carmen for the long program.

“It was something I really wanted to skate for a long time, so I asked my coach to let me do it,” said Hongo.

The 2014 Triglav Trophy champion does not feel any particular affinity for classical music, however, the music chosen for her short program is from the ballet Le Corsaire.

“My goal is to skate to it beautifully and properly,” said Hongo.

In addition for preparations for the Japanese Nationals and, potentially, her first senior ISU Championships, the 2014 Finlandia bronze medalist has another challenge coming up later this season.

“I am at the final year of high school,” she said. “It is very difficult for me to balance skating and education, but all my teachers are very supportive of me. They know how important figure skating is for me. My skating counts as a [mandatory extra-curricular] club activity.”

Hongo is currently the first alternate for the Grand Prix Final next month, followed by teammates Satoko Miyahara and Kanako Murakami.