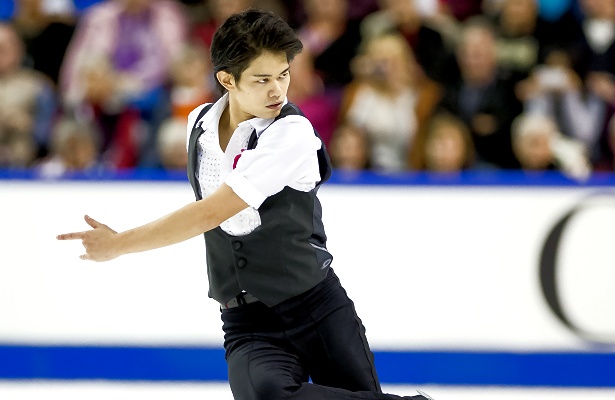 Last season Japan’s Takahiko Kozuka had to deal with the biggest disappointment of his career: despite finishing third at Japanese Nationals, he was not included in the national Olympic team. The skater admits that it haunts him still, but the 25-year-old is determined to overcome the blow and believes that his performances at the 2014 Rostelecom Cup put him back on the road to recovery.

“I was very disappointed that I did not make the Olympic team,” admits Kozuka. “I was just one step away from my goal, and yet I failed. I think it has affected my skating this season.”

One of the things that helped him to recover somewhat was his participation in the 2014 ISU World Championships in Japan.

“To be included into the team for the World Championships made a lot of difference for me,” said the student of Nobuo Sato. “At Worlds, I saw other skaters doing their best and it pushed me forward. I told myself ‘Ok, you are here, just do it!’ I felt that I needed to take action. Everyone else around me was on their best game, so I took action. Now I realize that I skated the way I did at the World Championships because of the atmosphere, not because I wanted to.”

He finished a respectable sixth, but later had to face another set of challenges in his preparations for the post-Olympic season.

“Until August, everything was fine,” he explained. “I felt great, I was confident in my skating and was doing well. I was ready to move forward. I did some ice shows and skated well there.”

Later, however, everything seemed to fall apart for the 2011 World silver medalist.

“Even though I was doing my best and working hard, I kept getting injured,” said Kozuka. “My neck hurt, my back hurt, I had sprained my ankle, and I had problems with my shoulder. Something was always wrong. I could not understand it at all. I wanted to keep going, but I was unable to. I could not focus on my skating.

His problems continued through September and October, affecting his performances at the Japan Open and Skate Canada, where he finished sixth and eighth, respectively.

Despite his difficulties, the Nagoya native has refused to give up on the quad. He realizes that without it, he will not be able to challenge for the podium at Japanese Nationals later this month.

“Last year, it was the same thing,” Kozuka pointed out. “If you cannot do it, why bother showing up?”

The two-time Four Continents medalist feels that quads are important for his motivation, and admitted that he had given thought to withdrawing from Skate Canada.

“Of course, I was not able to land the quad cleanly in September and October, and even right now, my success rate leaves something to be desired,” he said. “For so long, I was not able to pull myself together and do a clean one.”

However, at the 2014 Rostelecom Cup in Moscow, the skater finally felt that he could focus and on landing the jump.

“I felt something new inside me, something that allowed me to put all my energy into a quad and to keep fighting,” said Kozuka, who has won four gold medals on the senior Grand Prix circuit since 2008.

The 2006 World Junior champion landed a flawed quad toe in the short program, where he finished third, but fell on both attempts in the long and slipped to sixth place overall. Nevertheless, it was still an improvement over his eighth place finish in Kelowna, Canada.

His next goal is to skate two perfect programs at Japanese Nationals despite all his injuries, which he claims are minor.

“Except for a back injury, which has bothered me for years,” said the current Japanese bronze medalist. “There is nothing to be done about it. I have my coach and other people who take care of my health. They support me and now I have to focus entirely on my skating to thank them for this support. I think that I can do it.”

The skater is also supported by the Toyota Motor Corporation.

“Toyota is my sponsor and they create comfortable conditions for me to train,” Kozuka explained. “I think they selected me because they wanted me to be a role model for Toyota workers, to motivate them to keep improving and to work hard. To give an example of persistence and determination.”

“It’s a pity that I was not able to skate that well at Skate Canada and in Moscow,” Kozuka continued. “I think I set quite a poor example, but I will keep trying my best and to skate well at Japanese Nationals to show support to them.”

The 2010 Olympian is currently enrolled in a graduate program at the Chukyo University.

“I study sport biomechanics,” he said, “however, right now I am on an academic leave. I do not attend any classes, but I have all the data stored on my computer and I will resume my studies.”

Kozuka is also interested in sport history, especially the history of figure skating in Japan.

“I want to learn about the experience of previous generations, to learn about those people and use their experience to improve my own skating,” he said. “In Moscow, I saw posters dedicated to Stanislav Zhuk, the famous Russian coach. It was very interesting for me, because I think Japanese and Russian figure skating are very closely linked. My grandfather was a figure skating official and he spoke Russian and Chinese. He used to attend competitions in Russia and he often helped with translations.”

“I need to complete the events I am scheduled to compete in this year,” he stated. “We will see what happen afterwards. I would like to compete at Winter University Games, for example, but basically, I just need to pull myself together and keep fighting.”

Still, the veteran skater does not completely rule out the 2018 Olympics, either.

“I cannot think about what will happen four years into the future,” he said. “I am just taking it one step at the time.”