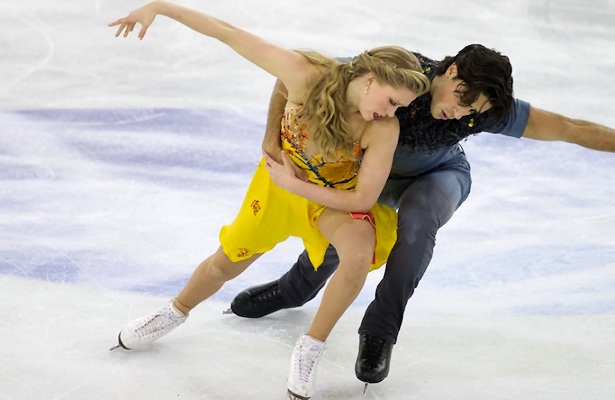 Canada’s Kaitlyn Weaver and Andrew Poje have enjoyed a successful season thus far, winning every event, most recently at the 2014-15 ISU Grand Prix Final, and they chalk it up to strength and confidence.

“We definitely think that we’ve got tons of room to grow,” said Weaver. “We’re pushing ourselves to be stronger, bigger and better. It’s been very exciting. It’s a new year, a new quadrennial, and we’re happy to be at the forefront of it and helping to continue Canada’s tradition of great domination in ice dance.”

Going into the Final, the World silver medalists were ranked second—a little less than five points behind USA’s Madison Chock and Evan Bates, and feel that they left some points on the table at both Skate Canada and the NHK Trophy.

“We need to make sure that our programs are squeaky clean and keep up with the consistency,” said Weaver at a press conference prior to the Final. “We’re adding more and more of ourselves into each program, which is really important for us and for the performance quality, which will help that second mark.”

The 25-year-old added that there is a fine balance between the technical and component areads, and that they we’re working hard on both. It showed when it counted as they scored a new personal best in both the Short and Free Dance in Barcelona, Spain.

The team performed a very traditional and spirited Paso Doble, complete with matador and his cape. Their routine to “La Macarena” featured level-four twizzles and a level-four rotational lift, both of which garnered high grades of execution (GOE). Their side by side footwork and the two Paso Doble sections were graded a level three, and the 2010 Four Continents champions earned 71.34 points.

The skaters were thrilled with the atmosphere and tried to use the energy from the crowd.

“We tried to soak it in and use it in our program,” said Weaver, “but I think we can still do better on the technical side.”

In the free dance, the team skated a complex, nuanced, but ultimately joyful routine to Vivaldi’s “Four Seasons,” displaying intricate footwork and impressive lifts. They collected a level four for the lifts, twizzles and spin, and a level three for the two step sequences, setting a new personal best with 109.80 points.

The 2014 Nebelhorn Trophy champions couldn’t have been more pleased with their performance.

“It was definitely a personal best, not only in terms of the score, but in terms of the skate,” said Weaver. “Everything came easily. We felt calm and prepared, and I think that’s the best zone to compete in.”

“Between these two days, I think we can say it’s been our best competition yet,” she added. “Certainly so far this season, and we look forward to building on this momentum for the rest of the season.”

Moving into the next Olympic cycle, Weaver and Poje feel like the basics of the discipline will definitely change over the next few years.

“It has to,” said Poje, noting the changes the short dance has already had this season. “It always needs to be developing. We’ll develop our own styles, and hopefully, personally, Kaitlyn and I want to leave some impression on skating as whole. To leave our mark and to change something.”

Weaver hopes that over the next three seasons that they can leave a sense of story-telling.

“I feel like what I think we’re best at is combining the acting element into the skating element, and our best programs show that,” she said. “They show relationships, they show a story, and I think that this can help take skating to another level.”

“I don’t think anyone could have predicted four years ago what it would look like right now,” she added. “I think every team, when it’s at the top, helps to change the face of the sport a little bit. It’s hard to predict, but I think that’s what perhaps can be our lasting impression.”

With 2010 Olympic champions Tessa Virtue and Scott Moir taking a break after winning silver at the 2014 Olympics, Weaver and Poje are now touted as the top ice dance team in Canada. In terms of support and advice, the four-time Canadian national silver medalists rely mostly on their coaches: Pasquale Camerlengo, Anjelika Krylova, Shae-Lynn Bourne, and Natalia Annenko.

“They’ve all been in our shoes,” noted Weaver. “I think that on a day to day basis, we get the mentality from them. We definitely chat with Tessa and Scott, and they’ve been extraordinary with us, keeping in touch, and giving us a helping hand shall we need it.”

Coming off the Olympic season, the skaters have formed many new friendships in other sports as well.

“We find we have in things in common even though one’s on a ski hill and one’s in an ice arena,” said Weaver. “The mentality is the same, so a couple of times this year I have reached out to some of those friends to say, ‘Hey, how’ve you handled this?’ or ‘What does that feel like?’ and its somewhat removed. It gives you a fresh perspective.”

One example is Canadian Kaillie Humphries, the current and two-time Olympic champion in bobsledding.

“I think the biggest thing that she has is confidence in herself,” observed Weaver. “She knows how she prepared and she knows that that’s the best that she can do. I think that’s what really exudes from her. It’s a different sport where you’re racing against the clock; you don’t have to convince people that you’re the best, but that type of persona is fun to learn from. I consider her a pretty different individual, but that strength, power and confidence is something that I would love to bring as a part of our game, as well.”

“We definitely reached out to different aspects other than skating, because I think it’s important to learn from all those athletes that we’ve created relationships with at the games,” Poje pointed out. “Even though they are in different sports, I think they have great mentality to be at the top of their game in their own disciplines, and I think it’s helpful for us to think of skating differently.”

“We’ve also utilized the same mentors we’ve had throughout our career,” the 27-year-old added. “Shae-Lynn has always been integral to our team, and we’ve always looked to her to help us along the way. Obviously, our own coaches, Pasquale and Anjelika, have always been our rocks.”