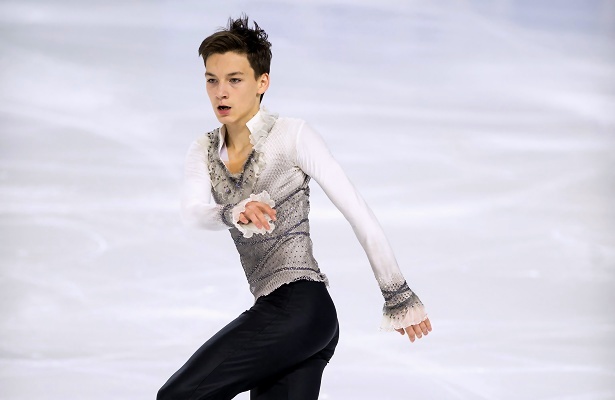 There is currently a lot of talk about the depth in Russian Ladies figure skating, however, the men are getting less attention. Nevertheless, Russia has young and talented male skaters to offer as well, and one of them is Adian Pitkeev.

The 16-year-old debuted on the senior Grand Prix this season and finished a respectable sixth at both Skate America in Hoffman Estates, Ill., and Trophée Éric Bompard in Bordeaux, France. At Russian Nationals, the Muscovite pulled up from fourth to third to grab not only the bronze medal, but also a spot on the team for Europeans.

Although he landed a quad-triple toe in the short program for the first time in competition, as well as a quad toe and six triples in the free skate, the ambitious teen was none too pleased as he had missed one triple Axel.

“That was a shame, because it was good in training,” the 2013 World Junior silver medalist said. “Then I also didn’t do a combination with the second Lutz and I gave away some points. I always want to skate well, so I was a little sad that not everything worked, but I was happy with my placement.”

Pitkeev was also critical with himself when he assessed the first half of his season.

“I wouldn’t say it was great, but not bad either, because I was able to include the quad into the programs,” said the 2013–14 Junior Grand Prix Final silver medalist. “Basically, I do it in each competition and this is good. Too bad for the mistakes on other jumps, but I think this is inevitable when you start doing a quad in the program. You can’t skate clean with it right away. I don’t even know how to explain it, but it is really more difficult to skate the program afterwards (after the quad) and it is hard towards the end.”

The quad came at the right time when Pitkeev moved up to the senior level this season, however, the jump wasn’t really consistent until December. Funny enough, the skater pointed out that the quad improved as soon as his coaches Eteri Tutberidze and Sergei Dudakov had left with other students for the Grand Prix Final.

“I needed to do something new with my technique on the toe,” the 2014 Russian Junior champion explained. “I didn’t really change it, I just corrected it a bit. When you are growing or gaining weight or something else is different, you always have to correct your technique, because the parameters have changed.”

Pitkeev is currently training in Moscow in a skating school with accomplished athletes such as Olympic Team champion Julia Lipnitskaya and European silver medalist Sergei Voronov and feels he is learning from watching them, as well as other senior skaters he meets at competitions.

Competing at the senior level has pushed Pitkeev, whom the Russian Figure Skating Federation regards as one of their most promising young male skaters, and helped him to improve.

“I am skating with more confidence,” he observed, referring to Russian Nationals as an example. “When I competed last year and was in the last warm up group for the free skating, I thought that this is not really my place. It was a bit hard to skate and the practice didn’t go so well either because I felt I didn’t belong there. Now, on the contrary, I came to nationals and thought the last warm up group was exactly my place. I feel more confident in competitions and also in practice.”

Pitkeev’s new confidence is also reflected in his goals for the season.

“It wasn’t a goal at the beginning of the season, but about two weeks before Russian Nationals, I thought that I could make the team for Europeans,” said the 2014 Lombardia Trophy bronze medalist, adding that he didn’t put any pressure on himself. “(I thought) if I make it, it will be great, and if I don’t, it is okay.”

For the short program, the national bronze medalist is skating to Rachmaninov’s “Rhapsody on a Theme by Paganini”. His free program is to “Sarabande Suite” by Globus, although this wasn’t his first choice as he originally had a program set to “Exogenesis Symphony” by Muse. After the test skates earlier this fall, the program was scrapped.

“I just couldn’t skate to it,” said the athlete. “This music was still too difficult for me.”

Pitkeev is now preparing for the upcoming 2015 European Figure Skating Championships which will take place in Stockholm, Sweden. While he is looking forward to his debut at this level, he is not putting any pressure on himself.

“I don’t have any expectations,” he offered. “I just want to skate as clean as possible. That’s the most important.”