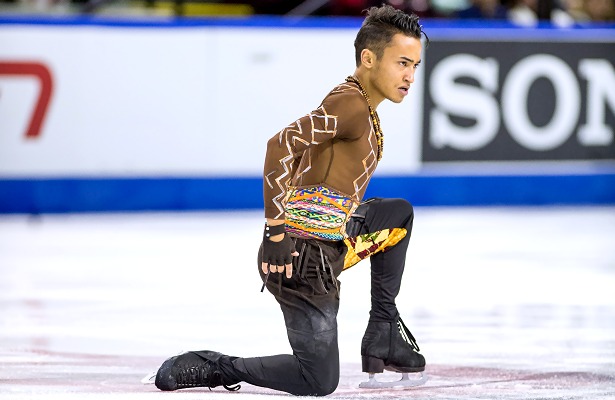 Florent Amodio won gold, bronze and silver at the European Championships in the years 2011 to 2013, however, the Olympic season turned into a nightmare for the Frenchman. After poor performances at both the Europeans and the Olympics, he ended his season there, opting not to go to the World Championships.

“I’ve had great success and I wanted to continue skating after this tough season,” said Amodio. “I did think about what to do, to stop or to come back, but I decided to continue.”

Following some ups and downs this season, the 24-year-old wants to show that he is back in the game at the European Championships in Stockholm, Sweden, this week.

Earlier this fall, the 2011 European Champion seemed to be on the right track at Skate Canada where he finished sixth. He was happy with his progress, however, his demons caught up with him again at his second Grand Prix at Trophée Bompard where he fell apart in the free skate and dropped to 11th.

“I can’t explain what happened,” said the four-time French Champion. “My practice was perfect, but unfortunately everything was not 100 percent consistent.”

Amodio was so distraught after his performance that he even chose not to perform in the Exhibition Gala, however, he didn’t give up.

“I am a fighter and I found my motivation where I needed and I believe in my capacities,” said the Brazilian-born skater. “I know that I can do it and I found another big source of inspiration by joining the French team in Bercy.”

In fact, following his misfortune in Bordeaux, he decided to change coaches and is now a student of Claude Péri, but continues to work with Bourzat as well.

“Bernard (Glesser) suggested that I go to Bercy to Claude as the high-level skating in France is happening in Bercy,” Amodio explained. “This is very important for my motivation every day. In Cergy, I was alone.”

Amodio’s decision appears to be a step into the right direction as he defended his national title in December. Although his performances weren’t perfect, they were an improvement from those in Bordeaux.

“The French Championships are always a very good test for me to confirm what I’ve worked on in practice,” Amodio pointed out. “I wanted to move on after the bad (Trophée) Bompard and to push myself with regard to Europeans.”

The skater put the quad back into his short program, and both programs went quite well.

“My weak point was my stamina,” Amodio admitted, “and this is something I have been working on a lot for Europeans.”

The 2013 European silver medalist feels comfortable in his new coaching environment under Péri and Bourzat.

“Claude is like Bernard,” Amodio noted. “She is a technician and we have known each other for many years. I have a lot of confidence in her. Our work is precise and concise. She has helped me to overcome my fears and we have been doing great practices.”

Amodio had turned to Bourzat earlier, after the dancer and his partner, Nathalie Péchalat, retired following the 2014 World Championships.

“He is more like a big brother for me than a friend,” Amodio said of the ice dancer, who used to be his teammate. “Fabian has always protected me. He always set an example for the team, almost like Brian (Joubert), but I was always closer to Fabian. He helped me. If something wasn’t right, he told me. I always had a lot of respect for him.”

Bourzat is based in Novi, Michigan, at Igor Shpilband’s ice dance school, and Amodio went there to train with him in the fall and Bourzat came to his competitions.

Amodio, who studies to become a sports journalist, has always been a crowd favorite with his strong presentation, dance qualities and outgoing personality—on and off the ice. His short to “Le Concert” by Armand Amard and his long to “Blood Diamond” and “Lion King” have been well-received.

“I chose music that touched me,” the skater shared. “In the short program, I wanted a classical program. It is a difficult program, very sentimental and intense.”

His long program is a new creation, and shows what he has wanted to bring to skating in the past five years.

“Africa is a theme I’ve never done,” Amodio explained, adding that he found a very good choreographer in Sean Cheesman at the show “Art on Ice” last year.

In addition to Cheesman, Bourzat and Laurie May both worked with the skater on the choreography of his routines as well.

With just days before the European Championships begin, the two-time Olympian is training hard in order to be ready.

“We are working enormously on the technique, which is still the most important for winning medals,” said Amodio. “Claude doesn’t miss anything and this helps me to be high-performing every day in my programs and in my training in general.”

Like others, the 2012 European bronze medalist simply wants to stay focused and skate clean programs. He has planned the quad Salchow in both the short and long program, as well as a total of three triple Axels in both programs.

Bottom line, Amodio just wants to focus on the quality of his performance without putting any pressure on himself.

“I enjoy skating again, which is very important after a year with bad competitions,” he said. “I could have stopped. I’ve had good things (in my career), but I thought it would be a shame to stop now. I know my potential and I know that there is work to do, but I think it is a good challenge for me. If it works, great, if not, well, at least I’ve had good performances.”