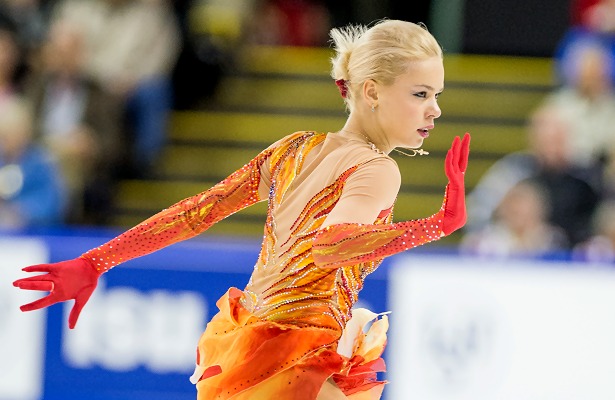 Anna Pogorilaya might be only one of many talented young skaters in Russia, but she is always one that makes sure to stand out. This starts off the ice, where the 16-year-old is always elegantly dressed and is usually seen with a fancy handbag. On the ice, Pogorilaya drew attention for her unusual exhibition programs this season. Not to mention that she also has had good results.

Earlier this fall, Pogorilaya won Skate Canada with two excellent performances, however, at Rostelecom Cup, she struggled with nerves to finish second. While the Muscovite qualified for her second consecutive Grand Prix Final, she placed fourth.

“The first half of the season was of changing success,” analyzed Pogorilaya. “It started so well with Japan (Japan Open) and Canada (Skate Canada), and then I started to fall apart, to put it mildly. Why, I do not understand. I felt more ready (for the later competitions) than for those (first) two competitions, but apparently I wasn’t able to pull myself together.”

At Russian Nationals, however, the 2013 World Junior bronze medalist turned in two solid performances with seven triple jumps in the free skating and no major mistakes to finish fourth. Since bronze medalist Evgenia Medvedeva is not age eligible for ISU senior-level Championships, Pogorilaya got the nod from the Russian Federation for a spot at the upcoming European Figure Skating Championships.

The federation has also left a door open for Olympic champion Adelina Sotnikova, who missed Nationals due to injury, and is currently a substitute for Europeans. While Sotnikova is scheduled to take part in a test skate on January 15, she recently said in an interview with Russian media that it is unlikely she will be ready for Europeans.

Pogorilaya was rather satisfied with her performances at nationals.

“I fought to the end,” admitted the 16-year-old, who finished eighth last year. “The jumps didn’t go so well in these two days. The legs were stiff. There were nerves, understandably, and this affected my performances.”

Last season, the student of Anna Tsareva placed a strong fourth at her first appearance at Worlds, and is now preparing for her debut at Europeans.

“It will be another experience,” said the Skate Canada champion. “I am happy that I am going to Europeans, but it should be a competition like the others for me. I will prepare intensely, of course. We’ll work on the mistakes that I’ve made this season. I don’t think there will be any major changes to the programs. We’ll just work on the consistency.”

Pogorilaya’s main rivals at Europeans should be her teammates Elena Radionova and Lisa Tuktamysheva, and most observers expect a Russian sweep in the Ladies competition. If Pogorilaya does well enough, spectators will get to enjoy her exhibition program.

At Skate Canada, she surprised everyone by skating to “Rise Like a Phoenix” by Austrian drag queen Conchita Wurst, complete with costume and hairstyle change during the performance.

“The idea came up after the Eurovision song contest,” explained Pogorilaya. “It was a fun idea, why not take it?”

In Russia, however, some politicians frowned upon the singer and condemned him, but Pogorilaya is more open-minded.

“What’s the matter? He sings very well and has a nice voice,” she said, adding that the program was well-received at Rostelecom Cup. “Everything else is not important. The idea that he is a boy-girl is also great. There could have been a scandal, but luckily there wasn’t.”

At Russian Nationals, the teenager came out with yet another extravagant program—this time to selections from The Fifth Element soundtrack, complete with orange-red dyed hair.

“My mother and I watched the movie and we had the idea we could do an exhibition program with it,” said Pogorilaya, adding that she felt she needed to do a new program. “Maybe we’ll return to Conchita Wurst later.”

The Rostelecom silver medalist might even bring some of her unusual ideas to competition one day.

“The hair dye we actually bought for the Firebird, not to dye the hair completely, but do highlights,” Pogorilaya explained. “However, there wasn’t enough time, and just before the performance you are thinking about other things. So we decided to use it for the exhibition program.”

The “Firebird” long program was a suggestion by the skater’s mother and her coach.

“They both came the same day into the dressing room and started to talk about Firebird, Pogorilaya recalled. For the short program, she uses “Adagio” by Albinoni, which originally was an idea for a show program.

“When I skated it (in training), suddenly everybody was saying, ‘You are skating so well to this music, why not use it for your short program?'”

Pogorilaya is also one of the rather few ladies to use lyrics, which are now allowed this season, for a competitive program.

For the upcoming European Championships, the Muscovite has just has one simple goal: “From myself, I am only expecting my best performance.”