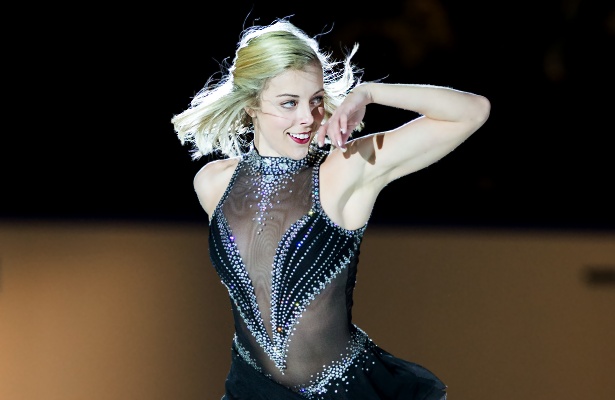 USA’s Ashley Wagner performs to “Love Me Harder” by Ariana Grande and The Weeknd.

USA’s Ashley Wagner won her third national title in Greensboro, N.C., on Saturday after laying down two solid performances. It was the first competition where she said she would do it, and she delivered.

After taking a week and half off after the Grand Prix Final last month, Wagner focused on making sure her technique was solid and pushed through her run-throughs.

“Nationals is a totally different beast of a competition compared to what I’m used to for this season,” she admitted. “It’s a huge mental challenge.”

Her short program to music from Spartacus featured a triple Lutz-triple toe, a triple flip and a double Axel, and was highlighted by level four spins and footwork. She scored 72.04 points to take the lead ahead of Gracie Gold by over five points.

“I hate to sound like a California kid, but it was totally awesome,” said the 23-year-old after the short program.

The skater, who is trained by Rafael (Raf) Arutyunyan, added that it was refreshing to be talking to the press and not having to explain herself regarding any mistakes.

“Beyond that, to put out pretty much what I’ve been doing in practice, as well as upping my technical difficulty, was huge for me,” said the three-time Grand Prix Final medalist. “I think that it is one of the stepping stones along the way to becoming one of the top ladies internationally.”

Wagner, who won bronze in the team event at the 2014 Olympics, admits that she has her work cut out for her due to a strong international field and needs a triple Lutz-triple toe combination to be competitive.

“I believe I got an edge alert (on the Lutz), but to even put the Lutz-toe out there, and to have a triple flip, that’s a gutsy move, especially at the national championships,” she said of the short program. “When I have my own moment out there, I feel like it is just me. That’s really great to be able to feel, but it’s tough to be able to get to that point. I will not feel like that all of the time, I know that, but to have that out there was huge.”

After the Grand Prix Final, Wagner took a week and half off and pondered the fact that she received full credit for her Lutz. She also understands that the Russian girls are coming into their prime and what she’s up against.

“As the seasons go by, I’m going to have to change the way I compete,” she noted. “Right now it’s easy to get wrapped up in one jump, but I just can’t focus on the triple-triple combination. It’s at the point where I need two triple-triples. It’s going to become a more well-rounded program rather than focusing on one huge element in particular. I need it all.”

In that regard, Wagner needs to get to the point where she can max out her programs technically with having Lutzes in her program.

“The Lutz-toe has better flow for the triple toe, so it just makes more sense for me to work on getting that comfortable in competition rather than forcing the flip-toe,” she explained.

Wagner knows what she is capable of and is aware that other skaters abroad have the exact same technical programs and pull out good scores.

While Wagner is considered a veteran in the sport at 23, she is still hungry to learn and improve.

“The whole reason why I’m with Raf is because I said, ‘Okay, I don’t have a triple-triple combination. I have a flutz. I have problems. How am I going to fix it?'” she explained. “The whole point I’m with him and working with him is because I want to improve. If I’m 23 and not improving, I’m wasting my time and wasting the audience’s time.”

Wasting the audience’s time was not an issue when Wagner took the ice for the long program in Greensboro on Saturday night. However, it wasn’t without having a bit of the jitters. As a matter of fact, she was “terrified”.

“It was anyone’s game,” she pointed out. “I don’t like banking on any type of lead. I had heard Karen’s (Chen) scores, and I knew right off the bat that this was an intensely fierce competition. It’s scary when you are standing on the boards and the doors shut and that’s it. This is the choice you’ve made, your skating. Raf just looked me in the eyes and said, ‘Just listen to your body and go skate.’ He did a great job keeping me calm.”

The 2012 Four Continents champion did just that, putting out a stellar performance to music from Moulin Rouge which featured seven solid triple jumps, including a triple Lutz-triple toe and triple loop-half loop-triple Salchow—all of which garnered positive grades of execution (GOE) across the board. The crowd was on their feet with a standing ovation before her record scores (148.98/221.02) were even shown.

“I am really, really happy,” she told the press. “I feel like Raf and I are finally starting to understand each other to the point that he can figure out how to make me calm when I’m absolutely terrified. Tonight was a stepping stone to what I think I’m capable of doing.”

Wagner credits her solid long program at the Grand Prix Final in Barcelona, Spain, for giving her the momentum she needed coming into nationals.

“It was huge for me to come from last place to the podium,” said the Grand Prix Final bronze medalist of her performance in Barcelona. “It was a huge accomplishment, especially against the best girls in world. I finally got to show a clean triple flip-triple toe.”

After the Final, Wagner commented that if “felt good to be a competitor again.”

“I’m one of the older girls competing and 23 is not even old, but the 15-year-olds in the sport make you feel a different way,” she explained. “I’m a competitor and I don’t like to get beat by girls. I’m not just some decoration in the sport that’s going to hang around until the bitter end. I’m not here to cling on to these dreams and memories, I’m here to make a name for myself. I’m here to stay.”

When asked to compare this season to last year, Wagner admitted that last year’s nationals was “horrifying”and that her performances at the Olympics, Worlds, and the Grand Prix events were unremarkable.

“I felt like people were starting to write me off and I wasn’t really giving them any reason to think I was competitive,” she said.

Therefore, this national title of all three is the “sweetest” for the skater who trains in California.

Wagner feels that the friendly rivalry she has with former national champion Gracie gold is good for the sport.

“It’s a sport that’s based on drama, and to have a rivalry like Gracie and I have is incredible,” she said. “I also think it’s nice, because I’ve seen some rivalries where it’s just nasty and people are mean to each other. I really respect Gracie as an athlete and I think we are polar opposites on the ice. Personally for me, she has been a gift in a way as she really pushes me. She is one of the reasons why I can’t back down and I need to push the technical elements. It’ll be interesting to see what the years to come will bring.”

Part of Wagner’s process in approaching competitions now is that she tells herself to be confident.

“It’s speaking it at first,” she said. “I try to be openly confident, but it’s not false confidence, it is genuine.”

“Because I had that plan, I was able to pace myself and make it to this nationals and have the mental endurance that it takes to be able to put out and deliver,” she explained. “I’m getting older, so I have to be able to skate smart. It (Figure skating) is not a natural sport for your body. If you want longevity in the sport, you have to listen to your body and take care of it.”

Wagner also revealed that her mindset going into competitions was tweaked as a result of a TV commercial.

“It was of this coach giving a pre-game speech,” she explained. “One of the quotes was ‘passion has a funny way of trumping logic.’ I have it written up on my mirror at home, and I kept on repeating that to myself before I went out.”

“I’m so endlessly in love with this sport and I’m happy I was able to go out there and let myself skate,” she continued. “Mostly, I’ve been so focused on upping the technical ante, that going into every single jump I was more focused on making sure I was over my side, making sure I had the right amount of speed, making sure my arm was here. So because I had those technical things to think about, I wasn’t focused on, ‘Oh my gosh, I’m going into a triple-triple, what am I going to do?’ So that is what helped me push through the program.”

Wagner has been named to the U.S. team for both the upcoming Four Continents and World Figure Skating Championships, however, she turned down the Four Continents in order to train for Worlds. Samantha Cesario will take her place and compete alongside Polina Edmunds and Gracie Gold.

“The U.S. Championships were a great event for me, but were also physically and mentally taxing,” she explained. “As for worlds, I think the US ladies show that we are a force to be reckoned with. It (U.S. Nationals) was a stellar competition, and the ladies do not usually put together such a great competition as a whole. Going into the World Championships, I think that we definitely have the technical side. I think we are starting to bring the artistry and the whole package. We are coming in hot and the world better watch out.”