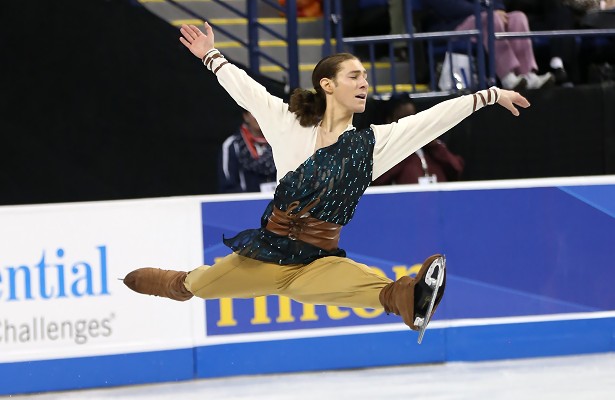 Jason Brown won his first national title at the 2015 U.S. Figure Skating Championships on Sunday night in Greensboro, N.C., in what was his fifth appearance as a senior at this event.

“I am so honored and humbled to be up here with these two guys,” said the two-time World Junior medalist of Adam Rippon and Joshua Farris, who came in second and third. “It’s been such a journey. I’ve been with Josh ever since my first year as a juvenile. We’ve grown up together and this is our fifth national championship that we’ve been to together. It’s just so cool to continue to grow together and I’m so proud of him. He was unbelievable today!”

Brown, who is coached by Kori Ade, put out a solid short program to “Juke” by Little Walter, nailing a triple Axel, triple flip-triple toe and a triple Lutz. He also earned a level four on all of his spins and footwork, and was awarded positive grades of execution (GOE) on every single element.

“I’ve been feeling extremely confident and very consistent this past month leading up to nationals,” said the 20-year-old. “I’ve really been training consistency. Every time I train a program, it counts.”

The skater, who won a bronze medal in the team event at the 2014 Winter Olympics in Sochi, credits his coach.

“Kori made this challenge with us,” explained Brown. “She wanted us to do 40 clean programs in 30 days. Four of those days I was on vacation, so it was in my head that I needed to get this done. You really put pressure on yourself to make sure every single program is the best that it can be. Because I’m such a competitive person, I wanted to get those 40 programs. By putting out that marker, I really homed in on that consistency.”

His long program to music from Tristan & Iseult was nearly as solid as the short. The 2014 Nebelhorn Trophy champion landed a total of seven clean triple jumps, but underrotated the second triple Axel. Nevertheless, he once again impressed with level four spins and footwork, placing second with 181.62 points and first overall with 274.98 points. It was enough to win the gold with only 2.5 points separating him from Rippon, who took first place in the long.

“Adam is so incredible, the way he puts his artistry…oh my God, it was so amazing and I am so excited for him!” Brown later told the press. “I was so excited for him and I wanted to keep that excitement going for the audience. I just could not be happier for him. It’s been so cool to share this experience with him.”

Brown chalked up his success from long hours of training, and once again, emphasized his work on consistency.

“It really paid off!” he said. “I was just out there checking it off the list, performing to the audience, and enjoying every single minute out there. I couldn’t have asked for anything else.”

Unlike many of his teammates, Brown does not incorporate a quadruple jump into his routines.

“There is so much room for me to continue to grow,” he explained. “I think that if I was maxed out on everything else, then I could understand the emphasis of the quad. It will come with time.”

In the meantime, the skater and his coach have reviewed the protocols from the Grand Prix events in Skate America and Rostelecom Cup to see where they could up the ante.

“We changed a few things around for later in the program,” Brown shared, “but we’ve been focusing on speed, how to look more like a senior man, and working on the GOE marks. I have two triple-triple combinations at the end of the program and changed the patterns so that the jumps are big with focus on the placement, timing, and breathing.”

Four years ago, Brown recalled the “magical” feeling when he debuted as a senior at nationals in Greensboro, where he finished ninth.

“It’s so fresh in my mind,” said the 2014 Skate America silver medalist. “Looking back, I can’t believe how much has happened since then. Back then, I just wanted to make the top 10, and now I went in as a contender for the title, so that’s really cool. I’ve grown as a person, I’ve grown physically, and have learned so much since then.”

In the past, Brown mentioned wanting to follow in two-time U.S. champion Evan Lysacek’s footsteps, and he is now the second man from the Chicago suburbs to win a title in eight years.

“Something that Evan was so incredible with was his work ethic and the way he was so consistent,” recalled Brown. “Every time he went out to perform, he was a competitor. When he took the ice, he was ready to fight and do what it took to do the best that he could do. I admire that in him.”

“So when I go out on the ice, I always want to follow in his footsteps and be able to come out of Chicago like he did and make a statement on the national scene,” he continued. “It’s really cool to be able to look at his values when it comes to skating, trying to live up to that and learn, and always continue to persevere through everything. He’s definitely been a big inspiration.”

Brown will compete again at the 2015 Four Continents and World Figure Skating Championships alongside teammates Rippon and Farris.