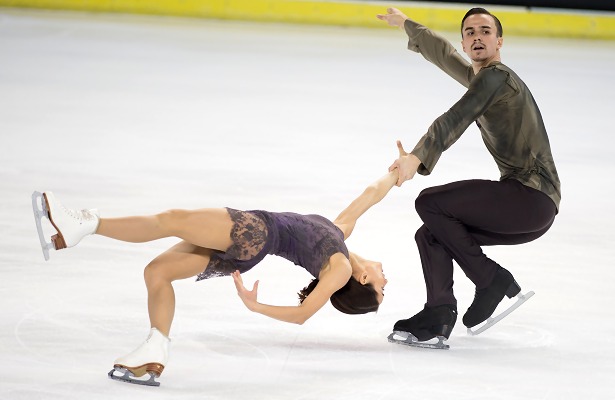 A year ago, not many would have predicted that Russia’s Ksenia Stolbova and Fedor Klimov would become two-time Olympic medalists. The two-time European medalists showed excellent performances in Sochi, earning the gold medal in the team event and the silver medal in the individual event behind fellow countrymen Tatiana Volosozhar and Maxim Trankov.

This season, Stolbova and Klimov, who train alongside Volosozhar and Trankov in Moscow in the pair skating school of Nina Mozer with her and coach Vladislav Zhovnirski, suddenly found themselves as Russia’s frontrunners as Volosozhar and Trankov withdrew from the Grand Prix series and Russian Championships due to Trankov’s shoulder injury and subsequent surgery in November.

Thus far, the team from St. Petersburg (that moved to Moscow in 2013) have dealt well with this new responsibility. They confidently won their two Grand Prix events at Rostelecom Cup and Trophée Éric Bompard with strong performances, however, at the Final, they finished second to Canadians Meagan Duhamel and Eric Radford, who included a side-by-side triple Lutz and throw quadruple Salchow into their programs.

In Barcelona, Spain, the 2014 World silver medalists made just one small error in the long when Stolbova singled the second jump in their triple toe-double toe-double toe combo.

“There was a little mistake,” Klimov agreed, “but as for the elements and the emotions overall, it was very good.”

Stolbova was not so forgiving of herself.

“I realized that I was either overrotating or underrotating it and I opened and had to save it how I could and I singled,” said the 22-year-old. “I am a fool. That says it all.”

Last week at the Russian Championships, the Olympic silver medalists defended their national title. The short program was clean, but in the long program, Stolbova stumbled on the throw triple Lutz and then fell on the throw triple Salchow—their last element in the program which is usually spectacular.

“The throws just didn’t work,” Stolbova explained. “I did hurt my groin a bit in practice the other day, but I did not feel affected by it. I hope that these mistakes won’t happen again.”

It was obvious that the team was a bit tired after having competed in three competitions with the Final concluding less than two weeks prior to nationals.

“We did not skate the way we can,” added 24-year-old Klimov, regarding nationals. “It is good that it is over and that it happened here. We’ll continue to work and we’ll fix our mistakes.”

Although up-and-coming Evgenia Tarasova and Vladimir Morozov, who train with them in the same school but under different coaches, beat them in the free skating at Nationals, Stolbova and Klimov are the top contenders heading into the European Championships in Stockholm, Sweden, at the end of this month. A year ago, they won the silver medal behind Volosozhar and Trankov.

Following a short break over the New Year’s holidays, the two-time Russian national champions plan on polishing their programs, but do not anticipate making any changes to their routines or adding new elements. Currently, the trend appears to be moving towards quadruple elements. At the Grand Prix Final, four out of the six pair teams performed a quad twist or throw quadruple Salchow.

“Nina Mikhailovna (Mozer, coach) said that this season we are working on the cleanliness and consistency to prove that last year wasn’t a fluke,” explained Klimov. “Next year it is very well possible that we will experiment with (new) elements.”

Their huge throw Salchow looks like a prime candidate for a quad, and the skaters have admitted giving thought to making a quad a while ago. However, their first goal for the season was to grow artistically and they picked two very different programs.

Their short program is to music from the soundtracks Crouching Tiger, Hidden Dragon and House of Flying Daggers, and has a martial arts theme. The dramatic long program is to selections from Notre Dame de Paris.

“Everybody was saying that “Notre Dame” music is overused, but we didn’t use the pieces that have been used before most of the time,” pointed out Stolbova. “We picked a few pieces and added the emotions. We are playing roles. I am Esmeralda and Fedia is playing two, three roles. We are putting on a mini story on ice.”

Her partner stressed how important it is for them to know what they are skating to.

“We are always doing some research about our programs,” Klimov explained. “I didn’t watch the musical, but I watched videos and I read a lot. If I see something new in these versions, I add it to my character on the ice. I think it is important thing to know which character you skate and what you want to show on the ice.”

“We usually want to tell a story,” he added. “We have a choreographer, and not only one, and everybody tells me what to do. But sometimes I think of my own moves and do what I feel.”

The pieces the team uses are “Your Love Will Kill Me,” “The Bohemienne Song” and “Dance My Esmeralda”.

“We thought about this musical before, but many have used it, and the pieces that had been used were without lyrics,” noted Klimov. “This year we are allowed to use lyrics and so we chose parts different from what was used before by others and that were interesting for us.”

Interestingly enough, the Russians, who have been skating together since 2009, used different versions of the music depending on where they skated. Earlier this season, they skated to an English version, and then had a French version for Trophee Bompard, and even a Spanish version for the Grand Prix Final.

“At this moment we haven’t found a Chinese version (for the World Championships in Shanghai), but we’re still trying,” Klimov said with a smile.

They also didn’t have a Russian version for the Grand Prix in Moscow and the National Championships in Sochi.

While Stolbova and Klimov will enter Europeans as the top favorites, the World Championships will be a different story. Not only might Volosozhar and Trankov come back, but they also will have to face Duhamel and Radford again.

“In general you can fight with everybody,” said Klimov. “You can win with other things (other than quads) and we’ll look for what we can win with.”