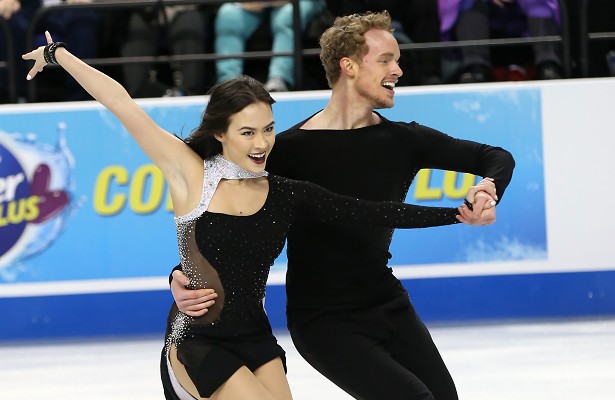 When asked how they felt about starting a new “legacy” becoming the new U.S. champions after Meryl Davis and Charlie White’s six-year run, Bates was quick to quell that term.

“I think it’s a great start and I’m ecstatic about it, like I said, but we’re not thinking about a big chunk or an era like ice dance has been in the past,” he continued. “I think ice dance these days is whoever skates well on that day can win based on so many factors and levels. We’re just happy to have won.”

Coming into the season, the team felt their training had went very well. Their goals for this new quad cycle is to just take it one year at a time, however, the 2018 Olympics are definitely in their sights.

The ice dancers, who are coached by Igor Shpilband, kicked off their international season earlier this fall at 2014 Nebelhorn Trophy where they finished second. They later took gold at both their Grand Prix events at Skate America and Rostelecom Cup, concluding with a silver at the Grand Prix Final (GPF) in Barcelona, Spain.

At nationals, Chock and Bates danced a flawless routine in which all their brilliantly choreographed elements hit the high points of the music with exceptionally good timing. They also earned a level four on both their straight line lift and twizzles, and placed first with 73.95 points.

“We did change a lot after Barcelona,” said Bates of the short dance. “This program has been seen now four or five times, and as we come into the second half of the season, it’s time to show we’ve progressed, that the program has developed.”

Their partial step sequence, which has been reworked since Barcelona, met two of the three key points with mostly +2 grades of execution (GOE).

“So far we’ve received good feedback on it,” he said of the changes in the paso doble. “It was a solid skate for us, but moving forward in the season, I think it will become a little more comfortable.”

“We wanted to show more of a range in our expressions throughout the dance,” added Chock. “We are really happy with our skate and can definitely see places where we’ve improved.”

The 2013 Four Continents bronze medalists performed a jazzy, flirtatious routine in their modern interpretation to music from An American in Paris. They skated with good speed and showed innovative lifts and an interesting retrograde footwork sequence to score 111.11 points for first place and overall (185.06).

“It felt so great!” said Chock. “The crowd was amazing and we could really feel the energy in the rink. We used that really well, and this was one of our best performances of the season.”

The team, which received no less than +2s and +3s on their GOEs across the board, also earned a level four on all three lifts, the twizzles, and combination spin.

It’s really exciting to have done that at the U.S. Championships, and we’re just excited to go forward and on from here,” said Chock.

The 2014-15 GPF silver medalists have had a relatively short journey to their title as they only teamed up in July 2011. Many did not feel that the partnership would not be suitable due to their different styles and the one foot height difference.

“We’ve definitely come a long way since we first started skating together,” acknowledged Chock. “That was a tough year. We just kind of threw everything together and it was such a whirlwind. I almost didn’t remember it.”

Despite their short time together, it is obvious that the team has grown.

“Even though we may not have as many years together as most teams might, I think we still have known each other for so long and we have great coaches,” said 22-year-old Chock. “We’re both really hard workers and we make it work. It’s good for us. We’re happy.”

Both skaters had previous partners. Bates competed with Emily Samuelson for 11 years before they called it quits, while Chock was with Greg Zuerlein for five.

“After skating with our previous partners for so many years, it was tough to readjust to a new partner, especially with our height difference being what it is,” Chock recalled earlier this season. “We are very aware of it, and I think we’ve worked well with it.”

“It’s still there,” Chock continued with a chuckle, regarding the height difference, “but we use it to our advantage. We want to make positions look bigger and stronger and play it with our angles. I think we’ve turned that somewhat into our strength. It was definitely a challenge, but I think we’ve adjusted well to it.”