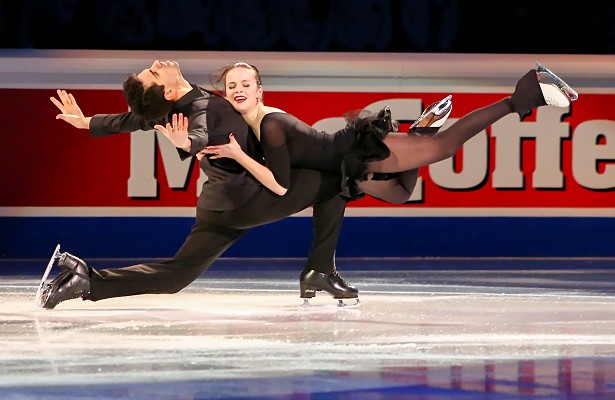 Anna Cappellini and Luca Lanotte perform in the Gala at the 2015 ISU European Figure Skating Championships.

The 2015 ISU European Figure Skating Championships were one of the most important competitions in the ice dance career of World Champions Anna Cappellini and Luca Lanotte.

“This was the test,” said Lanotte, 29. “It was about ‘Are the Italians back or are the Italians are done?’ We had to use our experience to turn the page.”

They did just that when they captured the silver medal in Stockholm, Sweden, last week.

The season began with a shock for the 2014 European Champions when they finished third at their first Grand Prix Cup in China, behind Gabriella Papadakis/Guillaume Cizeron of France and USA’s Maia Shibutani/Alex Shibutani. Their programs didn’t appear ready, and on top of everything, Lanotte fell right at the beginning of the free dance, throwing the Italians off.

“We weren’t completely ready for sure,” Cappellini admitted, referring to the subpar debut of the season. “The free dance choreography didn’t quite work out.”

It was back to the drawing board for the four-time Italian Champions, who withdrew from Trophée Bompard.

“I guess the toughest (thing) was to believe in ourselves throughout the practices in these past months,” Cappellini noted. “It was too easy to doubt everything we’ve done. We didn’t expect things to go so badly.”

Although the team from Milan skated well at Nationals in December, they admitted to being a bit nervous going into Europeans.

“It was unbelievably tough to skate with confidence (in Stockholm),” said 27-year-old Cappellini. “We were not the favorites to win at Europeans and Worlds last year, and that made it easier in a certain way. The buildup to this competition really stressed us in the short dance. It was very scary to be out there. My heart beat so strong that I could see it pumping through my dress!”

Nevertheless, the two-time Olympians didn’t let doubt and various opinions get in the way of their goal.

“If you don’t have the maturity and experience Anna and I have, it can seriously affect your performance,” said Lanotte, who sees their maturity and their connection as their strong points. “Every practice, we went out on to the ice and we wanted to show that we are the biggest, the strongest, and more mature.”

“I think we never tried so hard to deliver that link and make the difference compared to the other couples,” he continued. “If I think of the French couple (Papadakis/Cizeron), I think of softness, amazing skating skills, and long lines. Everything is like cream, Mascarpone. If I think of Elena (Ilinykh) and Ruslan (Zhiganshin), or even the other Russian couple (Alexandra Stepanova/Ivan Bukin), I think of energy. They are young, strong and have this energy, so we really had to play our strengths.”

The 10-time Grand Prix medalists sat in third following the short dance with 69.63 points. Their routine to “Capriccio Espagnol” was significantly improved over the beginning of the season, and the Italians picked up a level four for the twizzles, both Paso Doble sequences and the rotational lift, as well as a level three for the side by side footwork.

“It was a very meaningful performance for us, because we haven’t been competing (internationally) since the first Grand Prix, which wasn’t a great experience,” said Cappellini. “Our biggest satisfaction, before the score was that we felt like we skated how we can.”

Their free dance to “Danse Macabre” went very well, too. Cappellini and Lanotte earned a level four for all elements except the two step sequences, which garnered a level three, and skated with passion and dedication. They were ranked second in the free dance with 101.89 points and moved up to second overall at 179.97 points.

“We are happier with silver than anyone can believe,” said Cappellini. “It is worth gold to us. After such a rocky start to the season and a period of self-doubt and frustration, we were not sure if we could keep competing at the level we had last year. We are still here and we love it. We can compete at a high level. This is what we want to do. There was no better end to this competition for us than this performance and this medal.”

The ice dancers now have their sights on the upcoming World Championships in Shanghai, China, at the end of March. Lanotte acknowledged that their past performances at Europeans were controlled, but it was the best they could do at that time.

The team is currently training at home in Milan under Paola Mezzadri and will not go to any other competition before Worlds.

“We want to stay healthy, quiet, focused,” explained Lanotte. “There are two months, which are long, but also short for what we have in mind to do. We have to be strong and motivated, because Shanghai is far, but close at the same time.”

“The couples that were not (at Europeans) like Weaver/Poje and Chock/Bates, they are amazing,” Lanotte noted. “They are so precise, so strong. They didn’t have our beginning of the season. They are going to arrive at worlds with a certain confidence.”

“It’s going to be a fight,” his partner chimed in.