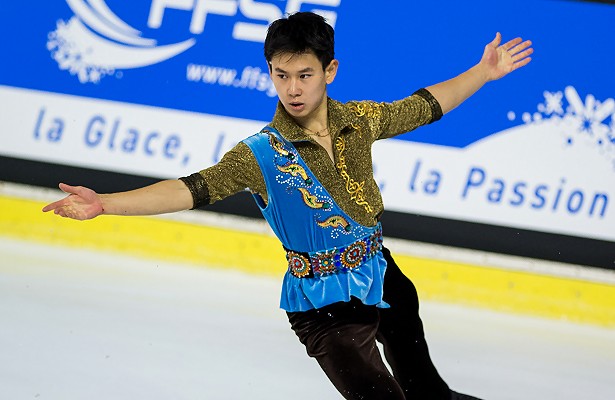 Kazakhstan’s Denis Ten, who kept a relatively low profile during the first half of this season, took gold at his sixth appearance at the 2015 ISU Four Continents Figure Skating Championships last month in Seoul, South Korea. This event in particular was special to the 2014 Olympic bronze medalist as he is Korean.

“I had been waiting for so long to compete there and I was really looking forward to doing well,” said the 21-year-old. “February is a special month. It is the month of the Olympic Games ant it’s important for every athlete to find a way to get to the peak of their shape and form in this month.”

Ten was indeed on top of his game. The 2013 World silver medalist skated a flawless short program to “Caruso” by Lucio Dalla, and cleanly executed every planned element. He was awarded many high grades of execution and earned a level four on all three spins and footwork. As a result, he was rewarded 97.61 points, the highest short program score thus far this season in the men’s field.

In his free skate to “Ambush from Ten Sides” and “Vocussion,” the 2014 Golden Spin of Zagreb champion pulled off an extraordinary performance in which the only glitch was a wobbly solo triple Axel. He set a new personal best score with 191.85 points and claimed the title with a total of 289.46 points—the third highest mark ever in men’s discipline.

“Frank (Carroll) stayed in the rink for a whole day because he had to manage three skaters in this event,” said Ten, who was glad he could share the victory with his coach. “He refused to take a rest. Now he could go back to hotel room and enjoy the rest of evening.”

Carroll wasn’t the only one was pleased with Ten’s performance. His long program, choreographed by Lori Nichol, received two “10s” in the components scores, one for Performance/Execution and the other for Choreography/Composition.

“Lori thought the character that I portray in the program is very similar to me, actually,” he said, adding that the music to Silk Road was initially planned to be a short program. “There is a funny coincidence that I was born on Silk Road. The street near my home was called, if translated to English, ‘silk way’. You can trace the history way, way back in the past. In the street, you can find a bazaar of fabric materials, because of the Silk Road, of course. So it gave us inspiration to develop this program and it changed our mindset to switch it into the long program.”

Despite a strong performance in Seoul, Ten feels he can still do more.

“It (was) nice, of course, but my program wasn’t flawless,” he pointed out. “It was quite stressful. For example, I made a mistake in my first quad when I landed too close to the board to do a combination, but I was glad to recover soon and avoided any invalid element. It is nice (to get a personal best), but not every time I score my personal best will I (always) be as happy.”

Ten, who placed fourth at Skate America and third at Trophée Éric Bompard earlier this season, is now looking forward to competing at the 2015 World Figure Skating Championships this week in Shanghai, China.

“It will be a great event!” he said. “It will be interesting to see what’s going to happen in the combination of skaters from both the European and the Four Continents, especially with Yuzu (Hanyu Yuzuru) in.”

After two great performances with huge scores in the Four Continents, the 2015 Four Continents Champion is now considered by many to be one of the top contenders in Shanghai, alongside defending champion Japan’s Yuzuru. In fact, this is going to be the first head-to-head competition for them since Sochi.

After his strong short in Seoul, he revealed he may up the ante.

“Maybe I’ll have three quads, two different types,” said the five-time national champion. “In Shanghai, I look forward to being better, because my free skate (in Seoul) was not flawless. We will see what strategy is right for me.”

“Now we don’t have obvious leaders like (Alexei) Yadugin and (Evgeni) Plushenko where everyone had to fight for the third,” Ten concluded. “Whoever does better than the others will achieve the highest result. My goal is to finish this season strong and skate as clean as possible.”