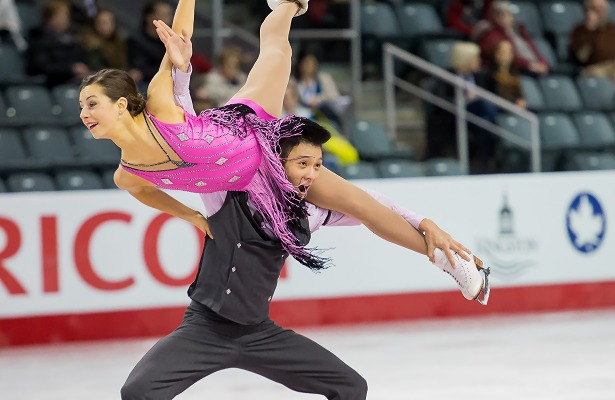 Canadian ice dancers Brianna Delmaestro and Timothy Lum had two main goals going into the 2014-15 season: medal at both Junior Grand Prix (JGP) events and win Canadian Junior gold in Kingston, Ontario. They accomplished both and are now eyeing the upcoming season from a senior standpoint.

Delmaestro, 19, and Lum, 20, who train in Burnaby, BC, under Megan Wing and Aaron Lowe, teamed up two years ago.

“I hadn’t really planned on skating any longer,” said Lum, regarding competing after he and former partner, Noa Bruser, parted ways. “However, I was convinced to take on another season around April 2013.”

Delmaestro had been his first choice, even from his first year as a junior.

“The timing was bad and just didn’t fit due to career choices that Aaron and Megan had pointed out to me,” Lum explained. “It only made sense when the time came to give it a shot, and it turns out we skate fairly well together!”

“The first time I tried skating with Tim, I knew that I didn’t want to skate with anyone else,” added Delmaestro, who competed during the 2012-13 season with Graeme Gordon. “Even though there were tons of improvements to be made, skating with him felt very natural.”

In their first season together, Delmaestro and Lum placed fifth at both their JGP events and won bronze at the junior level at the 2014 Canadian Figure Skating Championships.

“We didn’t have any expectations going into nationals last year,” said Lum. “I knew we weren’t in contention for first place, so we were quite satisfied with a top three finish! ”

The 2014 Canadian Junior bronze medalists kicked off their second international season together at the Ljubljana Cup in Slovenia, where they not only won silver, but posted a new personal best in the free dance.

“The personal best was nice and reassured us that we had made improvements since the previous season,” noted Delmaestro.

They went on to earn the bronze at the Pokal der Blauen Schwerter in Dresden, Germany, and were ranked ninth out of 64 teams worldwide on the JGP circuit. While they didn’t qualify for the JGP Final, the team was fairly pleased with the outcome of their season thus far, and buckled down for the 2015 Canadian Figure Skating Championships.

“Of course it would have been sweet if we would’ve gone to the Finals, but I wasn’t broken up about it,” said Lum. “In fact, I hadn’t really taken much thought into being in the Finals at all.”

Emotions going into this years nationals were different from last year for both skaters.

“There was definitely pressure on us, but my main goal was to just perform as well as we had been all season and to have fun and enjoy the experience,” she said. “I was confident in our skating and our programs, and I knew that winning was possible if we competed like we had been all season.”

In Kingston, Delmaestro and Lum placed first in both the short and free dance, earning positive grades of execution (GOE) in every single element, to win gold with nearly nine points to spare.

“I don’t think I could’ve settled for any other result, really,” admitted Lum. “Of course there was lots of pressure since it was our last year in juniors, but that’s like any other competition—you just can’t let it own you!”

“Being able to achieve our goals this year was quite rewarding and winning nationals was a good end to a great season,” added Delmaestro.

The Canadian Junior champions claim their free dance to “The Charleston,” “The Man I Love,” and “Shake That Thing” as their favorite of the two dances this season.

“It was so much fun to perform!” said Delmaestro. “It’s also a really great feeling when you can bring joy and happiness to people through your skating, and I felt like our free dance this year achieved that.”

The short dance for the 2015-16 season is the waltz, and for seniors, the tempo of the music throughout the pattern dance element must be constant and in accordance with the required tempo of the Ravensburger Waltz. The ice dancers may also choose any number of the following rhythms: foxtrot, march, polka.

“I actually quite enjoy waltzes, but damn is this Ravensburger hard!” noted Lum. “I think we will be doing a foxtrot to accompany our waltz, but nothing has been set in stone yet.”

As the young teams moves into the next season as seniors, along with Madeline Edwards/Zhao Kai Pang (training partners) and Mackenzie Bent/Garrett Mackeen, it is not lost on them that they will be entering a new stratosphere of ice dance. Canada has been be allotted three slots in ice dance at the 2016 World Figure Skating Championships, and assuming that 2010 Olympic Champions Tessa Virtue and Scott Moir do not make a return, the third one is now up for grabs.

Nevertheless, Delmaestro and Lum’s main goal for 2015-16 is to improve their overall flow and polish, while still increasing the difficulty of their elements, and to make a lasting impression at each competition.

“The focus for senior is always to make sure the team comes out technically strong and ready to perform at a higher level,” said Lowe. “Brianna and Tim improved so much from their first to second year, so we hope we can keep that progression going so that their jump to senior is a successful one.”

Both skaters take classes when time allows. Delmaestro is moving in the direction of nutrition, while Lum is working on a marketing degree.

When not training or studying, Lum enjoys a myriad of sports such as basketball, golf, lacrosse, and swimming. He is also is an avid watcher of television shows and movies.

“If there’s a show that I can really get into, I’ll follow it till the end!” he said. “I watched the very first episode of ‘Breaking Bad’ when it came out, and followed it weekly, even dealing with those pesky commercial breaks!”

Delmaestro likes to relax with Yoga, reading, and cooking.

“Reading gives me a little escape where I can immerse myself into another world for a while,” she explained. “I enjoy baking and cooking because I have such a passion for nutrition, so I love trying and creating new healthy dishes that taste delicious!”