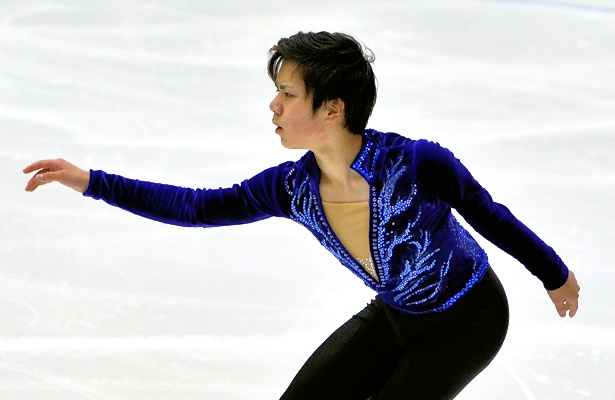 Shoma Uno is the fifth Men’s World Junior Champion from Japan, following the footsteps of Daisuke Takahashi (2002), Nobunari Oda (2005), Takahiko Kozuka (2006) and Yuzuru Hanyu (2010), who all went on to have a successful senior-level career.

The 17-year-old, who has been competing at the international junior level since 2011, made his breakthrough at the ISU Junior Grand Prix Final this past December where he won gold. It was his first time qualifying for the event and he smashed the competition as a result of his triple Axel and quad toe, which have become much more consistent.

With his strong win in Barcelona, Uno suddenly drew attention and followed up by taking the silver medal at the Japanese senior-level championships. This is exactly what Japanese skating needed as Takahashi and Tatsuki Machida retired this season.

Uno, who began skating at age five for fun when he went to the ice rink with his father, placed fifth in his international senior-level debut at the 2015 Four Continents Championships in Seoul, Korea, and then struck gold soon after at Junior Worlds in Tallinn, Estonia.

“At first I didn’t feel so much pressure at Junior Worlds, although everybody expected me to win after I won the Junior (Grand Prix) Final,” Uno recalled. “Then I started to feel it and put pressure on myself. On the other hand, pressure is something that motivates me, but I think in the free skating I felt it too much.”

The Japanese silver medalist made several mistakes in the free skating, but held on to first place (232.54) ahead of Boyang Jin of China (229.70).

Junior Worlds marked the end of this successful season and also the end of Uno’s junior career as he plans to move up to the senior level. The teenager knows what he needs to do in order to continue to be successful.

“In juniors, the expression is less strong than at the senior level,” he noted. “I think I need to work most on my artistic side. It is also important to get more consistency in my jumps. Overall, I have to work on both the artistic and the technical part, but improving the artistry is the most important.”

The Japanese Junior Champion has already made plans for the off season. After a short break at home, he plans to take care of injuries and then get back to work.

“I think I will change both programs,” he announced. “I don’t have a specific idea yet what we are going to do, but basically I want to change the style from this season and do something different. In general, I prefer calm music.”

The skater plans to wait and see what his coaches Machiko Yamada and Mihoko Higuchi will suggest to him.

“The coaches also told me that we are going to work on skating skills and power skating,” the newly minted World Junior Champion added.

Uno’s idol is Takahashi, one of the most expressive and outgoing skaters of the past years. The Junior Grand Prix Final Champion looks up to the 2010 Olympic bronze medalist because of his expressiveness and flamboyance on the ice.

Although Uno describes himself as “shy” and needs some time to warm to strangers, he has no problem with the new attention he is getting from media and fans.

“It is actually fun to have more attention,” he said. “The more audience is coming, the more I enjoy performing for them, but I don’t feel I became a big star. I’m happy if there is a lot of media when I’m skating, but off the ice I feel a bit embarrassed to do interviews and all that.”

Uno hails from Nagoya, the famous skating hub in Japan that produced champions such as Midori Ito, Miki Ando and Mao Asada. When he started out, Asada was still training there and one of his first memories of skating is chasing after her on the ice. A mischievous smile lit up his face when the recalled this little tidbit. His coach, Yamada, had already Ito, the first woman to land a triple Axel, as well as many other top Japanese skaters.

Uno, who looks younger than 17 as he is quite short, still goes to high school, but admits that he is focusing more on skating than on school. In his spare time he enjoys tennis and golf.

“I never was any good in sports, only in skating,” he said, laughing.

Uno is already looking forward to the upcoming 2015-16 season and hopes to leave a strong impression in his first year as a senior on the Grand Prix circuit.