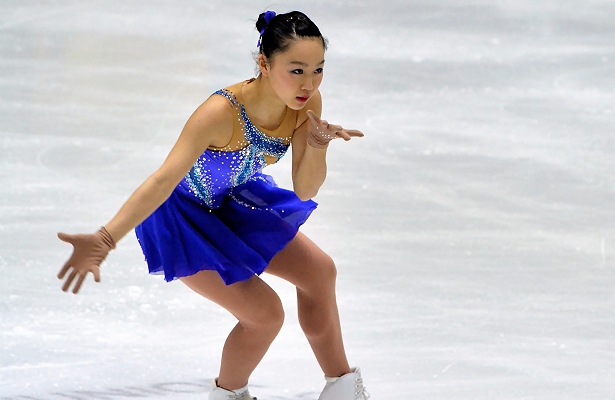 Japan’s Wakaba Higuchi took the junior scene by storm this season, showing all the qualities to become a top star like that of Olympic silver medalist Mao Asada, who burst onto the scene nearly 11 years ago.

The 14-year-old is like dynamite on ice—full of energy and spark with explosive jumps—and she knows what she wants. Her first international junior season was a success with gold and silver medals on the Junior Grand Prix and a bronze at the Junior Final, and followed up with a bronze at the World Junior Figure Skating Championships in Tallinn, Estonia.

Russia has won the gold for five consecutive years since 2011 at Junior Worlds, however, Higuchi looks ready for the challenge.

“My first international season was great,” noted Higuchi, who won bronze at the senior level at nationals. “I learned that you absolutely cannot make mistakes and you always have to skate clean.”

Higuchi began skating at the age of three and was soon flying over the ice, jumping, and spinning.

“My mother liked skating as a hobby and there are many basic skating classes in ice rinks in Japan,” she said. “I landed my first triple jump, the toeloop, when I was nine years old.”

One of her most vivid memories is skating to “Don Quixote” at a local competition when she was ten years old.

While Higuchi’s mother is still a recreational skater, neither her father nor her 19-year-old brother, Daisuke, or her 22-year-old sister, Saki, are involved in skating.

Higuchi is fully committed to the sport and practices four to five hours a day. Speed is one area that she distinguishes herself, as well as jumping.

“I have been aware of the skating skills in practice since I was little, therefore maybe I got that speed,” she said.

At Junior Worlds, the teenager showed a solid triple Lutz-triple toeloop, as well as a triple Lutz-double toe-double loop, and has been working hard on the triple Axel.

“I just need about a quarter of rotation more to complete it,” said the Junior Grand Prix Final bronze medalist. “It was not scary to do the triple Axel and I tried for the first time a year ago. I think you need the triple Axel to become the champion or to get a good result in international competitions.”

Like Tuktamysheva, the Japanese skater doesn’t exclude going for a quad one day.

“Just this season I’ve had too many competitions, so I wasn’t working on quads,” said Higuchi, who names Yuna Kim and Mao Asado as her idols.

“I met Mao Asada and got some advice for the triple Axel from her, but I’ve never met Yuna Kim,” said Higuchi.

Off the ice, Higuchi is studying in her second year of junior high school and her favorite subject is arts. In her spare time, she likes to draw Japanese anime and she also studies English by herself. In the future, she would like to become a coach.

“I’d like to become a coach, because I would like to teach other skaters skills, especially the jumps,” she shared.

Higuchi describes herself as “cheerful” and “always laughing”. She has an outgoing, friendly personality, but she is also very ambitious. When she made a mistake in the short program in the Junior Grand Prix Final that left her in fifth place, she was in tears, however, she fought back in the long program to move up to third.

For the next season, the World Junior bronze medalist has a clear goal: “Next year I’d like to come back to Junior Worlds and become the champion.”

Obviously, the ultimate dream is to win gold at the Olympic Games, and the teenager has a plan.

“First I want to become Junior World Champion, then World Champion, and finally Olympic Champion,” she said. “I want to take it step by step. In order to achieve my goals, I’ll have to upgrade my elements.”

Therefore, don’t be surprised if Higuchi returns next season with a triple Axel. Following Junior Worlds, the 14-year-old didn’t sit idle and has already begun her preparations for the new season. She unveiled her Mambo short program recently at a local competition in Tokyo, and has mentioned that she would like to skate to Tango or Flamenco music in the future.