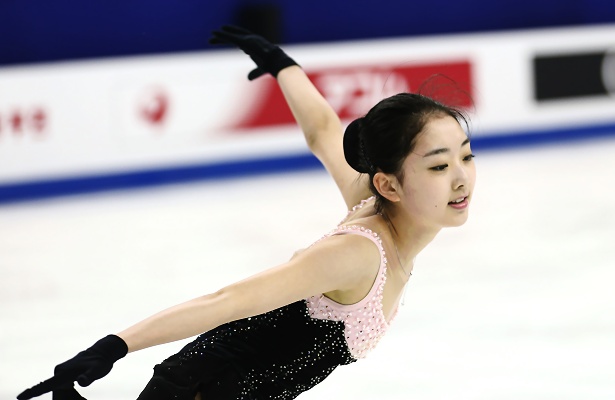 The 2014-15 season was not set up to be an easy year for China’s Zijun Li, who found herself without a head coach for the entire summer. After the Olympic season ended, the contract between Mingzhu Li and the Chinese national figure skating team ended.

As a result, the skater’s new programs were prepared late which somewhat impacted her early season performance. During the Grand Prix series, Li finished sixth at Cup of China and seventh at NHK Trophy. Skating fans in China were beginning to worry if it would be another disappointing season like the previous one when Li went through a growth spurt.

It wasn’t until October of this season that she began training under Haijun Gao.

“At the beginning, it was a bit different as this was my first time working with a male coach,” Li admitted, “but it gradually turned out to be great. I think we are really working together very well.”

After six months of training under Gao, the 2014 Four Continents bronze medalist feels that she has learned more mentally than technically.

“Every coach has different way of coaching,” noted the 18-year-old. “For Mr. Gao, he is really good at vitalizing the training environment. We all get tired during training, but he knows very well how to motivate us and keep us in a good mental condition all the time.”

As Li grew more adapted to the new training environment, she began to get back on track. In December, the skater from Beijing claimed her fourth national title and followed up with a fifth place finish at the 2015 Four Continents in February, where she was visually emotional after her free skate.

“It wasn’t because I really wanted to cry, but because I had a very tough season last year, as well as earlier this season,” Li recalled. “A lot had happened to me, injuries, changing coach, dealing with puberty. I couldn’t maintain good physical condition and perform the way I wanted. After the free skate (in Seoul), I felt I started to gain back some ground.”

Li needed this momentum going into the 2015 World Figure Skating Championships, which were being held in her home country for the first time.

“Before the competition I was extremely excited, because you have the chance to compete at home,” said Li, “but at the same time, competing at home created a huge amount of pressure. I really needed to push hard, and I forced myself to focus on the ice to deal with the pressure.”

Li started the event with a good short program, finishing sixth with a score of 61.83. The only flaw was an underrotated jump on the back end of a triple flip-triple toe. However, her free skate fell apart and she finished 11th in that segment and ninth overall.

“Actually, before the competition I didn’t expect much on my placement,” Li recalled. “I just wanted to perform as well as I could. I feel I could have done better in the free skate and achieved a better overall result.  I couldn’t seize the opportunity of competing at home, which was really regrettable.”

This is not unfamiliar territory for many athletes, and Li knows this.

“For me to face it earlier is better than later,” she said. “At least after the worlds, I am clearer on what I should work harder on.”

Li has been working with Lori Nichol for the past three years, and feels that the choreographer not only understands her style well, but is very encouraging and supportive.

“I think she is the best choreographer I’ve met,” she said. “We are currently in discussion about the new short program for next season, but I think I will skate to something slow. Something similar to my exhibition number, ‘I Dreamed a Dream’, for this season.”

While the skater doesn’t have any details on the new long program, she feels she is more suited to music at a certain tempo, especially in triple metre.

“I think it really suits my performance style,” Li explained. “It’s smooth, even, and without a sudden change in tempo.”

In addition to musical choices, Li will be making some tough calls on technical elements for the upcoming season.

“I may take the Lutz out,” she revealed. “Under the new rule (30% base value reduction for an edge error on the Lutz jump), I may easily lose many points on that jump, so it doesn’t pay out.”

However, to help balance the scales, the skater intends on raising the level of difficulty of other jumps.

“I may try two triple-triple combinations in my free skate,” she said. “One with a triple toe for the second jump, and the other with a half loop-triple Salchow at the end.”

If the plan is executed, that will be something never seen from Li, who used a triple flip-triple toe and triple Salchow-double toe this past season.

Nevertheless, the skater plans to make improvements step by step. After finishing seventh at the 2013 World Championships two years ago, followed by two tough seasons, Li aims at a strong comeback.

“I am getting along really well with Mr. Gao and gradually gaining back my momentum,” she said. “I will work real hard this summer, and hopefully I can bring out the best of me next season.”