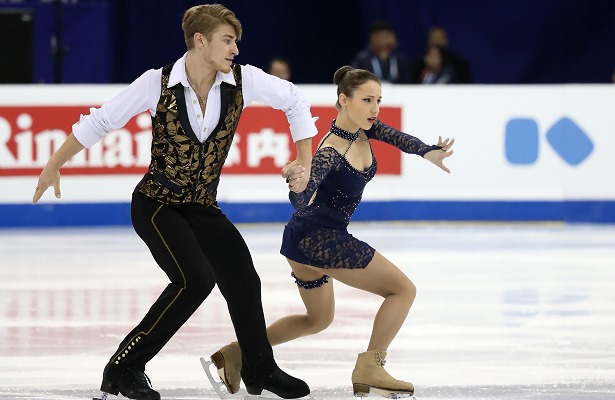 Nine months after teaming up, Russian pair skaters Kristina Astakhova and Alexei Rogonov found themselves debuting at the 2015 World Figure Skating Championships where they finished a respectable 10th. Not many had anticipated or believed that the partnership would be successful.

“They were not athletes of the highest level after all,” admitted coach Artur Dmitriev. “When (Tatiana) Volosozhar and (Maxim) Trankov get together, we know that they are both of very high level and it is promising. It was difficult to imagine how they would look together and I think they themselves had difficulties imagining it. The most important thing is that our team believed in them.”

Astakhova previously skated with Maxim Kudriukov until spring 2014, however, they both realized that they were not getting anywhere and she thought about retiring. Rogonov, 26, had split up with his former partner, Anastasia Martiusheva, and skated in shows. In April 2014, Astakhova received a message from Rogonov.

“It was straight forward,” 18-year-old Astakhova shared. “He said ‘letcs go and skate together.’ I thought if there was this possibility, why not try it? So we decided to try out in Novogorsk.”

Since the skaters came from different coaches, they had different techniques or training, so at first it was more difficult than expected. Astakhova had been coached by Sergei Dobroskokov, while Rogonov had trained for many years under Natalia Pavlova.

“Although they are both experienced pair skaters, interestingly enough they needed a lot of time to gel as a team,” recalled Dmitriev. “They couldn’t do the pair elements together, like the lifts, the twist, and the throws. The jumps worked right away and they more or less learned the spins, but they couldn’t do other pair elements that should come easily for two months. I was surprised. I didn’t expect that.”

Once they got the timing was down, however, everything started to happen much faster. Dmitriev, a two-time Olympic champion, was very pleased to see that the skaters had found a good connection and got along well.

“They are complementing each other,” the coach analyzed. “Liosha (Alexei) is active and Kristina was maybe too quiet. During the season, we were able to balance this out a bit. He became calmer and she became more active. For the first season, it is a good result that they made the national team and were able to skate difficult programs.”

“I think that Liosha (Alexei) and I did it the right way,” Astakhova pointed out. “We came together and chose a third version (as our coach), Artur Dmitriev. The two of us didn’t have a choice and we had to do it the way Artur told us and that’s it.”

“Everybody has their own experience, and to change the technique you’ve acquired over the years is not so easy,” added Rogonov. “In order to move forward and to progress, you have to perfect yourself at any age. When we changed coaches, it meant there was a new person with his own views. It is an interesting process when you realize that you are learning something new and the limit is still far away. You start to move forward in big steps.”

Their work paid off and the progress showed. The team won bronze at Cup of Russia where they were originally slated as alternates. They then finished fourth at Russian Nationals and were named substitutes for the World and European team. They were selected for Worlds when Ksenia Stolbova and Fedor Klimov decided to withdraw in order to focus on the next season.

“We were actually very lucky this season,” said Rogonov. “We had zero rating, but we got to the Grand Prix in Moscow, as a replacement. Getting third place, of course, by just one hundredth of a point, we were kind of lucky again. Then the same thing happened for the World Championships. We were substitutes and the news (to replace Stolbova/Klimov) came unexpected to us.”

Overall, the 2014 Volvo Open Cup champions were pleased that fate gave them so many opportunities—not in order to achieve certain placements—but to present themselves as a team.

“Thank God there were no serious injuries,” Rogonov summed up. “We basically went through this time smoothly. There were some ups and downs, but overall, there were not big failures. We have to credit Artur Valerievitch (Dmitriev) that he prepared us very well for the competitions. He added work-load or took some work-load off so that we didn’t get injured and were in good shape for the competitions.”

At Worlds in Shanghai, the skaters enjoyed their free time after the competition to do some sightseeing and enjoyed it very much. They then took a four-day break before resuming practice in Moscow at their ice rink, which is appropriately named “Metchta” (Dream). With choreographer Sergei Komolov and coach Dmitriev, they mounted their new short program to “The Artist” soundtrack and their free skating to a selection of different music pieces.

“There is still a lot of work ahead at the summer training camp, but most importantly, the frame and the footwork for the short program have been done,” Rogonov divulged, adding that Komolov suggested the music. “The footwork is very fast and difficult with the music. We have to move our feet quickly!”

Their free program is built on a story in which Astakhova is a puppet and Rogonov is her creator.

“I am trying to bring my creation to life,” Rogonov explained of his role. “The idea is quite interesting. In this program, the whole attention will be on Kristina. There is a specific choreography which will be interesting to develop. We’ll see how it works. The music is interesting and we want to skate to it, but right now it is still hard. In many places we are behind the music, but we will change some transitions as we have to show the elements and a story. All this needs time and we’ll work on it during the training camps.”

The Cup of Russia bronze medalists have already prepared a new lift for the short program. While they have been working on side-by-side triple loops and a triple toe-triple toe combo in practice, they have yet to plan to include the elements into their new routines.

“We are polishing and improving what we already have,” Rogonov explained. “For example, the side by side spin so that it will be as fast as possible and a level four.”

However, coach Dmitriev is thinking further ahead and is already contemplating a quad throw.

“We’ll work on it on the floor and on the lounge,” he said. “We’ll try to make the jumps harder. We have to get the basis on which we can build on further.”

The skaters are currently enjoying vacation and will then go to their first training camp in Sochi in two weeks.