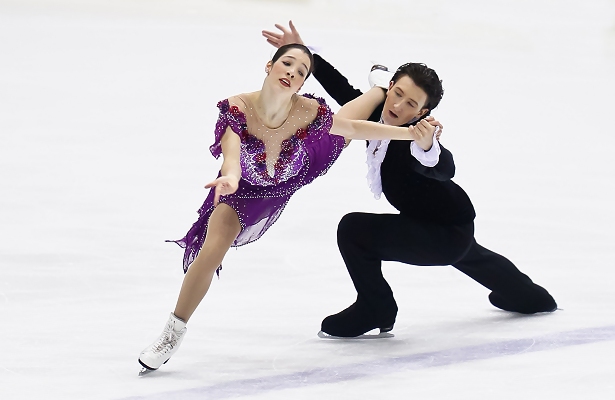 One significant thing that U.S. ice dancers Lorraine McNamara and Quinn Carpenter learned this past season was that no matter what happens in the beginning of the year, it doesn’t set the stage for the rest.

The team from Rockville, Md., is coached by Alexei Kiliakov, Elena Novak, and Dmitri Ilin and has been competing together since Oct 2006. Last year, they took bronze at the Junior Grand Prix (JGP) Final, bronze at nationals on the junior level, and fourth at the 2014 World Junior Figure Skating Championships. Going into the 2014-15 season, the ice dancers wanted to show their growth on the ice and that they were no longer a “little team.”

“We always want to skate our best and felt that placing well this season at our various competitions would definitely be attainable, but I don’t think we expected anything specific,” said Carpenter. “Improving our skating is always a major goals of ours. The specific things we focus on can and do change; some require a season to master, and others take more time. Whatever our current goals are though, we’re always striving to reach them and improve.”

One goal that was not reached was qualifying again for the JGP Final in Barcelona, however, all was not lost. The 2014 U.S. Junior silver medalists finished third at their first event in the Czech Republic and second a month later in Germany. At the latter event, the team was able to pull off a level 4 step sequence (diagonal in the Free Dance) for the first time in competition.

“After missing the Final, we were reminded not to get discouraged,” said Carpenter, 19, “although it was certainly a bummer.”

Two weeks before going to Greensboro, N.C., for the 2015 U.S. Figure Skating Championships, the team took a side trip with training mates Rachel and Michael Parsons to Poland to compete at the Mentor Nestle Nesquik Torun Cup. The teams placed first and second, respectively.

“It was not the initial plan,” said coach Novak. “We wanted to compete one more time internationally before Junior Worlds because we didn’t get to Finals this year. It was great because they were able to show the judging panel how much they had improved on their footwork and levels since the JGP events. There was a tremendous amount of progress made since then and it was really nice that they could show it off.”

Going into nationals, McNamara and Carpenter knew there were a lot of different possibilities for the potential outcome, but wanted to show that they had made huge improvements since the beginning of the season.

“We didn’t want to get too attached to where we might end up,” recalled Carpenter, “so we just focused on giving the best performances we could.”

And they did. The team placed first in both the Short and Free Dance to win their first U.S. junior title. “Happy” was an understatement for how they felt.

“We’ve been competing at nationals for eight years now, five of them on the junior level alone,” Carpenter pointed out. “So to finally take home the gold was extremely gratifying.”

Greensboro was also the same venue where nationals were held in 2011 when McNamara and Carpenter competed in their first year as juniors and finished ninth.

“Not only was it great to be back on familiar ice, but we got relive those great memories while we competed,” said Carpenter. “It was really special for us.”

“It was great to see that our hard work had shown itself,” said McNamara of their win. “It was also good that we could see the things we had to work on before Junior Worlds so that we could peak there.”

The newly-crowned national junior champs had nothing to lose once they arrived in Tallinn, Estonia, for the 2015 World Junior Figure Skating Championships.

“We definitely felt some nerves,” noted Carpenter. “The previous year had definitely gone well, but we had been edged off the podium during the free dance event despite having a clean performance. This year, we really wanted to prove to everyone just how much we deserved to be on top.”

McNamara and Carpenter showed a solid short dance in which they hit four out of six of their key points in the Silver Samba section. In addition, they earned a level four on both the twizzle sequence and straight line lift which garnered positive grades of execution (GOE) from all the judges. They placed third going into the free dance with a personal best of 59.10 points.

“The short dance was a blast!” said Carpenter. “The silver Samba is a very quick dance and getting the key points under control definitely took many hours of practice. Even though it wasn’t a flawless performance, the dance as a whole was really strong and we had a great time with all the Latin movements and expression.”

“It felt really good to put it all out on the ice with nothing to lose,” added McNamara. “Placing third after the short dance really gave us a boost of confidence going in to the free dance. We knew where we stood and we knew what we had to do.”

In their free dance to music from The Phantom of the Opera, the team picked up a level four for three elements and a level three for the circular footwork and the twizzles, however, their diagonal steps were graded a level two. Nevertheless, they scored a new personal best of 87.80 points, and with a total of 146.90, captured the silver medal.

“Junior Worlds was a fantastic experience all around,” said Carpenter. “We had two great performances, and though our free dance wasn’t our strongest skate from a technical standpoint, it was definitely one of our most expressive skates.”

Both agreed that they enjoyed performing their free dance at Junior Worlds more than any of their previous competition performances, and that it was the most rewarding.

“We ended up in a great spot overall,” noted Carpenter. “Getting second place was amazing. Of course our goal was first, but again, that isn’t why we skate.”

“It felt really great to know that all of our hard work paid off,” added McNamara. “The season was full of up and downs and we were so happy to accomplish what we had set out to do and prove ourselves.”

For the upcoming season, the Starlight Waltz has been chosen for the pattern for the short dance for junior level skaters. Like the Silver Samba, the dance was invented by Courtney J. L. Jones and Peri V. Horne and was first performed at the Queen’s Ice Rink in London, England in 1963. In addition, only one pattern will be required for this dance instead of two.

“This pattern is practically the opposite from the Latin theme last year,” observed McNamara. “It will be fun to portray completely different characters and show that we have good range in what we can express. We really love the performance aspect of skating and competing.”

“Starlight is definitely going to be interesting,” added her partner. “It undoubtedly requires very different technique to execute properly. Every short dance that we have skated to in the past has required two patterns of the selected dance, so it will certainly be different to only have one pattern skated in our short dance. Hopefully, it will allow for more choreography time in the dance than there has been in previous seasons.”

The team is currently working on their new free dance which promises to show a more sophisticated side to the ice dancers.

“I think what is special about Lorraine and Quinn is that they are both very passionate skaters,” said Novak. “They deliver the story line very well and have a good connection between them in this dance. I think that this program will show it even more. They are at the age now where they can show a more mature relationship. Kids grow up very fast and at this age, one year can make a big difference. It’s a very different feeling and it’s very exciting.”

Both skaters receive a great deal of support from their families, especially McNamara, who has four brothers and a sister.

“My family is so incredibly supportive,” she said. “They have always been our cheerleaders in everything we do since the beginning. Everybody has moved out except my closest brother and I. I absolutely love having the excitement of a big family.”

“I have one sister, Phoebe, who is actually adopted from China,” shared Carpenter. “She is seven and a half years old and joined our family in the summer of 2008. She is my absolute best friend!”

Carpenter is currently attending Montgomery College part time and plans to go to the University of Maryland in the future to earn a degree in mechanical engineering, while McNamara is going into her junior year at Connelly School of the Holy Child.

“It’s a local private school for girls that my mother and sister went to,” she said. “I really enjoy learning any subject related to science. Holy Child has really been great in accommodating me with my crazy schedule and frequent absences.”

When not studying or training, McNamara enjoys reading and dancing, but her favorite thing to do is listen to music.

“I love all types of music and actually really like music from past decades,” she said. “I think it is really interesting and entertaining to look at how music has changed over the years. Each decade had its famous bands and singers, but it’s impossible to pick a favorite group when it’s so hard to pick a favorite style. Each genre creates a different feeling inside, so my mood greatly affects what music I listen too. Depending on how I’m feeling, I’ll listen to anything from classical to rock to electronic.”

Carpenter lists driving as his number one hobby.

“I have loved cars for as long as I can remember, and ever since I got my driver’s license I have been driving myself everywhere my parents used to drive me,” he said. “Many people see driving as just a means to an end, getting from one place to another, but for me it is an extremely enjoyable experience. Driving is a break from the unpredictable experiences of life and provides a chance for me to take a deep breath between my daily endeavors. My car has a soft top, and my favorite thing to do during the summer is to put it down and go for a scenic cruise with some family or friends on a sunny weekend afternoon.”

The World Junior silver medalists are currently looking forward to competing at the Lake Placid Ice Dance Championships later in July as well as the Junior Grand Prix circuit.