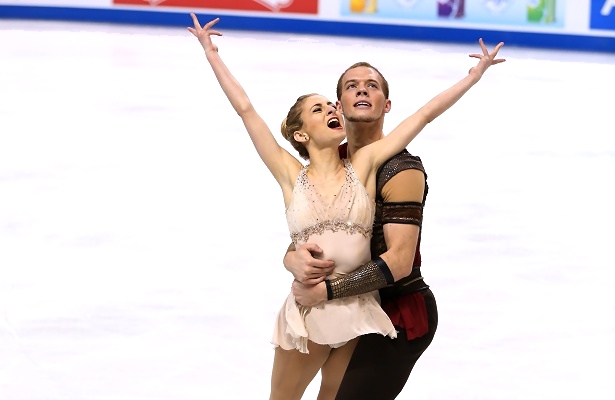 USA’s Tarah Kayne and Danny O’Shea had a short season this past year due to Kayne recovering from surgery for a labral tear in her right hip. The surgery took place last July, and although she progressed well with rehabilitation and therapy, there just wasn’t enough time to get in the training the team needed in order to compete during the 2014-15 Grand Prix (GP) season.

“It was an overuse injury that I had been dealing with for the entire 2014 season,” she explained. “In a perfect world, we would have had a few more months to train for nationals. Ideally, we would have had the full season and both GPs to prepare. That’s what I had in mind initially, but the preparation time was just extremely short after I returned to training.”

Despite the minimal training time, the pair, who teamed up in April 2012, was still able to achieve tremendous results. In early December, Kayne and O’Shea flew to Croatia and placed third at the 47th Golden Spin of Zagreb in their first international event of the season.

By the time the 2015 U.S. National Figure Skating Championships rolled around, the team was still behind in terms of training time, and Kayne’s hip was still not 100 percent. In fact, there were many times during her recovery period that they felt unsure whether they would be able to compete.

“I had no expectations going in to nationals,” admitted 22-year-old Kayne. “I thought, ‘If this goes well, then, great! If this goes poorly, well, I’m proud that we even made it here.'”

In Greensboro, N.C., Kayne and O’Shea, who finished sixth the previous year, placed fourth in the short and third in the long for an overall third place finish to capture the bronze medal.

“I am so extremely proud of what my partner and I accomplished,” said O’Shea. “I believe that medaling at nationals in any year is a great achievement, and to be able to do so five and a half months after she had major surgery made it even more special for us.”

“Going into U.S. Nationals, we recalled how we felt like almost no one had seen us compete last year,” the 24-year-old continued. “It felt like we were forgotten, so it was great to skate to the potential that we both knew we had, but just were not able to show everyone yet.”

The new U.S. bronze medalists went on to compete the following month at the 2015 Four Continents Figure Skating Championships (4CCs) where they placed eighth. One notable problem area was the throw triple loop in the long program, which was missed at both U.S. Nationals and the 4CCs.

“Leading up to nationals and the 4CCs, we were unable to train throws consistently in order to prevent further damage during the healing process,” Kayne explained. “The take-off and landing leg for the throw loop is on my right leg (my surgical leg). Post-surgery, I had difficulties generating the force and absorbing the force as easily as I could prior to surgery.”

“Tarah is an extremely strong competitor,” added her partner. “She fought hard, but the throw was much later in the long and at that point in her recovery, it was just more difficult to execute when her hip was already fatigued.”

While Kayne still currently experiences pain from time to time, it no longer keeps the team from training or pushing themselves to meet their goals.

“I am still in rehabilitation,” Kayne shared. “When I feel pain, I know that it is my body communicating with me, but now, instead of saying ‘stop’, it’s more like a ‘slow down’ signal.”

Their goals for next season are to have a strong Grand Prix showing and prove themselves to the international figure skating community.

“We are very excited to show off our skating to a wide range of people and share the love we have for this sport,” said O’Shea.

The skaters, who train under coaches Jim Peterson, Lyndon Johnston and Amanda Evora, are currently working on two new programs.

“Our new short program is very exciting, and always leaves me breathless because I get so into it whenever we perform it,” said Kayne.

“This program has an easy and comfortable character for me to fall into,” added O’Shea. “It is strong and exciting every time we skate it.”

Both skaters are very enchanted with their new long program. Upon hearing the music for the first time, O’Shea said it “gave him the feels.”

“The long is a newer and different feeling for me to take on,” said O’Shea, “but I love the music and I am really enjoying pushing my boundaries to create even better components and artistry.”

“I am very music driven and the story of both programs mean a lot to me,” said Kayne. “When we connect to music, it’s always a joy to perform the program and it makes a ‘long’ program a little less ‘long.'”

At the beginning of each season, the skaters like to play around with new elements and try to hone in on things they know they need in order to become an elite pair.

“As the season progresses, we narrow in on what is working and maybe leave some of the other ideas for another time,” O’Shea elaborated. “As for this season, we have really been working hard on our speed, which has been improving greatly as Tarah continues to get stronger with rehabilitation. We have also been working diligently on improving our twist and throw difficulty.”

“I believe we have really improved on skating quality,” said Kayne. “I really ‘feel’ like a pair skater now, and being so new to the discipline (this has been my only partnership), I feel we have really been gelling as a team and learning about ourselves as skaters this season.”

Both athletes train in Ellenton, Fla., and while skating is their top priority, they try to take college courses when they can. O’Shea is currently a part-time student at University of South Florida and is majoring in Mechanical Engineering.

When not training or studying, Kayne enjoys reading, writing and traveling.

“I also enjoy cosmetics and have a lot of fun applying makeup for the other girls at the rink for competitions. When I have time outside the rink, I love relaxing by watching movies and hanging out with Danny.”

Most of our time is very scheduled, however. This summer, the skaters, who are very close friends, are currently mulling over the idea of getting passes to Disney World.

“We have also been discussing the possibility of going to Chicago to visit Danny’s family,” said Kayne.

They are currently schedule to compete in July at a local event in Tampa, Fla., as well as Skate Detroit 2015. They have also been assigned to Skate America and Rostelecom Cup for their 2015-16 Grand Prix events.