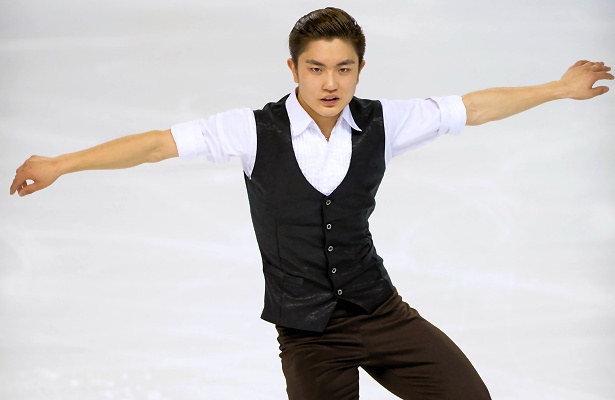 The past 2014-15 season did not go as planned for China’s Han Yan, who described it as a year of “accident(s), injuries and many ups and downs.”

It began at his first competition of the year—his first Grand Prix (GP) of the season at the 2014 Cup of China. The defending champion, who stood in third after the short program, suffered an on-ice collision with Japan’s Yuzuru Hanyu during the six-minute warm-up of the free skate. It was a hard hit for both skaters.

Hanyu suffered bruising to his chin and head, which later required stitches, hurt his midriff and left thigh, and sprained his right ankle. Yan sustained soft tissue injuries to his chest and shoulders. Nevertheless, both skaters continued with their skate, and Hanyu placed second while Yan finished sixth.

Two weeks later, Yan finished eighth at Trophée Éric Bompard, and was not able to qualify for the GP Final. By the end of December, and still in the process of physical recovery, the two-time Chinese champion finished second at the national championships.

In February, at Four Continents Championships in Seoul, Korea, things started to look up for the former bronze medalist. He gave two strong performances, refreshed his personal best with a combined total score of 259.47, and again claimed the bronze medal.

The following month, the 2012 World Junior champion competed at his second World Figure Skating Championships, which was held for the first time in his home country of Shanghai. Although he placed fourth in the short program, he struggled in the long and finished 10th overall.

“It was the first World Championships in China,” he noted. “There were so many people and Chinese flags around which made me feel very honored to be part of it. However, it also brought me extra pressure. I felt very nervous and overwhelmed. My short was good, so maybe I was thinking too much as well.”

In April, Yan competed at the World Team Trophy in order to prove himself to the judges and audience in his last competition of the season, and placed third.

“It was not perfect, but I was relatively satisfied with the result,” he said. “I think I achieved the goal I set for this event.”

In May, the Harbin native went to Canada to work with Lori Nichol, with whom he had worked with two years before, on his choreography for the upcoming season.

“We are getting along very well,” he said. “I think we are very alike in terms of personality, so I like to continue to work with her. When it comes to music, it is all about inspiration. She would recommend to me different themes and music, and when we feel inspired, we would go for that one.”

For the upcoming season, the skater will be using “Sing, Sing, Sing” for the short, which he recently debuted in an ice show in China. For the long, he will be performing to “Kissing You” from the Romeo + Juliet soundtrack.

“First of all, I definitely like to skate to slow tempo music, because it fits my skating style,” explained the 19-year-old, regarding the long. “Secondly, I was very sure I wanted to try something new. It was not that long ago since I moved up to senior circuit, and I don’t think I have found my style.”

“In past seasons, my programs are kind of a comedy as Lori thinks I am a humorous person,” he continued. “Fans really liked those programs, but I think there might be some other styles that would fit me more, so I wanted to try something I’ve never done.”

Hence, the choice of a love ballad, although the skater himself hasn’t watched the movie yet. In addition, the two-time Four Continents bronze medalist has yet to decide the new layout.

“We need to first take a good look at the renewed scale of values, levels, etc.,” explained Yan.

Nevertheless, the 2013 Grand Prix Finalist revealed his thoughts on the difficulty.

“For the coming season, I want to put two quadruple jumps in the long program,” he shared. “Actually, it was the plan for past season, but I couldn’t do it due to the accident and injuries, so I will do it this season.”

In fact, the skater already tried this out at the World Team Trophy in April, when he suddenly changed the jump plan and executed a second quad in actual performance without conferring with his coach.

“I wanted to give my coach a nice surprise,” he explained. “This event was quite fun, so I treated it as a run-through practice and decided to challenge myself (with two quads).”

Although his coach Shuguang Jia was not present at the World Team Trophy, Yan made it clear that there was no coaching change and will continue to train under Jia in Beijing for the upcoming season.

Currently, Yan is practicing not only the quadruple toe, but also the quadruple Salchow, however, he has not yet decided whether he will put a quad Salchow or another quad toe in the program.

“It depends on my training outcome and my overall condition,” he explained. “It is not fixed yet.”

Yan also feels a program with at least two quads is a “must have” for top skaters.

“The competition is getting very tough now,” he acknowledged “Everyone is so strong. I need to try my best to catch up with them.”

On the same token, Yan also realizes that it is important to improve on other aspects of his skating.

“During practice, my hit rate for the quads is not bad, however, I have many other problems to solve, and I will keep improving myself.”

Moving forward, Yan reflects on what he gained from the accident that occurred earlier in the year and how it can help him in the future.

“The accident is not all negative at the end of the day,” he said. “Through the tough experience, I have become mentally stronger, more determined, and my goal is clearer. My goal is to make history in Chinese men’s figure skating. I want to be the real No.1 man in China’s skating. I want to break all the Chinese men’s records, the first junior world champion, the first grand prix series winner, best result in all kinds of championships, etc.”

As aggressive as it may sound, the 19-year-old is not very far from achieving his goal. Yan has already refreshed the record of the Chinese men’s result in the Olympics when he finished seventh in 2014.

Now he is aiming for the World Podium. The current record is Chengjiang Li’s fourth place finish in 2003.

“It was regretful that I didn’t seize the chance at home this year,” said Yan, “but to have this kind of experience at this early stage in my career is good for me in the future. Being the first and only junior world champion in China definitely brings extra pressure, but I will turn this pressure into motivation and train hard to achieve my goal.”