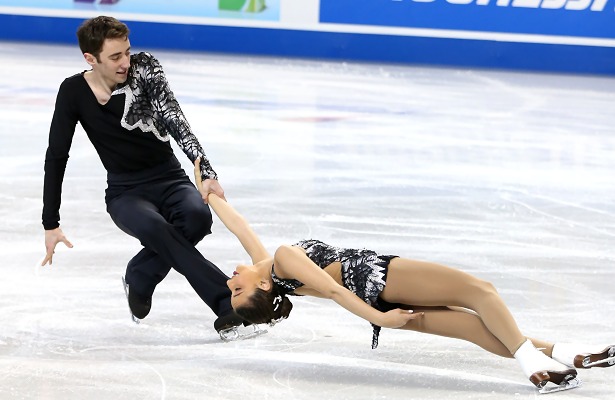 “Although we were extremely happy with our coaching staff in Illinois, we felt that to further our careers and reach our full potential we needed to move to an elite training facility and be surrounded by other pair teams,” explained Simon.

“Not only are we more motivated here, but it also gives us access to resources we didn’t have before,” added Weinstein. “So far, we have been extremely happy here!”

This past season, the young team debuted on the international level, placing fifth and seventh at their two Junior Grand Prix (JGP) events.

“Our skates were not completely clean in Ostrava and Dresden,” acknowledged Weinstein, “so our mind set going into U.S. Nationals was to give it our all and skate the best we’ve ever skated.”

Prior to the 2015 U.S. National Figure Skating Championships, the team prepared a bit differently than they had for other competitions.

“We came up with ideas on how to control nerves and to not let the pressure get to us,” said Weinstein.

“Although it was our first year on the junior level, we felt that we had plenty of experience going into nationals,” added Simon. “Having two JGPs taught us a lot about how to compete under pressure. We learned our strengths and weaknesses well and were able to focus on those going into nationals.”

“We were extremely happy with our performance and placement in short program,” recalled Simon. “We skated like we had been practicing and performed everything pretty well. We also got a personal best, which is what we were aiming for.”

Unfortunately, things didn’t go quite as smoothly in the free skate, and mistakes were made which resulted in a fifth place finish and fourth overall.

“Although our performance was disappointing to us, we were very happy with our overall placement,” said Simon. “Getting fourth our first year as juniors was amazing and we were ecstatic!”

His partner agreed, adding: “Our mind set for nationals taught us many lessons, mentally and physically. Now, we are both so excited for the season to come and hope to accomplish all of our goals.”

Weinstein, 15, and Simon, 18, both learned a great deal from their first outings on the international level.

“We learned how to adjust to time differences, new foods, different altitudes, and a whole new experience of competing,” said Weinstein. “These new experiences helped us to finish out the season strong and will also better prepare us for this upcoming season.”

After nationals, the team took a short break before returning to training.

“Until we moved to Colorado, we were pretty much working on elements and stroking with our coaching staff in Illinois,” said Simon. “Recently, we started training full programs while still learning new elements. Training in the much-increased altitude of Colorado Springs has been difficult, but every day we feel our stamina is improving and we are pushing ourselves harder to be fully prepared in competition.”

“We have also added a lasso lift to our long program,” Weinstein revealed.

“We’ve upped many of the levels and difficulty in our other elements and are working hard on getting a solid triple twist,” Simon added.

Since moving to Colorado Springs, the team has been pushed hard by their coaches on their skating skills.

“Whether an element is executed well or not, we will redo any section where our skating skills are weak,” said Weinstein. “It’s the drive of our coaches that have motivated Jacob and myself to work really hard on our skating skills in and out of our programs.”

“We’ve also really concentrated on our second mark, incorporating a lot of emotion and expression into our skating,” offered Simon. “We feel that our technical aspect is pretty good and improves with repetition of our elements, and we’re working really hard on our stroking and choreography for this season.”

“In the short amount of time I’ve had with them, they have shown me that they are fully committed to their goals this year,” said Sappenfield. “They are hard working, disciplined, and determined athletes. To me, that is a reflection of the good coaching they received in Chicago. I am excited to continue working towards our goals as a team and seeing what our journey will bring.”

Weinstein and Simon also recently began taking off-ice lessons with U.S. Champions Alexa Scimeca and Chris Knierim to work on expressions and connection in their skating.

This season, the team is using music that their coach heard in France (unknown at press time) for the short program and selections from An American Tail soundtrack for the long. The skaters debuted the short program at the 2015 Broadmoor Open, and both routines were also used in competition at 2015 Skate Detroit this past weekend.

“Usually we choose music pieces with a theme and we just play off that, but not this year,” said Weinstein. “We have been working hard with Dalilah on the ice and Drew off the ice on how to really connect with each other. By the end of the season, we hope to have a message portrayed to the audience through our emotions and connection.”

Since their move to Colorado, Weinstein began her sophomore year through Keystone Academy, while Simon plans to take classes part time at the University of Colorado in Colorado Springs this fall.

In her free time, Weinstein enjoys shopping and spending time with her friends, however baking is her favorite.

“It’s such a stress reliever and I love bringing my creations to my friends for them to try!” she said.

Simon likes to play tennis, frisbee, and cards. He also likes to ski although he rarely gets time to do it.

“I basically like to do anything outside,” he said. “I also like to play basketball, and recently I’ve been fishing with my new roommates and it’s a blast!”

The goal for the skaters this season is to show the audience and judges how much their elements and skating skills have improved.

“We really want to show our potential,” said Simon. “We want to do our best on the international circuit and aim to pull in some medals for the USA! Ultimately, we’d like to have a great performance at nationals and an even greater performance at Junior Worlds.”