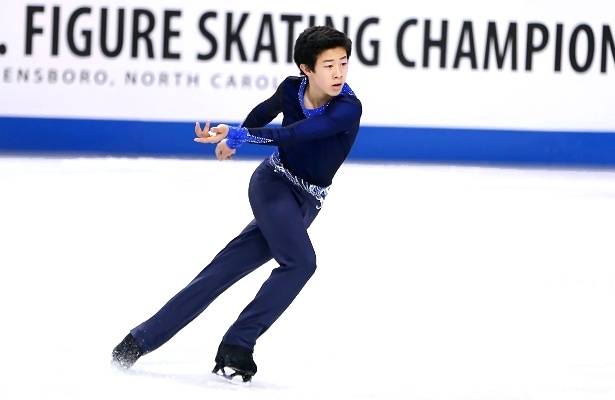 While bad luck and injuries have plagued USA’s Nathan Chen this past year, the 2014 World Junior bronze medalist pushed through the season with grace and determination in his debut as a senior on the national level.

Chen, who is coached by Rafael Arutyunyan and Nadia Kanaeva, has been struggling with a heel injury since last summer. During the first part of the season, he also sprained a muscle that connects the hip to the back. As a result, he opted out of one the Junior Grand Prix (JGP) events in hopes that he would have time recover for the second half of the season.

“The growth plate in my left heel hasn’t been able to fuse completely,” said Chen, who finished second at the JGP Croatia Cup. “Every time I did my jumps, especially my quad toe, it would put a lot of strain on that growth plate which would pull it apart a little bit—kind of like a stress fracture.”

Unfortunately, the heel injury became even more aggravated a week before his senior debut at the 2015 U.S. Figure Skating Championships.

“Two weeks before nationals, I felt really strong and confident and was having pretty good run-throughs,” said the 2014 U.S. Junior champion. “Then the pain just grew worse. After a week, I wasn’t even sure I could compete. I told myself, ‘I got this far, so just push through it.’ It wasn’t even about placing anymore, but just getting through the competition.”

In Greensboro, Chen performed scaled-back versions of both his short and long program to place eighth in his senior debut at U.S. Nationals.

“There was no way I could have done better,” said Chen, who turned 16 this past May. “The pain meds made me sick and I was throwing up a lot. I felt like I lost of lot of energy.”

Chen then took two weeks off to recover, but still wasn’t able to train as hard as he needed in order to prepare for the 2015 World Junior Figure Skating Championships.

“I was feeling ok health-wise when I got to Tallinn,” said the defending bronze medalist. “My hip and back felt ok, but not the heel. I knew I wasn’t ready for the event. I had been told by the doctor not to do any toe, Axel or Salchow jumps, so I pretty much stuck to that after nationals while training.”

“I honestly wanted to win, but knew that I couldn’t as I wasn’t at 100 percent,” he explained. “Again, the goal was just to get through it.”

With the exception of a fall on the triple Axel and an edge call on the triple flip (in combination with a triple toe), the skater had a fairly solid short. He was awarded a level four on two of his spins, as well as his straight line footwork sequence, and finished ninth with 69.87 points.

“I was just ridiculously cautious going into that triple Axel,” explained the skater, who trains in Artesia, Calif. “Going into the long, I knew I wasn’t going to be able to place, but I just wanted to do better than the short.”

In the long, Chen stepped out of his opening quad toe, but managed to hang on to the landing of his second quad toe (in combination with a double toe). He went on to land six more triple jumps while showing good spins and footwork, placing fourth with 143.98 points. With a total score of 213.85 points, the skater just missed the podium by 1.6 points.

“I was pretty happy with that program,” said Chen, who was relieved it was over. “It’s really been a rough season.”

Shortly after Junior Worlds, Chen went to the Olympic Training Center (OTC) in Colorado Springs, Colo., for four weeks where he underwent a great deal of rehabilitation as well as strength training.

“I just wanted to put the season behind me and start moving forward to the next,” he said. “One thing I learned is that you really have to have a good base. It’s also important to have good warm-ups and cool-downs when training and competing to prevent injury. Before I went to OTC, I had like zero strength background, but now I have someone I work with and report to for strength training.”

Since Junior Worlds, Chen has grown nearly two and half inches and believes that the growth plate in his heel will be completely healed in about a year.

“Right now, I’m just mostly focusing on improving on all my elements as well as my artistry,” he said in regards to his current training. “I’m doing all the jumps, but I’m working on the Axel a lot. Another area that I’m hitting hard is my speed. If I can improve that, I think my component scores will go up a bit.”

“Nikolai chose this piece and I’m enjoying interpreting the music as the program grows,” he said. “Initially I felt the music was kind of bland, but now I like it a lot. I feel like I’m connecting it with it more and more.”

Chen recently debuted his new long at the 2015 Broadmoor Open, where he finished first; however, both programs were downgraded as it was the first competition of the season for the skater. In the short program, the skater landed a quad toe-triple toe and triple Lutz, but fell on his triple Axel. His long featured a quad toe and triple Axel in addition to six more triple jumps.

“I felt that as this was my first competition of the season, I was happy with how I did,” he said. “If this was an international or national championship event, I would definitely not be happy with the way I skated. My programs are designed very well, thanks to my choreographers, however, I just need to really fine tune everything and then add harder elements.”

His next competition is Glacier Falls which will be held later this month in Anaheim, Calif.

“I would love to go to senior worlds this year,” said Chen, when asked about his goals. “I definitely want to make the JGP Final as a more solid goal. I want to stay healthy the whole year and compete to my fullest potential.”