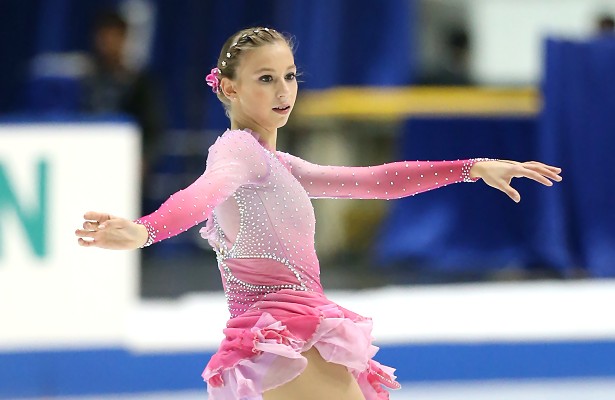 The 17-year-old, who trains under David Glynn and Nina Edmunds in San Jose, Calif., also met several personal goals this past year—one of which was to achieve high levels in her footwork and spins.

In September, Edmunds kicked off the season with a win at the 2014 U.S. International Figure Skating Classic in Salt Lake City, Utah. In November, she placed fourth and eighth at her two Grand Prix (GP) events in China and Japan.

At the 2015 U.S. National Figure Skating Championships, Edmunds gave a solid short program which was highlighted by a triple Lutz-triple toe and a level four on all spins and footwork for a third place finish. In the long, however, the defending silver medalist fell on a triple Lutz which cost her points and resulted in a fourth place finish overall.

“I’m OK with everything that happened,” she told the press. “I pretty much fought for everything in the second half of the program. Even though I fell, I got up and continued the program and showed my fighting spirit to land the other jumps. I’m pretty happy with that.”

“I had all the elements and my practices were pretty consistent,” Edmunds recalled. “I did not make any changes going into that competition.”

In Seoul, South Korea, the 2014 U.S. International Classic champion put out two strong programs, winning the title in her debut at this event.

“I skated a great clean short program, and that brought me confidence for the long program,” said Edmunds. “I felt relieved after skating two clean difficult programs to have been in first place; I was happy I was awarded for my performances at such a big event!”

With five competitions under her belt, the new Four Continents champion was ready for Worlds.

“I was pretty confident after my 4CC win because I knew I could skate two clean programs, and that in itself is a goal of any skater,” she said.

In Shanghai, Edmunds once again put out two good programs for an eighth place finish, although she had hoped for higher.

“I know that I had very difficult elements in my programs technically, and I thought I would be rewarded for that,” said Edmunds. “This is a sport after all, and to keep up the difficulty at every competition and perform clean, is extremely difficult.”

Back in training, one area that Edmunds has been focusing on is the triple flip, which received several edge calls this past season.

“From the beginning, I learned a correct triple flip,” she explained. “Last year when I was growing, I changed my timing and there was a slight rock in my takeoff. This summer I was working with Alexander Fadeev, who helped me return to my former timing on the takeoff the jump.”

In addition to her jumps, Edmunds has been working on power, as well as the details of her programs, to show more maturity.

“I feel like my new programs will be very elegant and strong,” she said.

The high school senior has two new programs for this season, both of which were choreographed by Rudy Galindo.

“We have chosen a famous classical piece for the short program where I am showing my maturity, power, and classic lines,” she revealed. “My long program is to music from a wonderful Oscar Award winning movie where I am expressing the main character of the story. It’s a difficult piece because we have combined four different tempos of music, with emotions and different times of life as the main character grows.”

Edmunds has been assigned to two Grand Prix events for this fall: Skate Canada and Rostelecom Cup. She will first be competing in two weeks at the 2015 Glacier Falls Summer Classic in Anaheim, Calif., followed by an ISU Challenger Series event later this summer.

On 22 July, Edmunds will be throwing out the first pitch for the Oakland A’s baseball game against the Toronto Blue Jays. On the same day, she will also be participating in the 16th annual Root Beer Float Day to benefit Type 1 diabetes research.