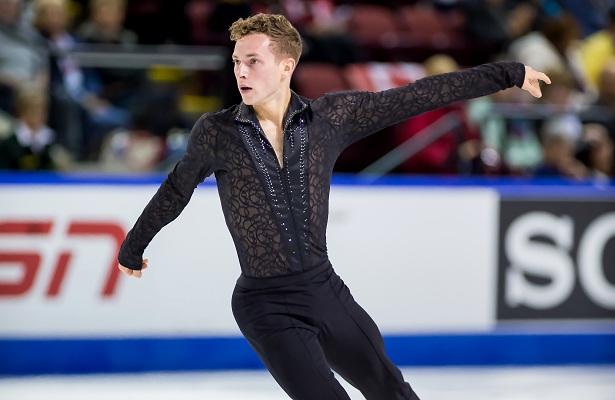 USA’s Adam Rippon had a season filled with ups and downs last year, however, he came through in the end and that’s what he’s most proud of.

“I think everything happens for a reason,” said the U.S. silver medalist. “I believe it’s how we deal with the situations we are put in and how we deal with them that define us. If I could go back in time to the beginning of last season, I would just tell myself to relax and believe in myself a little more.”

The 25-year-old placed 10th and fifth at his Grand Prix events in Canada and France, before winning his second silver medal at the 2015 U.S. National Figure Skating Championships.

“I really lost so much of my confidence from the end of the 2013-14 season that it took a while, and a few more disappointing performances, to finally let go of my doubt,” Rippon explained.

“This season, I learned to truly trust my training and to know what I was doing at home was enough and would work when I needed it too,” said the two-time World Junior champion. “So many times I would get to an event and wonder if what I had done was enough, and by the end of the season, I was no longer wondering because I pushing myself every day to my max.”

Since worlds, training has been going well for the skater who is coached by Rafael Arutyunyan, Vera Arutyunyan and Nadezhda Kanaeva in Calif.

“I have two amazing programs set for next season and I’ve been working like a dog to get the ready for the next few months,” said Rippon.

This season, his short program is set to Queen’s “Who Wants to Live Forever” and was choreographed by Tom Dickson.

“This music was my choice after some talk with my coach Rafael,” said Rippon. “He simply said to me, ‘I love Freddy.’ Tom loved it as well. I have been working with him for the past three seasons and I am so lucky to have him on my team.”

Rippon has always wanted to work with Jeff Buttle and he got the chance when they decided on using a Beatles medley for his long program. The selections include: “Because (The World is Round),” “Get Back,” “Yesterday,” and “Sgt. Pepper’s Lonely Hearts Club Band.”

“I love this program!” said the 2014 Finlandia Trophy silver medalist. “I feel fun, sexy, beautiful, and really powerful when I perform this piece. It’s incredibly challenging and most definitely the hardest choreography I’ve done to date.”

Over the summer, the skater has mostly been focusing on getting his stamina back and improving his jumps.

“Rafael, has been really pushing me to do more quads,” shared Rippon, with a laugh. “Who says you can’t teach a 25 year-old-dog new tricks? But I really feel like I improve every day I come into the rink.”

Since last season, the skater feels that his skating and jump quality has improved significantly overall.

“I watch old videos of myself and I still can’t believe I managed to land some of those jumps,” said Rippon. “I’ve worked a lot with my team to become a smoother skater. I’ve always loved interpreting music, but sometimes I’ve been called out for having choppy skating. I work many hours trying to smooth my skating out so that it doesn’t disturb my performances.”

While there are no new elements planned for this upcoming season, Rippon would like to be able to have both the quad toe and quad Lutz in his free skate.

“I will pace it throughout the season, but by the end, that is my goal,” he said.

Rippon, who is currently scheduled to compete at the 2015 Orange County Open Championships in two weeks, is also pending an ISU Challenger Series (Senior B) event. Later this fall, he will compete at Skate Canada and Rostelecom Cup for his two Grand Prix events.

“This season, I want to pick up right where I left off last year,” he said. “I feel like I’ve started to gain a lot of momentum and I’m really coming into my own. I’m really excited to see where this journey can take me.”

When the skater isn’t training, he likes to go on runs at the beach and hike in the hills of California.

“I really love being outside and being active,” he said. “I’m spoiled now that I’ve been in California for the past three years. I don’t ever think I could live too far from the ocean now.”