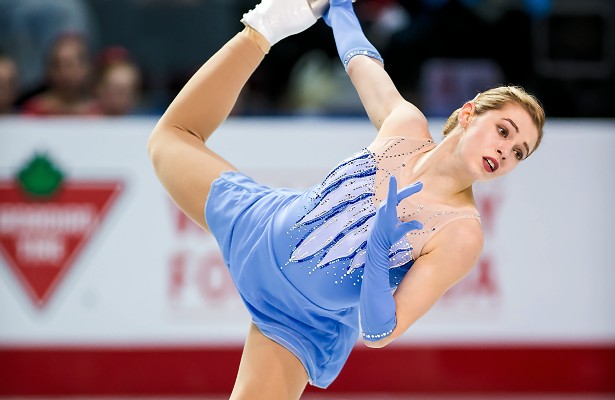 Last season, Canada’s Alaine Chartrand began her first full season as a senior on the international level at the 2014 U.S. International Figure Skating Classic where she finished fourth. She then followed up with a seventh and third place finish at Skate Canada and Rostelecom Cup, respectively.

“I felt great going into nationals,” said Chartrand, who was fifth the previous year. “I was practicing well and my recent bronze in Russia gave me a lot of confidence. I wanted to improve on what I had done in my Grand Prix events, and of course, to earn a spot on the World team.

At the 2015 Canadian Tire National Skating Championships, she placed third in the short program and first in the long, nearly missing the top of the podium by a mere 1.78 points.

“This year’s nationals for me was very special,” said Chartrand. “It felt amazing to gain my first World Championship berth in front of a home crowd. Last year’s nationals was very tough for me, and to come up from fifth place (then) to second this year felt great! I felt so confident and comfortable, which I think really helped my performances. Going forward, I need to find that level of comfort at all competitions.”

The 2014 Rostelecom Cup bronze medalist felt fairly confident going into the 2015 World Figure Skating Champions as she had earned a medal on the Grand Prix.

“I was also a bit nervous as I was chosen to represent Canada on the biggest stage and wanted to do well,” Chartrand confessed. “Of course I was also extremely excited for the whole experience.”

Her main goal for her Worlds debut in Shanghai, China, was to place in the top 12 in order to gain two berths for the Grand Prix for the 2015-16 season.

With the exception of an under-rotated triple toe on a triple Lutz-triple toe, the Canadian silver medalist otherwise showed a solid short program. While she struggled on most of her jumps in the long, she still achieved her goal with an 11th place finish overall.

“I was very pleased with my short program at Worlds, but I tightened up in the long,” noted Chartrand. “It’s just not having the same level of comfort (as a junior) in competition, but that comes with experience competing as a senior. Now I know more of what to expect.”

One major thing the 19-year-old learned from this past season is that she is competitive with some of the best in the world.

“I surprised myself by winning the short program at only my second Grand Prix ever and earned my first international medal at Rostelecom Cup,” said the teen from Prescott, Ont. “Even at the World Championships, finishing 11th without a good long was a confidence booster. Now I know that by cleaning up a few of my jumps, I have a better chance for competing for the podium at any event.”

Since Worlds, training has been going well for Chartrand, who is coached by Michelle Leigh and Brian Orser.

“I’m back to training all different triple-triple combinations and am working on the triple Axel,” she said, adding that she is focusing on consistency and quality.

“Alaine has been training more regularly with Brian and she is skating with more confidence,” added Leigh. “She has been working very hard on her jump consistency and it is our goal to continue to improve both the technical and program component scores. With the impressive spring training she has had, along with two new sophisticated programs, she is on track to achieve this.”

For this season, Chartrand plans to use the triple Lutz-triple toe for the both short and long program and a double Axel-loop-triple Salchow in the long. She is working the triple Axel into the long program, but under-rotated and fell on the jump at her events at the Lake Placid Summer Championships and the Minto Summer Skate.

“At Minto, I debuted my new short program and it went pretty well considering just how new it is,” she said. “I did an eight-triple long program for the first time. Not every jump was perfect, but I nailed all my combos and received lots of positive feedback on both programs. I feel that overall, things are going in the right direction and I just want to keep on that path moving forward.”

Shae-Lynn Bourne choreographed her new short program to “Lilies of the Valley” from the Pina soundtrack, while the long is a compilation from Gone With the Wind and was choreographed by David Wilson.

Later this fall, Chartrand will compete at an ISU Challenger series event (Senior B), followed by her Grand Prix events at Skate America and Rostelecom Cup.

“I’d like to be on the podium again this year at my Grand Prix events and improve on my 11th place finish at next year’s World Championships,” she said of her goals for the 2015-16 season.