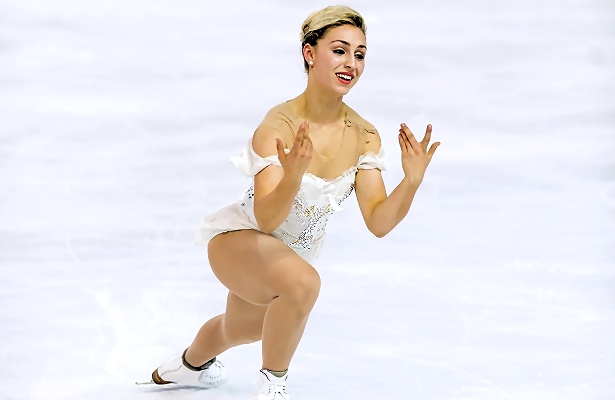 USA’s Courtney Hicks did fairly well in the first half of the season in her second full year on the 2014-15 Grand Prix circuit. The, skater, who finished second at the 2014 U.S. International Classic, placed fourth in both her events at Skate Canada and Trophée Éric Bompard before preparing for the 2015 U.S. National Figure Skating Championships.

“I felt really confident going into nationals,” recalled the 19-year-old. “My training had been going really well and I  just wanted to go out and allow all the work I’d put into the season to show. My mindset was all about just doing what I did every day in practice.”

“I was really happy with how I skated in the short program,” Hicks recalled. “My jumps were exactly how I would have liked them, and I’d say I gave the best performance that I’ve ever given.”

Despite the solid program, the skater, who earned the second highest total element score, felt that the scores didn’t quite reflect her performance.

“I was one of the few with clean jumps and correct edges,” Hicks noted. “Overall, though, I thoroughly enjoyed my time on the ice during my short program and I can’t complain about that.”

However, the long program was a different story. While the skater, who is coached by Jere Michael and Alex Chang, felt good and prepared going into it, the plan was derailed during the five-minute warm up.

“Almost immediately after the warm up started, I accidentally locked blades with another skater and my blade got a chunk taken out of it about a half inch long just back of the ball of the skate,” Hicks explained. “I didn’t notice it until after I had already skated.”

As a result, the teen from Chino Hills, Calif., was unable to gain the speed that she normally would and her jumps suffered as a result. She finished ninth in the long and eighth overall.

“The whole program was so much work, and it was a struggle form beginning to end, but you live and you learn,” she said. “Now I know to check my blades and boots before every program!”

After nationals, Hicks took a week off to relax before going back to light training and working on show programs.

“To relax actually meant that I went completely insane,” the skater laughed. “It’s so hard having all that free time when I’m not skating! I never realize how much of my time skating takes up until I take a break for a week. I’ve had about one show a month since nationals.”

Since then, Hicks feels that she has really grown as a performer. Along with her coaches, the skater selected music and programs that would really push her boundaries in directions she hasn’t gone before.

“I think that really forced me to stretch and push out my performance, because the programs weren’t just about showcasing my power and speed, they focused more on emotions and storytelling,” she explained. “Another big takeaway from last season is that I can hold my own and be competitive on the Grand Prix stage.”

For this season, Hicks is using “The Feeling Begins” by Peter Gabriel for the short program, and music from the Elizabeth: The Golden Age soundtrack for the long.

“Jonathan Cassar choreographed my short program, and I’m super excited to be working with Rohene Ward for my long!” she said. “I really feel that my performance and interpretation has improved since last season. Both my choreographers have really pushed me to work on this and take my skating even further than I thought I could.”

Overall, training this summer has been going well for the skater, who has been working on the triple Axel.

“It’s so nice to have a new jump to try to learn and work towards,” said Hicks. “It gives a fresh perspective on training. I’m planning on trying the triple Axel and getting it out there this season.”

The skater has also reworked her double Axel and is also working on a triple flip-half loop-triple Salchow.

“I really like this combo!” said Hicks, who also works with John Nicks. “It’s so much fun to do and it might end up in the program depending on how my coaches and I want to strategize my long.”

“I’m proud of the progress she has made training the programs with the attitude that she’s in front of an audience every time,” said coach Michael. “She’s really pushing that connection to the audience, even without an audience, that is needed to be a world medalist!”

The skater recently competed at Glacier Falls and plans on doing at least one ISU Challenger Series (Senior B) event before the Grand Prix season begins. She is currently scheduled to compete at Cup of China and NHK Trophy.

Over the summer, Hicks has traveled to Colorado Springs twice and plans to go back this month.

“I really love training there and seeing the gorgeous scenery,” she said.

When not training, the skater enjoys being outside, hiking, reading, and writing.

“I absolutely adore nature photography,” Hicks said, “and hiking is a great way to get into nature so I can take photos! I started getting into photography when I was about 11. It’s nice because it’s a good way to calm myself down and keep from getting nervous at competitions. It’s so quick, so I can take some photos and get my mind off things even if I only have fifteen minutes.”

One of her goals for this season is to skate with even more passion than she did last year.

“I also want to carry my early success on through the U.S. Championships, and hopefully beyond,” Hicks offered. “I also want to show growth throughout the season, and show that I have put a lot of work into the components side of skating.”