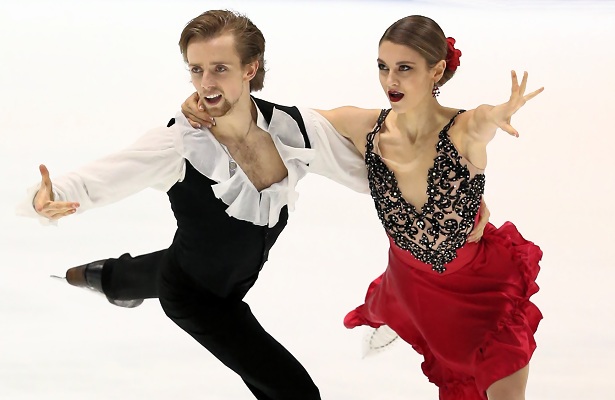 American ice dancers Kaitlin Hawayek and Jean-Luc Baker couldn’t be happier with their first run on the senior circuit last season. They fully embraced their transition from juniors to seniors and felt they made a great splash.

“We were thrilled with how we transformed into a senior team as well as the performances we put out on both the national and international level,” said Hawayek. “Of course we would have loved to have made the world team, but everything has a silver lining. For us, it gave us a huge head start to put into creating new material for this season.”

The 2014 World Junior champions get a great deal of support from their coaching team of Angelika Krylova, Pasquale Camerlengo, Natalia Annenko-Deller, Veronique Breen and Paul Bellantuono. One thing they learned from last season was how to harness one another’s energy and put all their focus into each other at competition.

“Being at the senior level brings bigger and more intimidating circumstances, and it can be easy to get wrapped up in the hype of competing in the ‘big leagues,'” said Hawayek. “Learning to give 100 percent of our time and effort to each other and only worrying about what was in our control was huge in making the transition as a senior team.”

The 2013 Junior Grand Prix Final silver medalists got their feet wet at 2014 Nebelhorn Trophy where they finished fourth, and then followed up with a sixth and third place finish at 2014 Rostelecom Cup and 2014 NHK Trophy.

“I think the biggest lesson we learned from last season was learning how to pace ourselves,” said Baker. “It was difficult coming back from Cup of Russia (Rostelecom Cup) to go to NHK. The turn-around felt a lot shorter then it was, and we had to learn to adapt very quickly. Based on our results, it shows that we did a decent job of it.”

“It might sound cheesy, but I’d say we learned that we compete best when we focus on the reason we began to skate in the first place,” Hawayek added. “Which is the fact that we have an unconditional love for the sport of figure skating. When you start to look at that, rather than worrying about how the results pan out, it reduces the pressure immensely.”

“Jean-Luc and I are still such a new team compared to many teams we have competed against, but when you enjoy skating with someone as much as we enjoy skating with each other, it feels like we’ve been partners for years!” added the 18-year-old.

After the Grand Prixs, the 2014 U.S. national junior champions debuted on the senior level at the 2015 Prudential U.S. Figure Skating Championships where they placed fourth with only 1.48 points away from the third spot on the podium. The team then competed at the 2015 Four Continents Championships (4CCs) where they finished in a respectable fifth place.

However, there was no break for the ice dancers after the 4CCs as they immediately returned to their home rink to begin working on their new programs for the 2015-16 season.

“We both took a week off in June for vacation with family and close friends and did a few shows on weekends,” said Hawayek. “Other than that, we’ve been at our rink at the Detroit Skating Club working on new programs and new elements. We’re both ‘case-A workaholics’ and have been putting lots of time and effort into gearing up for this season. So far, we are extremely excited about the material we have created, and training has been going fantastic! We can’t wait for everyone to see what we’ve been working on!”

Since last season, the 2014 NHK Trophy bronze medalists have been working on all aspects of their skating, with emphasis on their speed and flow, as well as their connections and emotions with each other on the story lines.

“We hope that the audience and the judges will get as invested into our programs as we have,” said Hawayek. “We’ve also been focusing on the key points for the Ravensburger this year. Nowadays, getting the levels in the pattern dance of the short dance is so important!”

“We also worked a lot in our off-season trying to prepare new lifts,” Baker added. “We spent a lot of time with acrobats, as well as working off-ice, trying to get different and unique lift ideas for this season.”

Most of their elements this season are new as the emerging team wants to reinvent themselves and push their boundaries.

“There is no point in playing it safe if you are going to produce the same skating year after year,” noted Hawayek. “We want to show everyone that we are growing as a team and looking for new and exciting things.”

Both ice dancers agree that this season’s short dance, set to selections from The Nutracker, will be the hardest one they’ve done to date.

“We really pushed ourselves physically this year in the short dance,” said 21-year-old Baker, “from both an athletic approach and aesthetic stand point. Angelika (Krylova), Kaitlin and I choreographed it. Angelika did the ground work for it, but we all feel it’s a group effort and have a great rapport with our coaches.”

The free dance, which will be to music from The Theory of Everything soundtrack, is an in depth concept for both Hawayek and Baker in terms of a story line.

“We are portraying the aspects of falling in love with one another and then throughout the program, I begin to develop the struggles one has dealing with Amyotrophic Lateral Sclerosis (ALS),” Baker explained. “Not just the patient’s problems, but the emotional standpoint of Kaitlin as she helps me through the issues. We are very proud of the product Pasquale (Camerlengo) has created for the two of us and how we all worked together to create it.”

When not training, Hawayek enjoys anything artistic such as painting, drawing, dancing, and playing the piano.

“I also just bought a bike and have enjoyed riding around some of the more pedestrian areas that are close to where I live and train,” she said. “I am constantly on the lookout for a new café or coffee shop where I love to go get a coffee, find a quiet corner and read a book. It’s a great way to relax on weekends after a long week of training!”

Baker likes hanging out with his friends, playing video games, going to the movies, hiking, water sports, and trying out new places to eat.

“I love all kinds of food except seafood,” he shared. “I love to try most anything and I go all around Detroit for little nooks and crannies for food. I also like grilling on the BBQ so I can eat more food!”

The team is currently at U.S. Champs Camp for early feedback and opinions from the officials on their material for this season. They will then be assigned to an ISU Challenger series event (Senior B) before they compete at their two upcoming Grand Prix events: Skate America and Cup of China.

“We are thrilled about two new events and two places we have yet to perform in!” said Hawayek. “We’re especially excited for our first Skate America in front of a home crowd!”

Their main goal for this season is to continue to improve their performances from competition to competition, and work towards consistent levels at those competitions.

“We are both definitely looking to make the world team this year and think we have the full potential to achieve that goal,” Hawayek summed up.