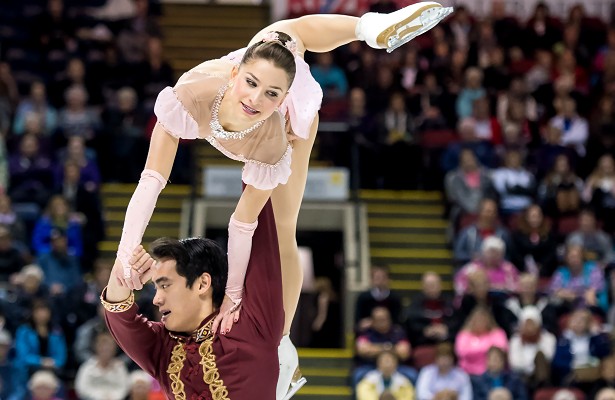 USA’s Madeline Aaron and Max Settlage had a great senior debut this past year, and are ready to challenge for the 2015-16 season.

Last season, the 2014 U.S. national junior champions placed third and sixth in their ISU Challenger Series (Senior B events) in Salt Lake City, Utah, and Oberstdorf, Germany. In their Grand Prix debut, they followed up with a respectable fifth place finish at Skate America and fourth at Skate Canada.

“We did even better than we had hoped, and we trained harder than we ever had!” said Aaron. “We were very pleased to have had four international assignments, and felt that by the time we completed both Grand Prix assignments, we had improved our overall performance. It was a thrill to go to Skate America, and we were excited to finish fourth at Skate Canada.”

A few months later, the team finished fourth at the 2015 Prudential U.S. Figure Skating Championships in their debut on the domestic senior level.

“Our goal last season was to gain experience by going to as many internationals as we could,” said Settlage. “We wanted to begin to make our mark, and we think we accomplished that goal. There is nothing that compares to stepping out on the ice to skate with senior competitors whom we have watched in the past few seasons. We were also thrilled to be on the podium at nationals in our first senior season.”

One thing the team took from last season was that having an artistic presence on the ice is just as important as completing the elements.

“We tried to interpret the characters in every part of the program and to enjoy the performance while trying to draw our audience into the story,” Aaron explained.

“When Julie Marcotte creates our programs, she always talks about the story with us and makes us understand how to interpret her vision,” added Settlage. “From the start, we knew what we wanted to accomplish with ‘Coppelia,’ but ‘The King and I’ took a little longer. We watched the film, listened to all the music, and tried to channel the characters, which both had strong personalities. It was one of our best programs by the end of the season.”

The team from Colorado Springs, Colo., who has been together for five years, is coached by Dalilah Sappenfield, Larry Ibarra, Eddie Shipstad, Tom Zakrjasek, Janet Champion, and Ryan Jahnke.

Soon after nationals, Aaron, 20, and Settlage, 23, traveled to Montreal to work with Marcotte on their new short program. They then performed in several shows during the spring where they debuted a new show program.

“We began working on our elements in March, and by April, we were training more consistently,” said Aaron.

“Soon after we returned from Montreal for our long program choreography, we began running short programs and doing sections of our long,” Settlage shared. “As Champs Camp approaches, we are now running full programs to prepare for the season, and training has gone well.”

In the five seasons that the skaters have been competing together, they have worked hard to find their “rhythm” in training.

“Each year has been a little different, but last year we settled into the training patterns that work best for us,” said Aaron. “These patterns vary by the week, and during the week before competition, we have learned to prepare so we feel confident on the ice.”

Settlage agreed. “I think we have learned to compete well. Going to Skate America and Skate Canada last year provided us the best education we could have had. We learned to do two major competitions back-to-back, and then return home, get back to work, and prepare for nationals. The season strengthened our commitment to each other and to the sport.”

Currently the skaters are focusing on skating skills with added lessons from Ryan Jahnke, who drills them in their stroking.

“He also works on our turns and footwork to make sure they are clean,” said Aaron. “We want to have good basic skating skills to be the foundation of our programs.”

“We are also working on having a more commanding presence on the ice,” Settlage divulged. “Both of the programs that Julie created for us have made us stretch to interpret different kinds of music. When we were Novice, our ‘Nutcracker’ program was just right for a beginning team, but now we are trying to look towards more mature pieces of music that demand a more refined interpretation and stronger demeanor on the ice.”

This upcoming season, the 2015 U.S. national pewter medalists will be performing to Edith Piaf’s “Hymne à l’amour” for their short program.

“Julie gave this program to us and asked us to perform it with the intensity of experience,” offered Settlage. “It is a real challenge for us. For someone who has experienced a lot of heartache and loss, the emotions are always there, and the feelings are quite strong. We must learn to understand what it is to lose someone and to feel the unrelenting pain of that separation. This is a program that we hope will grow stronger with each performance.”

“Piaf wrote the song about the love of her life who was killed in an airplane accident,” explained Aaron. “The song is an expression of her anguish; she sings of how strong her love is, even if it demands every sacrifice. She knows they will be reunited for eternity when she herself dies.”

For their long program, Marcotte wanted something different than the “The King and I,” and choreographed their new routine to selections from Puccini’s La Bohème.

“We both enjoyed the energy of last year’s music, but it was time for us to stretch ourselves to perform many kinds of stories and music,” admitted Aaron. “We have always been comfortable with ballets, but now we are taking on a very serious and tragic piece.”

“The story of La Bohème is about a man and a woman, a poet and a seamstress, who are struggling and barely existing. They meet one evening in his garret. Their candles go out, and in the dark they touch hands, falling in love at once. However, she is gravely ill, and he eventually parts from her, hoping she will find someone who can help her pay for medical help. They finally reunite briefly, remembering their happy first meeting, but she dies and he is grief stricken. It is very emotional music.”

“Hugo Chouinard, who creates our music, has given us a wonderful cut that contrasts gentle, soft scenes with darker, more foreboding ones,” he added. “The programs ends with a strong, familiar piece from the opera.”

The 2014 U.S. International Classic bronze medalists are currently working on new elements and different lifts, as well as perfecting their transitions in their new routines.

“Julie always challenges us to try new things that make her programs so special, but it takes time for everything to flow well,” said Aaron. “What seemed difficult at first when we were learning the program later makes sense as we skate it over and over.”

Aaron and Settlage recently competed at the Broadmoor Open and are now preparing to participate at Champs Camp in Colorado Springs, Colo., this week. While they are thrilled to have been selected to compete at Cup of China later this fall, they are keeping their fingers crossed for more international assignments.

When there is spare time, Aaron takes courses in nutrition and developmental psychology at the University of Colorado-Colorado Springs, while Settlage has partnered with US Figure Skating on some assignments such as his work on #SummerwithTeamUSA and media for the Broadmoor World Arena Ice Hall skating program.

Their ultimate goal for this upcoming season is to make the Four Continents and World team.

“We also want to make our mark internationally by improving our scores and performing well on the Grand Prix circuit,” Settlage summed up.