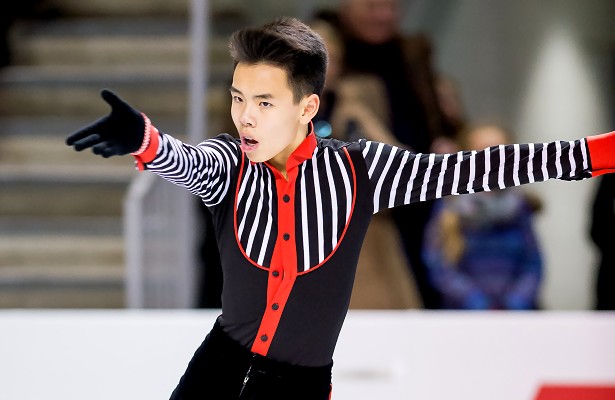 Canada’s Nam Nguyen, who will be competing in his second year as a senior, is working even harder to show that his skating overall has matured. Don’t be fooled by the infectious smile and charm; he’s ready to get serious.

“I’m focusing on showing more emotion and making my skating much faster than last season,” he said. “The new choreography is about power and intensity, so everything will be bigger this year.”

Nguyen, who placed fifth the previous year at nationals, was not nervous going into the 2015 Canadian Tire National Skating Championships as he felt well-trained.

“I knew that if I stayed relax and trusted myself, then I would be fine for the competition,” recalled the Skate Canada Autumn Classic silver medalist. “My expectations were just to skate well and show everyone that I will be something big in the future. I want to show everyone my best skate. I didn’t think about the results at all because I knew that it would mess up my mindset throughout the week.”

When the former World Junior champion took the ice for the short program, however, it was evident that he was a bit tentative as it showed in the shaky landing of his opening triple Axel.

“I thought to myself that I cannot continue this by holding back,” he said. “I needed to be stronger and spicier with the rest of the program, and that’s what I did.”

The skater, who is coached by Brian Orser, Ernest Pryhitka, and Tracy Wilson, earned a new personal best (81.78) for his short program and stood in first place going into the free skate. However, he was not so happy about having to skate last going into the long program.

“Usually I would freak out about skating last, but I felt totally comfortable and happy with it because Brian and Ernest made me feel good,” the 17-year-old remembered. “I totally forgot about the negative aspects of skating last.”

“Going into my first jump, the quad Salchow, I felt very good because the speed going into it was perfect and the take-off felt amazing,” the 2014 Skate America bronze medalist continued. “As I landed the jump, I knew that the rest of the program was going to be well and so I just trusted my training to come in and that’s exactly what I did.”

“The atmosphere in the event was amazing!” Nguyen recalled. “It helped me feel confident because I like to perform for the audience, and when I hear them cheer for me, it just motivates me more to my best for them.”

Going into the 2015 World Figure Skating Championships, Nguyen stayed focused, and his intent was to not only repeat, but show even better performances than he did at nationals. He finished ninth in the short, fourth in the long, and fifth overall in his second appearance at this event.

“I was very happy and proud with the work that I put in this past season and I want to keep improving more for this next one,” said the skater, who finished 12th at Worlds the previous year.

Since then, training has been going well for Canadian champion, who has been paying more attention to the little details of his skating.

“I’m also continuing to improve the speed and power in everything that I do (skating, jumps and spins) and I am working on getting both of my quads (Salchow and toe) to be more consistent in my programs.”

This season, Nguyen will adding a quad toe to both programs. The quad toe and quad Salchow will be the first two jumps in his new long program. The short program is to music from The Killing Fields soundtrack and was choreographed by David Wilson.

“This program is more of a dramatic and bigger side of my skating,” explained the teen who trains in Toronto, Ont. It’s supposed to show a different side of me from previous years because I’ve been skating to music that was supposed to make me look cute and fun. Now I want to show that there’s a serious side to me and that my skating is much bigger than before.”

Jeff Buttle choreographed his new long program, which is set to Bach’s Passacaglia and Fugue in C Minor.

“The idea of big skating and higher maturity level is similar to the short program,” Nguyen offered. “It is a classical piece, which means that everything that I do must be strong in terms of intensity level. It is a challenging piece to skate to, but I like taking challenges.”

Nguyen, who recently competed at 2015 Thornhill Summer Skate, is planning on competing in an ISU Challenger event, followed by his two Grand Prix events at Skate Canada and Rostelecom Cup later this fall.

The skater, who will be a senior this year, enjoys hanging out with his friends and penny boarding when he has time.

“I want to make it to the Grand Prix Final,” he said, when asked about his goals. “I also want to have the same expectations as last year, which weren’t too stressful for me. Going into each competition, I want to have a mindset of doing the best that I can and performing for the audience and judges.”