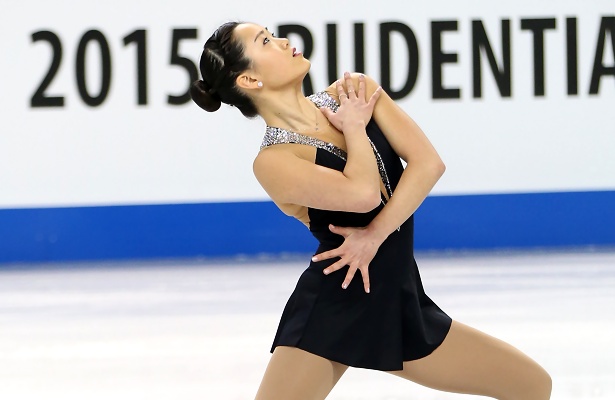 USA’s Angela Wang, who has won three medals on the Junior Grand Prix circuit, had a good start in her senior international debut this past season. The 19-year-old medaled at both of her ISU Challenger Series events, and then competed in her first Grand Prix event at Rostelecom Cup where she finished ninth.

Training had been going extremely well for the 2014 Skate Canada Autumn Classic silver medalist, however, a week before she left for the 2015 Prudential U.S. Figure Skating Championships, she herniated a disc in her back. It was unfortunate timing and the skater was in excruciating pain for several days leading up to the event where she finished in 15th place overall.

“I really wish I could say the injury didn’t have an impact on my performances, but it certainly did,” said Wang, who trains in Colorado Springs, Colo., under Christy Krall and Damon Allen.

After nationals, the skater took three weeks off to recover, and when she was able to move better, began therapy.

“I started taking it very slowly on the ice for a few weeks,” said Wang. “I also switched to a different brand of boots and blades, so that was a struggle.”

While the herniated disc is not “fixed” per se, the injury has since improved immensely through lots of physical therapy and bodywork. Since last season, the 2014 Lombardia Trophy bronze medalist has been listening more to her body and is focusing on staying healthy.

“As I get older, it’s important to know how and when to push myself,” noted Wang. “I’m definitely working harder and smarter than I ever have before, and have also become more organized in general.”

This season, the 2009 U.S. novice bronze medalist will be including a “Rippon” loop in both of her programs.

“It’s so fun to do!” she said with excitement. “I honestly had no idea I could do it. Christy originally had me do some doubles with my arms overheard for fun and to switch things up a bit. Then one day she challenged me to go for a triple that way. I must’ve looked at her like she had two heads! Eventually, I decided to go for it and miraculously it worked!”

This season, Wang is keeping her short program from last year—”Paint it Black” by Angèle Dubeau & La Pietà—which was choreographed by Rachael Flatt. The skater will be using the triple loop for her solo jump and a triple toe-triple toe for the combination.

“It’s honestly one of my favorite programs that I’ve ever had and felt that I wasn’t able to perform it to the best of my ability last season,” she explained. “Rachael and I tweaked the program a little, but the layout is similar to what I had last year. Once the triple Lutz-triple toe is more consistent, we will add that back.”

“When I first heard this piece, I saw myself skating to it and knew I had to use it,” said Wang. “While it takes me out of my comfort zone, I love the program and had a blast working with Mark on it.”

Wang has already competed in several summer competitions in Vail, Colo., Sun Valley, Idaho, and Pittsburgh, Penn. She will be competing in two weeks at the 2015 U.S. International Figure Skating Classic, and will also competed at Trophée Éric Bompard for her Grand Prix event later this fall.

“I definitely want to get back to the same level of training and confidence that I was at going into the U.S. Championships earlier on this season,” she said of her goals. “Of course, I want to do well at my Grand Prix and any other international assignments this fall.”

When not training, Wang is takes college courses at University of Colorado Colorado Springs and also works the front desk at a Pilates studio.

“Earlier this year, I also took the Barre certification course the Pilates studio offered and became a certified instructor,” she revealed. “I am now teaching classes at the Country Club of Colorado. I also spend a few hours a week assisting my personal trainer with some of the groups he trains.”

In her spare time, the skater enjoys a good hike or walk outside.

“I also like to annoy my dog, Rolo (a Yorkie-Schnauzer mix), by holding him and blowing into his face to see how long it takes for him to escape my clutches,” she added with a mischievous laugh.