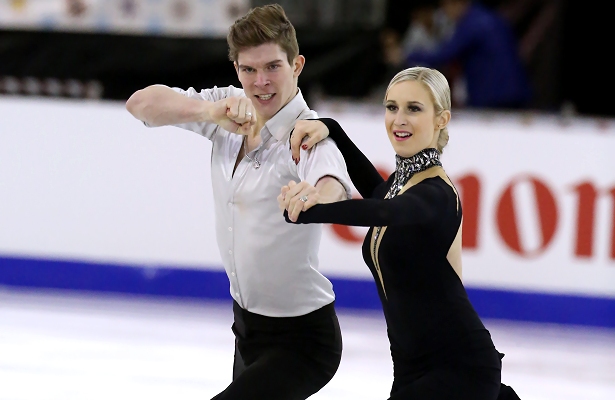 Anna Yanovskaya and Sergey Mozgov of Russia perform their Free Dance at the 2014-15 Junior Grand Prix Final of Figure Skating in Barcelona, Spain.

Russian ice dancers Anna Yanovskaya and Sergey Mozgov dominated the junior circuit last season and crowned their junior career with the junior world title in Tallinn, Estonia, last March. They had been edged out of the gold the year before by USA’s Kaitlin Hawayek and Jean-Luc Baker, but this time they made sure that nothing and nobody took it away from them.

“We tried to improve technically,” said Mozgov. “We were counting on maturity so that we could show a deeper relationship in our programs. We wanted to maximally bring across the idea of the program and the emotions so that the spectators and judges felt and understood what we were skating. Not everybody can do that and we wanted to achieve this.”

Indeed, the couple stood out among the junior teams during the past two years. Part of the reason is that they are both very tall, have beautiful long lines, and look more grown up than most of their competitors.

Although still junior eligible this season at age 18 and 20, the Muscovites decided to move up to the senior level and are busy preparing for their first events—the test skates in Sotchi in mid-September and a Russian Cup series.

“At the same time, we continued taking off-ice dance classes,” Yanovskaya shared. “We studied different styles of dance ranging from folk dances and classical dances to styles that are popular in Europe right now such as house, krump and wacking.”

Interestingly enough, Mozgov finished his studies at the sports institute this spring while still being a junior.

The Russian word ‘mozg’ translates as ‘brain,’ and so his partner added that “his last name is not in vain.”

Indeed, education is very important to him.

“You always need to have education,” Mozgov pointed out. “This is always appreciated, whether you are an athlete or not, and I won’t skate until old age. There has to be something that I can do later. Therefore, I am paying attention to studying. I try to succeed.”

During the past season, he had to work on his diploma thesis and sometimes was writing until two or three in the morning. Now that he has finished his first studies at the sports institute, the ice dancer is thinking about studying something else.

“I want to have a second education, but so far I don’t know which one,” said Mozgov. “Maybe it will be orientated towards sports management or medicine.”

Meanwhile, Yanovskaya just finished school and started her studies at the institute of physiculture which will take her five years to complete. However, she would like to pursue an entirely different career.

“In general I wanted to go and work with the police,” she revealed. “It has always been my dream to be a pathologist, but for this, you need to study medicine for a long time and this is hard to combine with skating. However, it would be my dream to work in the police to solve criminal cases.”

The new season for the ice dancers began on June 2 with a four-week training camp in Liepaja, Latvia, before they returned to their rink in Medvedkovo, Russia, where they began working on the choreography on their new dances.

The music for the short dance, which they chose themselves, is to “My Sweet and Tender Beast” by Evgeni Doga. Their free dance to music from “The Great Gatsby” was a team decision. Both their coach, Elena Kustarova, and choreographer, Liudmila Vlasova, choreographed the programs.

“For the free dance, we took inspiration from watching the modern ballet The Great Gatsby by the famous American choreographer Dwight Roden,” Yanovskaya explained. “We tried to realize our own vision using elements of modern choreography. Our theme is love in each form. To say it with one word, it is about this kind of love that rules fate and is above human reasoning. We are very pleased with our programs and we feel very comfortable with them.”

The ice dancers get along very well and like to spend their spare time together.

“We like to go to the theatre, ballet and shows,” Mozgov offered. “For example we went to the premiere of the ballet Legend of Love in the Bolshoi Theatre. It was a great performance!”

“We go to the theatre almost every day off,” added Yanovskaya, “so on Sunday we are going to comedies or dramas just for distraction. We can’t only focus on skating as we are at the rink the whole week and don’t see anything else to develop ourselves.”

Mozgov agreed: “This allows us to switch our minds and rest mentally. You can’t only live in the sport.”

The Russian junior champions will debut their international season on the senior level at their first two Grand Prix events—Skate America and Trophée Éric Bompard—later this fall.

“We have absolutely new, quality challenges this year,” acknowledged Yanovskaya. “We have prepared senior programs that besides physical preparation, demand perfect execution of technical elements. Our (international senior) debut will be at Skate America where we will compete with well-known dance teams. Our job will be to bring across to the audience and judges our interesting programs and to represent our country well.”