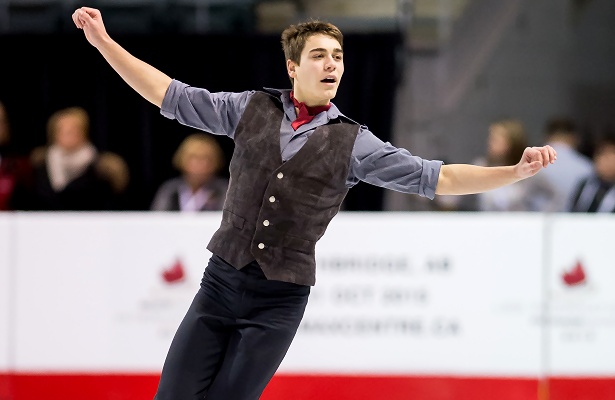 After three years of competing on the junior level, Canada’s Nicolas Nadeau is now being pushed out of the nest into the senior level – at least on the national level.

“Even if I wasn’t forced to move on, I would anyway because I’m ready for it,” said the 17-year-old. “My skating skills and jumps has evolved, so I think I’ll be ready for the challenge.”

Last season, Nadeau placed fifth and 10th at his Junior Grand Prix (JGP) assignments in Japan and Croatia. Soon after, he finished second in the men’s junior category at 2015 Skate Canada Challenge. It was then that Nadeau and coach Yvan Desjardins decided to add a second triple Axel to his long program in order to up his game for nationals.

“I was totally going there for first place,” he said, regarding the national junior title. “It was the real reason why I didn’t move to seniors that year. I missed my chance last year as I didn’t do well in the long and finished in fourth place.”

At the 2015 Canadian Tire National Championships, Nadeau placed first in both the short and long program to win the junior title with nearly nine points to spare.

“I was really happy,” he recalled. “It was the goal I was expecting and I achieved it. I did the job I needed to do and it paid off.”

Going into 2015 Junior World Figure Skating Championships, Nadeau’s aim was to demonstrate what he could do in front of the judges and see where he stacked amongst his competitors. In the short program, he opened with a spectacular triple Axel, but then doubled a triple Lutz.

“To be honest, my triple Axel was so high that I had more speed than usual for the preparation of the triple Lutz, so I wasn’t on the music,” he explained. “My timing wasn’t good and I forced it too much.”

The skater nearly missed the next spin and then doubled the back end of a triple toe-triple toe.

“At that point I was tense and all over the ice,” Nadeau recalled. “I almost fell three times in the foot work.”

As a result, he placed 25th and did not qualify for the long program.

“It was a good experience to skate at such an important competition,” said the Canadian Junior champion. “I learned that I need to try to rotate every single jump and never give up!”

“The training club at École Excellence Rosemère is like one big family,” said Nadeau. “Everyone helps the skaters to reach their goals.”

This summer, the skater has been focusing on his spins and the overall quality of his skating.

“I worked on the speed of the spins and also a bit on my flexibility so I can do better positions,” Nadeau offered. “We also worked on the quality of skating so I can be more ‘edgy’ on the ice and feel and look more relaxed as I tend to be high in the shoulders.”

“I really, really like this new short program!” said Nadeau, who will turn 18 later this month. “It’s very entertaining and I hope I’ll perform it well. The music is really entertaining and it’s easy for me to enter in that character. It’s fun and each hint of the music is used really well and has it’s own move. There is no plain moment and Shae-Lynn always found the right move to place in each sequence and fit it with the music and my own style.”

The teen from Boisbriand, Que., who will start his second year at Collège d’enseignement général et professionnel (CÉGEP) this August, recently picked up road biking in order to improve his cardio.

“My parents and I decided to sell my scooter to buy a bike,” said Nadeau. “Since I have my driver’s licence, I just take the car if it’s too far for the bike. “The bike is a little faster in the city than the scooter was because we have a side road with less stop signs. I use it five days a week when the temperature permits between my home and the arena.”

His coach appreciates that the skater gets in his warm up and cool down with the bike, while his parents welcome the gas that is saved.

“It was my idea to be more consistent traveling to the arena with bike for the cardio,” said Nadeau. “I used to do it sometimes when I was younger, but only few day in summer. I decided to make it a regular way of transportation this year.”

“I was pretty pleased with the score of 203 points, my first 200 mark reach, at Skate Detroit,” he said. “Most of all is that it can still improve. Now that my score goal for this year has already been reached, I will have to make a better one!”

The skater also recently competed at his first JGP event of the season in Riga, Latvia, where he finished fifth. He will compete again early next month in Zagreb, Croatia.

“We are very pleased with the program component marks he received in Latvia,” said coach Desjardins. “We have worked hard since last season to improve them and it showed. For the next several weeks, he will be working hard on the consistency of his quad toe for the long program (for senior competitions) while still improving the overall quality of both his routines.”

Nadeau’s goals for this season are to make the top five in his senior debut at nationals and try to earn a spot on the Junior World team.

“It will be hard to qualify for Junior Worlds as there is only one entry for Canada, but I am certainly going to try!” he said.