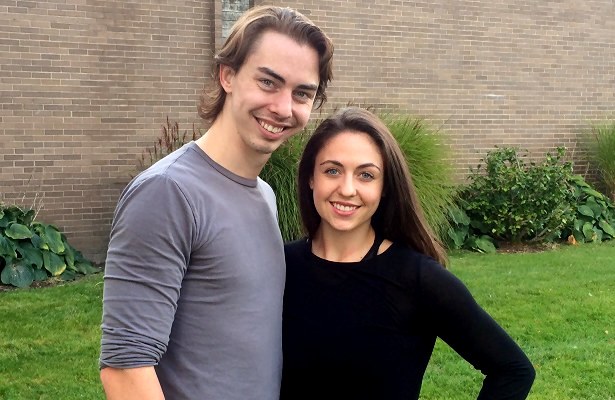 USA’s Alexandra Aldridge and Matthew Blackmer, who teamed up less than six months ago, were recently added to the International Selection Pool by United States Figure Skating.

In May 2015, ice dancer Alexandra Aldridge teamed up with pair skater Matthew Blackmer to represent the U.S. in ice dance. Sound a little like the 1992 movie The Cutting Edge where a pair skater partners up with a hockey skater? You bet! However, Aldridge and Blackmer’s partnership wasn’t one founded out of desperation.

“We feel our situation is exactly like the movie!” Aldridge laughed. “However, unlike the movie, Matthew and I have gotten along from the very beginning. When we started skating together, all that consumed me was that he made me realize why I love to skate and showed me how to love the sport again.”

“To be honest, I haven’t given much thought to the fact we are only two years from the next Olympics,” said the 21-year-old. “We both obviously want to have success in this sport, but the only thing we have control over is how hard we work, and I can tell you we make every training day count!”

As for Blackmer, the transition hasn’t been easy; however, not only is he coping with the many changes, he’s also embracing them.

“Ice dancing is hard! Let me start with that first and foremost,” said the 23-year-old who was born in Findlay, Ohio. “The general changes, such as knee and ankle bends, have been the first challenges to incorporate into my very basic foundation. From there, our coaching team has really helped me on a daily basis on areas like carriage and posture. But man, those toes are tough to point all the time!”

The team began training at the Detroit Skating Club in Bloomfield Hills, Mich., under Angelika Krylova, Pasquale Camerlengo, and Natalia Annenko-Deller after Blackmer relocated from Colorado Springs, Colo. Since then, they have competed at the 2015 Lake Placid Ice Dance Championships where they placed third in the senior category.

One might think that with Aldridge’s prior credentials that this new partnership would take a great deal of patience and tolerance on her side, not to mention a good sense of humor.

“There is a lot of work to be done, not just because we are a new team, but also because it’s Matt’s first time ice dancing,” Aldridge admitted. “So it’s important that we keep things in perspective. We both have to keep reminding ourselves at how far we have come in such a short amount of time.”

“There are definitely times where we have had a good laugh at what we are trying to do,” she continued. “Having an ice dancer and pair skater team up is very uncommon but also new and exciting. All I can say is that every morning I look forward to going into the rink to skate with Matthew.”

“Alex and I have such a connection on and off the ice,” Blackmer added. “One of the reasons I have such faith in our partnership is because we have such a strong commitment to each other. But yeah, I’ve definitely learned to laugh at myself and enjoy how frustrating a choctaw (a turn that involves both a change of foot and a change of edge and lobe) can be!”

While Blackmer may miss pair skating, he’s been able to supplement that void by coaching some of the younger pair teams at the rink.

“I’m definitely getting the same fulfillment, if not more with Alex,” he said. “It’s so rewarding to step on the ice with someone that has the same drive and desire as me. We both want it and that’s fulfilling in itself.”

While Blackmer isn’t exactly a novice, he is indeed learning a new discipline. In fact, he had to pass sixteen dance tests in one day in order to compete with Aldridge.

“Some days I completely forget that Matthew use to be a pair skater,” said Aldridge. “There is something very special about Matthew and his natural skating ability.”

Nonetheless, the coaches weren’t completely sold at first. At least not until they saw the skaters perform together.

“Right after the first day, Angelika said to both of us, ‘Of course you guys will skate together,'” recalled Aldridge. “She saw potential. We both know there was a lot of work to be done to be at a competitive level, but the rate of our improvement is very good. We have to spend so much time on the basics, as well as our programs, so it takes a lot of work and time on the ice. But Matthew is the most positive person I know and makes working hard an easy task to accomplish every day.”

Naturally, the easiest elements for the two skaters are the lifts, which developed quickly.

“Dance lifts require more precision and agility,” Blackmer explained, “but they don’t demand the same explosive power as a pair lift. Our chemistry itself came naturally, as well. We’re both at similar points in our lives and can really relate to one another. Our dynamic is so pure and unadulterated. We really feel like, as kids that have grown up together, we can showcase our deep connection with each other.”

While all the elements are difficult, Blackmer says, “the twizzles are tough, but we’re working very hard.”

This season, the team is using Khachaturian’s “Masquerade Waltz” and Strauss’ “Radetzky March” for the short dance.

“I’ve loved ‘Masquerade Waltz’ for years,” said Blackmer. “I spend quite a bit of time watching Angelika’s own rendition of it. It was such an exhilarating performance and definitely something to aspire towards.”

“Angelika’s program to ‘Masquerade Waltz’ is our motivation for everything in this program,” Aldridge added. “We really enjoy the style of our short dance and the elegance of it.”

Their free dance is a tango performed to Piazzolla’s “Oblivion” and Lippa’s “Tango de Amor.”

“By skating to a tango, we really wanted to capitalize on our ability to envelop ourselves in each other,” Blackmer explained. “We have such an intensity when we look into each other’s eyes, and we thought there was no better way than to go with a tango. It’s such a sensual and intimate program, and we thought it would be a great vehicle for our first year together.”

“For me specifically, this is the first time I get to show this new side of my skating,” Aldridge added. “Having Matthew being the leading man in the program brings something out in me that makes our connection special.”

As a new team in a very rich and competitive field, it’s difficult for them to set material goals—especially given how unprecedented their specific circumstances are.

“This season, we feel our goals are mainly about showing improvement from competition to competition, as well as overall improvement in our look and ability as a new team,” Aldridge offered.

“I think for me, my goal has been to learn and soak up as much knowledge as possible this first year together,” Blackmer added. “We really put our nose to the grindstone every day and clock as many hours at the rink as we can. You really don’t feel all those minutes go by though when you’re skating with your best friend.”

The new team was recently added to the 2015-16 International Selection Pool (ISP) by United Skates Figure Skating (USFS) to be considered for future international assignments.