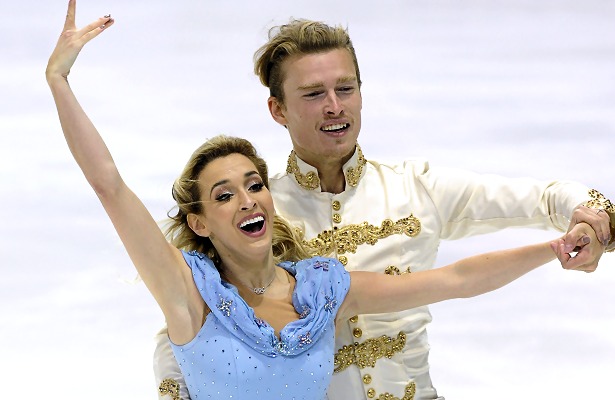 Ice dancers Isabella Tobias and Ilia Tkachenko, who teamed up last summer, hope to represent Israel for the upcoming 2018 Olympics.

Sometimes when you get a second chance, you grab it by the horns and don’t let go. This is exactly what Isabella Tobias and Ilia Tkachenko, who now represent Israel, are doing. Although the ice dancers skated together briefly several years ago, Tkachenko decided to return to Russia to skate with Ekaterina Riazanova in 2009. Meanwhile, Tobias teamed up with Deividas Stagniunas and represented Lithuania until 2014.

Following the 2013-14 season, Riazanova and Tkachenko announced they were parting ways when they didn’t qualify for the Olympic Winter Games. At approximately the same time, Stagniunas announced his retirement from competitive skating due to recurring injuries.

While Tkachenko wanted to retire and was considering his options, Tobias decided to look for a new partner and immediately thought of him.

“I knew if I was going to continuing skating, I wanted it to be with somebody I really felt it would go to a different level with,” she explained. “Somebody really amazing.”

Tobias expressed her interest in skating with Tkachenko during a meeting with coach Igor Shpilband.

“I told Igor that I had always wanted to skate with Ilia,” she recalled. “I always thought he was just so talented and never got the scores that he deserved. So we called him.”

Tkachenko agreed to give it a try and then moved with his wife of three years, Ksenia, to the Detroit area.

“We didn’t have these awkward moments in the beginning when you get used to a new partner,” he said. “Igor was impressed with how fast we did everything and how we got the material. It worked well from the beginning.”

Since the new team decided to represent Israel, they had to sit out the 2014-15 season to become eligible.

“I am Jewish and I had a very strong connection to Israel my entire life,” Tobias explained. “I started following Israeli politics intensely when I was in the sixth grade. There aren’t many Jewish people and Israel is under attack quite a bit, so it needs all the support it can get. We’re both very honored to represent the only true democracy in the Middle East.”

The team used their time well and came out ready this season. They were off to a good start when they won the 2015 Lake Placid Ice Dance competition earlier this summer. They went on to take silver medals at the prestigious Finlandia Trophy and the new Challenger series event Mordovian Ornament in Russia in October.

“We were once again very happy to build on our season’s best scores and get some amazing feedback,” said Tobias regarding the latter event held in Saransk. “We look forward to improving even more as the season progresses.”

At 24 and 28 years of age, both skaters have been around for a while and have competed at the World level. As such, they feel that their experience is a definitive advantage for them.

“I think we both have a good perspective on skating now,” Tobias offered. “We both don’t really get as nervous as we used to. We’re more confident. We’re used to this by now.”

Tobias feels that one of the keys to their success is the fact that they focus on themselves.

“Not in a selfish way,” she explained. “Just that we don’t look left, we don’t look right, we don’t think about what other people are doing. We’re really just trying to do our job and focus on ourselves, because the rest is not in our control. It cuts out a lot of stress when you just focus on yourself.”

For their short dance, the team chose music from the Cinderella soundtrack by Patrick Doyle. For the free dance, they are using “Polovetsian Dances” from the opera Prince Igor by Alexander Borodin.

“Obviously it is a Russian story,” Tobias explained of their free dance. “Ilia is the prince and I’m a kind of lowly slave girl that he picks. It’s really romantic actually, a good contrast to Disney’s Cinderella in the short dance.”

“We just think the piece is really powerful and we haven’t heard it in ice dance in a while,” she added. “We just thought it would be fun to do a program like that.”

The team is not setting any specific goals for themselves for this season.

“We’re just doing our job,” Tkachenko summed it up. “We don’t really focus on goals results-wise to be honest, because that is not in your control. We’ve learned over the years that you just can’t look at your score. We just train and we just want to do our best and focus on ourselves.

“As long as Igor is happy with how we are doing, then we’re happy,” his partner elaborated.

Thus far coach Shpilband should be more than happy with how the couple is progressing. They are a great match and complement each other very well. You might think – what if? What if they had stayed together six years ago?

“Of course (you think about it), but I never would trade for anything from my experience skating with Deividas,” said Tobias. “He is such a wonderful person. We had a lot of terrible moments in our career, but there were a lot of amazing moments and it was a privilege to get to know him and to experience everything with him. I love him like a brother.

“Of course, I wonder about skating with Ilia. When we split and he went back to Russia, I was really devastated,” she recalled. “I almost stopped skating, I was so upset. But I think everything works out the way it is supposed to.”

“Everything happens for a reason,” agreed Tkachenko.

Their next competition will be in a few weeks at 2015 Tallinn Trophy, their third ISU Challenger event this season, followed by the Israeli National Championships.