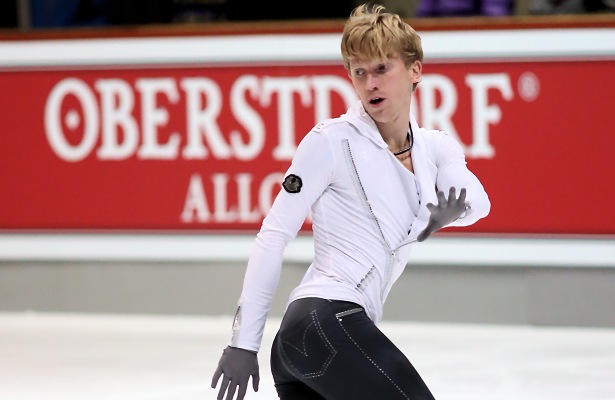 At the end of each season, Russia’s Konstantin Menshov finds himself considering his options regarding retirement or continuing to compete. Thus far, he has remained in the game in the ever-growing men’s world of figure skating.

As early as last month, the veteran skater from St. Petersburg proved his success and placing third overall ahead of many younger competitors at 2015 Nebelhorn Trophy in Oberstdorf, Germany. Today, at 2015 Finlandia Trophy, Menshov even bettered that result and won his first international since 2012 NRW Trophy.

At Nebelhorn, the 2011 Russian national champion landed a quad toe-double toe, but tripled and stumbled on his planned quad Salchow in his short program, placing sixth. One might chalk it up to tiredness as the trip from his hometown to Oberstdorf turned out to be very long and he only arrived the evening before the competition in the mountain village.

“I didn’t expect the trip to be that difficult,” said the 32-year-old, who is keeping last season’s short program. “We had to change in Moscow and in Munich and we had to wait everywhere. On top of everything, in the bus (from Munich to Oberstdorf) I hurt my back. But I’m happy that I was able to overcome all this and take the bronze.”

In Oberstdorf, his new free skate to “Mad World” and “Radioactive” was much better. For the first time, the 2014 European bronze medalist went for three quads – two toes and one Salchow. He missed the second toe, but finished second in the long and climbed to the third overall.

“This program feels more comfortable for me than the one I had before,” he admitted. “I think it is well constructed and feels easy to skate. I like the music. Even in the second half, when my energy goes down, this music is pushing me and gives me the chance to perform with emotions.”

“Last year I had to fight from the middle in the program,” Menshov explained. “Now it is fine. The program last year almost made me panic and I was fed up with the music quickly.”

In the short program at Finlandia Trophy, Menshov hit a shaky quad-double toe combo and fell on the quad Salchow in the short.

“At least I rotated the quad,” he commented. “In Oberstdorf  I tripled it. Here, I did a quad and fell, so hopefully next time I’ll do it.

He stood in second place going into the long and then laid down a solid performance that included an excellent quad-triple toe and quad Salchow to rise to first place.

“I believe last time I won an international was two years ago in Dortmund (Germany), but the field wasn’t as strong as it was here,” said Menshov. “Usually I am kind of stuck to second and third places.”

“The two quads in the long were good,” he added. “Too bad I didn’t do the third one and I didn’t do the first triple Axel. I got too excited after the two quads. I am very happy of course to have won, and I realize that if I skate clean, I am competitive and can win medals.”

This season is a bit different as Menshov, who is coached by Evgeni Rukavicin, selected the music himself.

“I feel very comfortable with this program and therefore I have more confidence,” he offered. “I fell on the third quad, but I could have landed it. I rotated it and that means I have enough strength for it.”

Summer preparations and training went well for the skater and a lot of work was done.

“We are still continuing our off-ice training,” Menshov offered. “For me, each season starts from scratch. However, this year it was a bit tough for me to get started as my last competition was Russian Nationals (in December – he finished 4th) and I had a long break from competition.”

In September, Menshov performed his short program (“Rotting Love”) at a local competition in St. Petersburg, and then took part in the Russian test skates in Sochi before competing at Nebelhorn Trophy and Finlandia Trophy.

“Each competition is a new experience and teaches you something,” he said. “A successful competition like in Oberstdorf gives you confidence, obviously.”

Menshov has had a long career, winning many medals at international events, however, he has yet to make the World team. A journalist asked him at the press conference in Oberstdorf if he felt overlooked by the Russian Federation.

“I think this is true,” he responded, “but it also depends on me. If I perform consistently, I won’t be overlooked.”

One factor that motivates the Russian to continue is his wish to do three quads in a free skate.

“I did think about whether I should continue or retire after last season,” Menshov shared. “My goal is to qualify for Europeans and Worlds and to get a medal.”

Menshov will compete next at Skate America and NHK Trophy for his Grand Prix events.