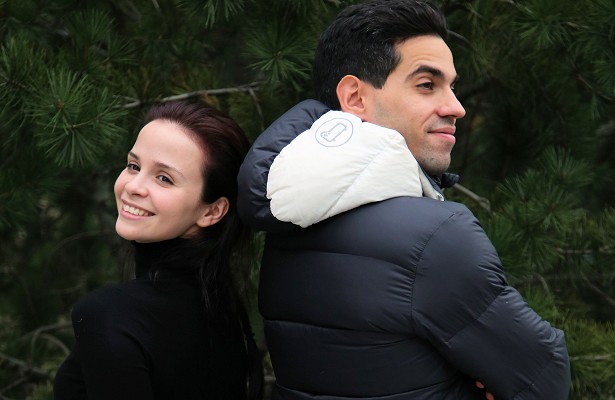 Italy’s Anna Cappellini and Luca Lanotte feel they are back on track after a disappointing 204-15 figure skating season.

Italian ice dancers Anna Cappellini and Luca Lanotte have just qualified for their fourth Grand Prix Final of Figure skating, which will be held next month in Barcelona, Spain, and they are enjoying the progress they’ve made after a disappointing season last year.

Last year, the Grand Prix (GP) series was a big disappointment for the 2014 World champions. The team finished third at 2014 Cup of China with subpar performances, and then had to withdraw from 2014 Trophée Bompard as Lanotte was injured. Only towards the end of the 2014-15 season did the team rally back, taking silver at the 2015 European Figure Skating Championships and fourth at the 2015 World Figure Skating Championships.

This year, the 2014 European champions upset World silver medalists Madison Chock/Evan Bates (USA) at Cup of China to win the first Grand Prix title of their career. At Rostelecom Cup they finished a close second to the current GP Final champions, Canadians Kaitlyn Weaver/Andrew Poje. The Italians impressed with crisp performances and strong programs—music from The Merry Widow for the short dance and La Dolce Vita” for the free dance.

Being back on top is what they had hoped for and it felt great compared to the beginning of the season they had last year.

“It feels like we are back on track,” said 28-year-old Cappellini. “We just have to keep working, but there is no drama. We just try to improve what we have. We stayed because we think we can improve ourselves and enjoy this part of our career a little bit longer. It is a dream come true.”

“I feel the same,” said Lanotte, 30. “For us, it was important to start the season showing the judges and the people that we are back in the game. We are in the elite of ice dance in the world and we can fight for the title again; be the champions again and show the best that we have.”

Both of their programs suit them well and have played a big role in their success this season. Last year, the Italian champions tried a different, darker style with “Danse Macabre” for the free dance, however, it didn’t really work out well. It wasn’t until the end of the season that the ice dancers appeared to have “grown into” their program.

This season, Cappellini and Lanotte picked the music themselves, carefully choosing pieces that they could identify with and which felt close to them. Cappellini knew she wanted to do something very Italian and selected La Dolce Vita for their free dance music.

“We thought it was a good year (for it) because we needed something that was ‘us’ instead of something everyone kept saying wasn’t a good vehicle for us—especially the free dance,” she explained. “We needed something that came naturally for us and that would be really easy for us to deliver and to express. So it felt like it was the year to play this card.”

Her partner found the Merry Widow by randomly listening to music while searching for a Waltz piece as early as in January.

“Last year was so tough,” said Lanotte. “We wanted to turn the page and start immediately after Worlds, so I started to look around. I listened on YouTube, on CDs to Waltzes, and I just found it randomly. I went on the internet and started reading everything about this operetta. In the end, I found the opening of the operetta that basically has all the tracks in it. We found a way to put together everything and I was really happy because I really love this music. I think it suits us and it is not generic.”

The Italians also like to have a theme in their short dance.

“People like that more,” Lanotte pointed out. “We started to do it a few years ago with Seven Brides for Seven Brothers and then 42nd Street, so we wanted to keep going with it because it is nice and likeable.”

Mounting the programs with their main coach, Paola Mezzadri, along with help from Marina Zueva and Massimo Scali, the choreography went fast and came naturally. The dancers spent the summer working hard, including incorporating some altitude training.

They also recently took part in some shows in Italy and there was only one short distraction—Cappellini got married in June to long-time boy friend, Czech-born and now Italian pair skater, Ondřej Hotárek.

“We just took the slightest possible break for my wedding,” recalled Cappellini, laughing. “I think Wednesday of the week I got married I stopped going to the ice rink. I had a few things to prepare.”

“We were able to bring a lot of worlds together—the Italians, the Czechs and skaters. We partied until five a.m.,” shared Cappellini.

She admitted that she still hasn’t quite gotten used to calling Hotárek her husband instead of her boyfriend. The couple had lived together before, but Cappellini said they are now feeling more like a family.

There was only time for a short break after the wedding, and in order to avoid missing training, they took advantage of the beautiful setting of Folgaria in northern Italy for altitude training.

“We were careful,” said Cappellini. “We didn’t want to lose time like the year before, and wanted to plan everything better. We did just a couple of weeks of exhibitions and the rest was all training in the mountains in Italy. It is really high and it helps us with the conditioning when we come back to the city.”

As a result, their programs are smoother and easier to get through. The elevation in Folgaria, Italy, is approximately 1,169 meters (3,835 ft.).

“We can’t really complain,” Cappellini continued. “It was one of the best summers we’ve had. In the past three years there was always some kind of problem, definitely last year. The year of Carmen we changed the free dance. This year it was nothing.”

The team was ready when they debuted their programs at 2015 Lombardia Trophy in September, winning the event with 177.22 points along with positive feedback. However, they admit it was a bit nerve-racking to present the programs for the first time as one can never gauge the reaction.

“Everybody who had seen the program had given us really good feedback, so we were half-convinced that it wasn’t going to be bad,” Cappellini noted. “We had the impression that people liked the program. Of course, it was at the beginning of the season and if it wasn’t good, it is always such a problem to figure out how to modify a program. Even last year, people said, ‘you should maybe change the program,’ but that isn’t easy. Anything that is badly practiced will look just as bad. It doesn’t matter if it is better material as everyone else has practiced theirs for six months and you come in with a month preparation.”

“Of course, we think it is sweet,” Cappellini offered. “One of our strongest points as partners is that we really come together when there is a crisis. It is really motivating. We love the moment when we feel it is us against the world and when we prove that we can do it one more time.”

Now that they are preparing for the GP Final, they plan to work even harder—especially on the short dance.

“We want to improve our performances, because the short dance is not a 100 percent,” revealed Cappellini. “We feel like it is not flowing enough, although in training we are so much better. In competition, there is something uncomfortable.”

“The free dance is more natural and has more natural transitions,” Lanotte added. “Our short dance is so full of steps and technical stuff. We are always in a closed position, and that is so hard to skate in. So often you see open positions, skating hand to hand, and this is easier.”

Therefore, the plan is to polish the short dance more and give it more flow.

The goal for the Italians this season is to make the podium at the GP Final, as well as the 2016 European and World Figure Skating Championships.

“We want to compete for the big titles, for sure,” confirmed Cappellini.

“At Europeans and Worlds, we want to be in the medals, and of course the best would be winning—from here to the Olympic Games,” Lanotte added.