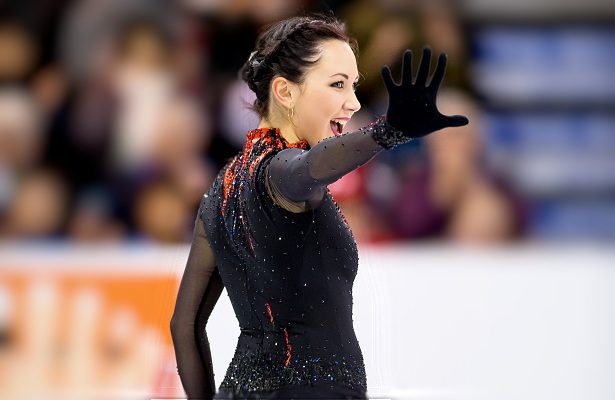 Russia’s Elizaveta (Liza) Tuktamysheva reigned supreme in the past season, collecting gold medals at the World and European Championships, the Grand Prix Final, Cup of China Grand Prix, and a couple of smaller competitions.

The World Champion started her Grand Prix season at Skate Canada International last month with a silver medal. While she faltered in the short program, she rallied back in the free to pull up from seventh to second place with the best free skate.

“I am very pleased that I managed to skate a basically clean free program,” she said. “I am happy that I did the triple Axel, although with a little error, but still I did it and that is a big step forward for me.”

Overall, the Grand Prix Final Champion felt the competition in Lethbrige, AB, was helpful for her in terms of progress.

“I did the triple Axel in the early morning practice which I wasn’t able to do before,” she explained. “In the free program I went out calmly, I was focused and I felt a sense of peace. There was some nervousness, obviously, but it is always there at any competition.”

Tuktamysheva stepped out of the triple Axel, but landed seven clean triples in the long to the Peer Gynt Suite by Edvard Grieg that was mounted with Stéphane Lambiel.

“Stéphane Lambiel did the program and he suggested the music from Peer Gynt,” the 18-year-old offered. “To be precise, Stéphane suggested on part of the music. All of us found another one and I picked the third one. I really wanted something with a symphonic orchestra. When I heard it I knew right away that this will be the final part of my program.”

In the short program to a modern version of Carmina Burana, which was choreographed by Benoit Richaud, things went wrong. The European Champion didn’t go for the triple Axel and then doubled the Lutz and her triple toe-triple toe combination was wobbly.

“I can’t explain what happened (in the short program),” admitted the European Champion. “In practice everything worked better and I was more confident than at other competitions. I felt athletic, I felt that this is my body and I thought I’m finally getting into shape.”

However, during the warm-up, the skater felt she wasn’t in her body anymore. Regardless, she doesn’t feel that replacing the triple Axel with a double Axel in the short program threw her off.

“We decided not to take the risk and do the triple Axel in the short program, but the performance nevertheless wasn’t clean,” the former Russian champion noted. “In training I am doing the triple Axel on a regular basis. This jump is working better than at the beginning of the season.”

The next day Tuktamysheva regrouped and came out much stronger.

“I am by principle not a depressive person,” she offered. “Yes, I didn’t get many points in the short program as there was a silly mistake, but the day ended and I had to move on. You are gaining experience with each performance. Even though it was a bad skate (in the short program), I learned a lot from it. I just have to be able to put it behind me and focus on the next performance.”

The skater, who is coached by Alexei Mishin and Tatiana Prokofieva, was able to move on and took the mishap in the short program as a learning experience.

“With each year you are learning from your experience and you start to realize that not always everything will be good and that you are lacking consistency not just because of one reason, but of several. Everybody makes mistakes. Even the Olympic Champion Yuzuru Hanyu made errors (at Skate Canada). Each athlete can miss something, but you need to tone down these thoughts and pressure, suppress them and forget about them. You just have to go out on the ice and do your job.”

“For most athletes after a very successful season, the next one is quite difficult,” coach Mishin observed.

The skater from Saint Petersburg, Russia, agreed, admitting that it can take a while getting back into the new season and that is harder this season than last.

“Last year I was in very good shape and I remember these feelings,” she analyzed. “After my vacation the feeling was different and I couldn’t get back the kind of feeling I had at the European and World Championships for a long time. My body was in a very comfortable condition then and I wanted to return to this feeling quickly and get my body into the same condition right away. But that didn’t work so fast.”

Nevertheless, Tuktamysheva feels that she is gaining momentum now, and is looking forward to her next Grand Prix event at 2015 Trophée Bompard in less than two weeks.

“I hope that I find myself back step by step and there won’t be such failures again,” she summed up.