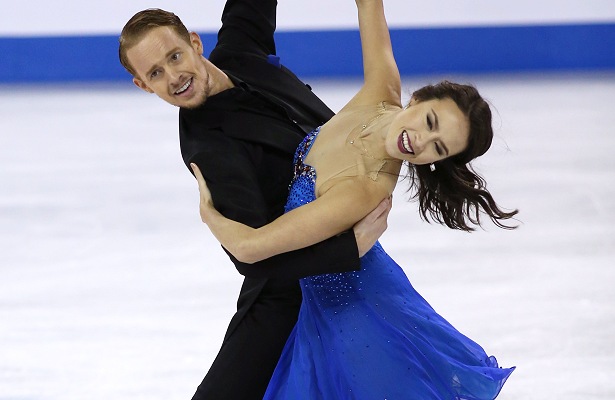 U.S. ice dancers Madison Chock and Evan Bates have completed their two assigned Grand Prix (GP) figure skating events, and are more than likely well on their way to the GP Final which will be held for the second time in Barcelona, Spain, next month.

Earlier this season, the 2015 World silver medalists competed at 2015 Nebelhorn Trophy, an ISU Challenger series event. While they won with more than 20 points to spare, they were also told that their short dance to “Dark Eyes” did not capture the style of the polka rhythm.

In fact, this was actually their third time creating a short dance that met the standards for the required rhythms for the 2015-16 season. The first was scrapped early on in the summer.

“The main reason for the change was to just really emphasize the rhythm,” explained 26-year-old Bates. “We wanted to do the foxtrot because we think it’s a good rhythm for us and it suits us well.”

The team worked with their ballroom dance instructors, Steve and Susan McFerran, who choreographed the beginning to give the ice dancers an authentic feel for the program.

“I think in the long run of the season, our goal is to do well in Boston at Worlds and we felt like this approach would take us there,” said Bates.

Chock, 23, views this season as a fresh start and a way to reinvent themselves and push their boundaries.

“We have two great programs now that will help us with that, and I think they are different for us and it will be something we’ll keep building upon,” she summed up.

At Skate America, the defending champions unveiled their new short dance set to “More” for the Foxtrot and “Unchained Melody” for the Waltz. They were awarded a level four for their twizzles and curve lift, while the Waltz pattern merited a level two and three. Nevertheless, they earned a new season’s best with 70.56 points.

The team, who trains under Igor Shpilband in Novi, Mich., were happy with how it went, especially given the fact that they were trying to create a more elegant sophisticated routine.

“It was kind of a stressful two weeks for us getting ready for the event, so considering the timetable, we were thrilled,” said Bates.

“It was a good day,” agreed Chock.

In Milwaukee, Wis., they turned in a strong performance with their Free Dance to Rachmaninov’s “Concerto No. 2,” which featured level four lifts and twizzles. The step sequences garnered a level three and a level two, and the team posted another season’s best of 102.66 points. With a total of 173.22 points overall, they won their second consecutive Skate America gold.

“This free dance was a little bit of a fight for us,” Chock confessed. “It makes it that much easier the next time we go to competition to know that we will always have that fighting spirit. This is a program that is really special to us and we enjoy every time we perform it.”

Two weeks later, the team competed in Beijing at 2015 Cup of China where they finished second overall. Just over four points separated them from Italy’s Anna Cappellini and Luca Lanotte who took first.

The two-time U.S. national silver medalists delivered a good short dance which featured a level four curve lift and level three footwork, however, they only received a level one on their twizzles. They scored 65.36 points.

“I had a little bit of mishap on the twizzles which was a really costly error, especially in the short dance, so that was unfortunate,” Chock explained.

The ice dancers still feel connected to the music and enjoy performing it, but feel it just needs more time to grow.

The team upped their season’s best (103.80) on the free dance which featured level four lifts, twizzles, and spin, however two of the step sequences were rated a level two.

“We were very happy with how we skated,” said Chock. “Our free dance kept building and growing and this is just another step that we hoped to take continuing forward in the season.”

It was Shpilband’s idea to use Rachmaninov for the free dance, and he, along with Antonio Najarro, choreographed the routine.

“We had such a wonderful experience working with Antionio last year, so we thought his unique and creative style would be a perfect fit for our free dance this season,” Chock offered.

Heading into the GP Final, Chock and Bates plan on making a few choreographic changes to their free dance in order to showcase their emotions, speed and power.

“We will continue to train our new short dance and focus on raising our technical marks for the Final,” said Chock.