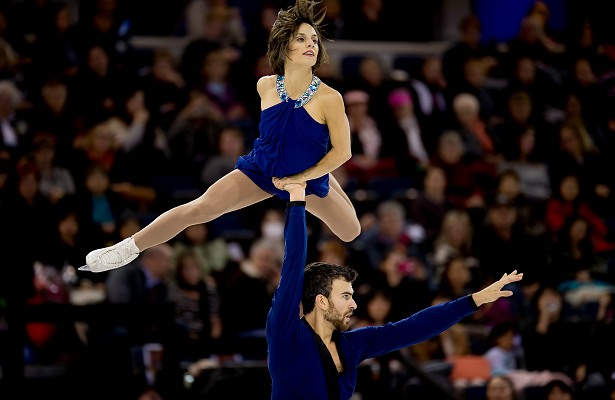 Since their partnership began in 2010, Canada’s Meagan Duhamel and Eric Radford have pocketed a total of nine Grand Prix medals. Last week, the team made it 10 when they won the pairs event at 2015 Skate Canada in Lethbrige, AB.

The 2015 World champions felt prepared going into Skate Canada as they had already competed twice this season.

“We always like to do a couple of events because it usually takes a couple of competitions to feel comfortable back in the competitive arena again,” said Duhamel. “We spent all summer doing a lot of shows all over the world.”

“Those two competitions gave us some perspective on how we want to handle our own expectations and the pressure of entering the season as world champions,” Radford, 30, added. “It’s easy to say, ‘Well let’s just do the same thing as last year.'”

However, they realize they are in a different position than last year and that they can’t always “trick” themselves into feeling a specific way.

“You have to start at the first competition (of the season) and go through the motions a couple of times to know exactly how you are going to feel,” Radford explained. “What Meagan and I need to be thinking and concentrating on is how to have our best performances.”

The skaters, who are coached by Richard Gauthier, Bruno Marcotte and Sylvie Fullum, are not even certain it’s even necessary for them to do a second quad throw at every event.

“We have it in our back pocket,” said 29-year-old Duhamel. “We’ll decide at the moment if we need it or not before competitions and if it’s worth it to try or not.”

While the quad strategy world-wide unfolds for the pair teams that attempt it, Radford feels that when it comes down to it, the individual teams will determine their capabilities and how far they are willing to push themselves.

“Everybody wants to win, so people find a way to do what they can in order to win,” he acknowledged. “It’s very high risk, but it is high reward. I think sometimes people think, ‘Oh they’re doing a quad and that’s why they are getting these big scores.'”

In fact, Radford points out that a lot their big scores from last season was in large part due to improving their basic pair elements, as well as their side-by-side triple Lutzes—something they do fairly well.

“I think it will be very interesting to see the teams that go for (the quad throw), especially the teams that can do it somewhat consistently,” said the skater from Balmertown, Ont. “Even if you look at the men’s (discipline), there are lots of men who can do the quads and can do them very easy, but it’s a very difficult element to do. It’s not just something that’s magically going to happen. It takes a lot of hard work and focus.”

Duhamel pointed out that when they decided to put the quad in, they were already two-time world medalists and had consistent jumps.

“So it was like, ‘Ok, we are going to add something new that’s big risk,’ and it was one big risk,” she explained. “As opposed to some people who are maybe thinking of doing a quad when some of their other elements (may not be) consistent, I think the strategy may change.”

The skater from Lively, Ont., also thinks a lot of folks may feel they win solely because of the quad, however, that’s not true.

“Our quad Salchow gets nine points when done well and our level 4 reverse lasso lift in our long program also gets nine points,” she explained. “Last year, we were able to score high and win competitions because we were consistent, and we got level 4 elements with strong GOEs (Grades of Execution). A well done level 4 death spiral in the short program is worth like 1.6 points more then a side-by-side triple toe! We collect a lot of points for the quality and levels of our spins and lifts, and I think that is worth mentioning.”

Coming into this season as the current world champions, Duhamel and Radford know they are up against some tough competitors, and that will play a big part in how they approach each event mentally.

“I thought we did a pretty good job of getting back to that sweet spot that we were able to find last season that gave us our best skates,” Radford said of the win at the 2015 Skate Autumn Classic earlier last month. “I think that as the season goes on, in regards to what we are able to achieve technically, I think that trying to do two quads is a huge mental undertaking.”

Duhamel summed up in one word their feelings at the Skate Autumn Classic. Overwhelmed.

“That’s how we feel every day when we are training our programs,” she admitted. “We think that that is part of the process. Last year, when we introduced the throw quad Salchow, we felt overwhelmed at first, and then eventually it became more comfortable. We don’t know until how the season plays out if doing two quad is the right calculated risk or not. We’re going to learn that as the season goes on and as our programs progress. The only way to learn that is through experience.”

Bottom line, their strategy will have an effect on how they feel when they are in the starting position.

“It’ll be interesting to see, even for us, how that develops and unfolds,” said Radford. “We do know how to get ourselves to where we want to be to get our best skate. Anything can happen in the moment, and we understand that. Accepting that is part of the reason we had so much success last season. We had no expectations last season, and winning worlds was more than we could have ever expected.”

In Lethbrige, the four-time Canadian national champion put out a good short program to Elton John’s “Your Song,” which featured a level-four triple twist, a throw triple Lutz and a level-four lift, but Radoford touched down on the side-by-side triple Lutz. They scored 72.46 points for first place.

“It wasn’t perfect,” Radford admitted. “It was a little shaky and we had to fight for a few things, but it was a good performance. I think we showed improvement in the areas that we wanted to.”

“Before we skated it felt very challenging,” Radford confessed. “We felt pretty nervous. We just put a lot of pressure on ourselves. We really wanted to go out there and have a great performance.”

“We will prepare for NHK the same way we prepared for Skate Canada,” said Duhamel. “Working on the emotion of the programs and our connection with each other and with the music, as well as making sure our technical elements are smooth and effortless.”

“I think Meagan and I will be looking to carry the momentum from skate Canada onward to NHK,” said Radford. “We know we have tough competition there but that just makes it more exciting!”