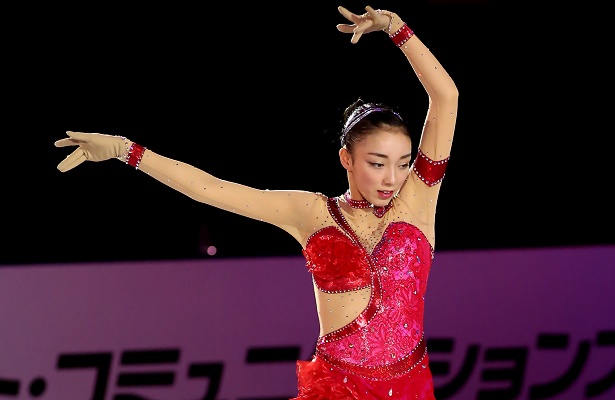 Japan’s Rika Hongo performs to “Let’s Get Loud” at the 2015 Cup of China gala.

Japan’s Rika Hongo kicked off her 2015-16 season by winning two titles before the Grand Prix (GP) of Figure Skating series. As early as August 10, she won both segments in a domestic competition called “Summer Cup” held in Shiga prefecture, Japan. Two months later, she followed up with two strong performances in the Challenger Series at 2015 Finlandia where she scored a personal best total score of 187.45 points and won the gold medal.

During the first week of November, the skater from Sendai arrived in Beijing, China, to take part in her first GP event this season, the Cup of China.

In the short program, the student of Hiroshi Nagakubo skated to the music of “Quidam” from Cirque du Soleil, a program choreographed by Akiko Suzuki—another student of Coach Nagakubo. Except for an edge call on her triple Lutz, Hongo delivered a performance of high quality, including a nicely landed triple flip-triple toe combination, a double Axel, and all level four spins and steps. She was rewarded a personal best of 65.79 points, and headed into the free skate in second place with only a few points behind her compatriot Mao Asada.

Despite feeling nervous going into the short, the 19-year-old felt she performed the best she could and was happy with the result.

In the free skate, the 2015 Four Continents bronze medalist delivered another quality performance, receiving another personal best of 129.97 to win that segment. However, her total score was just a mere 1.72 points from winning the gold which went to Asada.

“I think I did all that I could do, so I felt very excited right after my performance,” the silver medalist recalled. “I used to get very nervous before my last jump, but today the audience was beating time to the music with their hands for me from my step sequence to the end, so I was really having fun! I think it also helped my performance as well as the score.”

Before the competition, the GP finalist from last season once stated that one of her goals this season was to achieve 65 in the short program and 125 in the free. She achieved both early in the season.

“I didn’t expect I could get such high scores, so I was very surprised and very happy,” said Hongo, who now trains in Nagoya, Japan.

Nevertheless, some regrets remained in the 2015 Finlandia Trophy champion’s mind.

“After I checked my protocol, I realized there were several elements on which I lost a few points,” she recalled. “Especially the edge errors on my Lutzes, so I felt very regrettable on the result afterwards.”

However, the 2014–15 Japanese national silver medalist made it clear that the regret was not about the second finish.

“It is not about the placement,” she explained. “It is because I didn’t jump a good Lutz. I feel I could have done better. Nevertheless, the 129 points gave me much confidence.”

Two weeks later, Hongo arrived in Moscow, Russia, hoping to perform the best she could, defend her title from last year, and possibly qualify for the GP Final. Unfortunately, things did not go as planned.

In a very competitive field, which included the reigning Olympic champion, World bronze medalist, Skate America winner, and Four Continents winner, the defending champion delivered a decent performance in the short program which received 63.45 points. However, it was only enough for sixth place heading into the free skate.

“I feel a bit regrettable,” Hongo told the press. “I got nervous and couldn’t pull out all the stops, but I think the good point is that I got more used to my short program and improved the presentation.”

In the free skate, under the pressure of needing a podium finish for a ticket to Barcelona, Hongo popped a triple Salchow into a double, fell on her triple Lutz while receiving an edge error call and an under-rotation call, and stepped out on her triple Lutz–double toe combination again with the edge and under-rotation calls. She received 115.67 points for the free skate and 179.12 in total for an overall fifth place finish.

“The results are very regrettable,” said the former Japanese junior champion. “I made mistakes on which impacted me mentally, but I started to relax and enjoy the performance again from the step sequence because the audience was clapping for me.”

With a fifth place finish in Moscow, there is very little chance of Hongo qualifying for the Final in Barcelona, Spain, and will be dependent upon the results of the NHK Trophy event next week.

“I was able to find out many of my problems in this competition,” Hongo shared. “I must work harder after I go back to Japan. I am not where I want to be yet, but I will work harder. My aim is to do better in my next competition.”

In retrospect to her competitions so far this season, the skater acknowledges that she still has a lot of work to do.

“I still don’t think I have become a top skater in the world,” said Hongo, “but my goal is always to be able to compete against the top skaters who I used to watch from outside. I don’t think I am at the same level with them yet, so there are a lot of things to do.”

It’s clear that in order to up the ante technically, Hongo will have to work on her triple Lutz jumps.

“I really need to fix the edge call issue and pay more attention in training,” she admitted. “I decided to upgrade my layout, replacing a Lutz in the short, and two Lutzes in the free instead of two Salchows, which I used to do last season. If I don’t do it well, it will get fewer points than the Salchows and it will be meaningless.”

Hongo also mentioned the idea of challenging the triple Axel in the future after losing to Mao Asada who won 2015 Cup of China with two beautifully landed trademark jumps.

“I knew it is important when I was told by my coach to try and practice it, but watching a skater at the same competition doing it was much more impactful,” she revealed. “It really made me realize it will definitely become necessary in the future.”

At the same time, the student of Nagakubo is well aware of the importance of artistry and presentation. Originality is what she is looking for this season.

“My short program is very different from the classical music I used to skate to in previous seasons,” Hongo observed. “It is very new, and unique. Akiko Suzuki choreographed some moves that I’ve never done before, and the creation of the work was very fun.”

As for the free skate, Hongo really enjoys the music from Riverdance and suggested “Reel Around the Sun” to Kenji Miyamoto who choreographed it. Although it is a frequently used piece of music in figure skating, she felt confident that she could present it in her own style.

“The essence of Riverdance is to perform using only your feet but not so much of the upper body,” Hongo said of the Irish style of dance. “It is very difficult, but I want to leverage my speed on the ice and add some original moves to the program.”

The skater also added that they elected not to add a spiral, but instead, add more footwork and tap dance moves which fits the tempo and style of the music.

The Sendai native said she is on a journey to define herself as a skater, and is still looking for her biggest weapon.

“I don’t think I have a clear weapon like the triple Axel for Mao Asada,” said Hongo. “Last season, I relied on my momentum and consistency of the jumps to achieve the results, but I want to gradually find out what my biggest strength is and further grow it as my weapon in order to compete against the best of the world.”

Hongo admitted it would be a difficult journey.

“Coach Nagakubo is very strict and he doesn’t praise me much,” said the skater who left her hometown Sendai at the age of nine and followed Nagakubo to Nagoya. “I actually often cry during training sessions, but I believe compared to crying after competitions, tears in training reward you much more, so I will just follow Coach Nagakubo’s instruction and continue to work hard.”