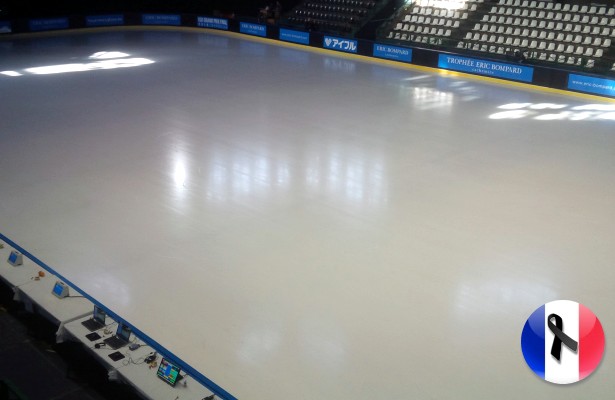 2015 Trophée Eric Bompard was cancelled in the wake of the attacks that took place in Paris, France, on November 13, 2015.

There will be no medal ceremony at Trophée Eric Bompard in light of the horrible attacks that were waged in Paris, France, on November 13, 2015.

“Dear Friends, I have the regret to inform you that due to funeral day in France and mainly due to the state of emergency, the French government has decided to cancel the end of the Bompard Trophy, fourth of the ISU grand prix of figure skating,” said French figure skating federation president, Didier Gailhaguet to a packed room at the Patinoire Meriadeck in Bordeaux, France. “The FFSG and the ISU are completely destroyed and of course extremely disappointed. We both express our deepest condolences to the families that have suffered last night the loss of 130 innocent French people.”

In attendance at the quickly-organized meeting were skaters such as Patrick Chan, Tatiana Volosozhar and Maxim Trankov as well as coaches, officials and journalists.

Earlier in the day, a press release was distributed announcing that the event would continue. Increased security measures including bag checks were implemented at the venue in the morning. Later in the morning however, the minister of interior affairs of France, Bernard Cazeneuve, and the Mayor of Bordeaux, Alaine Juppe, informed organizers that the competition had to be cancelled.

“We feel completely sorry for all of the family of skating and especially you skaters that have worked hard to be here,” Gailhaguet continued. “My team of the organizing committee and the ISU…will do the utmost to help you.”

The announcement was followed by a moment of silence and a stirring recital of the French national anthem that brought many to tears including French skaters Vanessa James, Maé-Bérénice Méité and Morgan Ciprès, as well as Russian coach Nina Mozer.

The announcement of the cancellation and recognition of the tragedy in Paris triggered a release of emotions among many of the athletes, particularly members of the French figure skating team who had been trying to operate in “business as usual” mode since last night.

“It’s the safest decision for all the athletes, the audience, the judges, everyone. Even if it is hard for everybody,” said French ladies competitor Méité. “I think it’s the safest way because we never know, we can’t know now,” she said, referring to the possibility of further violence. “It’s a huge thing that happened in Paris.”

Méité learned the news of the late-night attacks in the morning.

“I woke up this morning, I didn’t know about anything because I slept very early and then I saw all the newspapers and stuff like that. I was like ‘Something is going on, it’s unusual.’ Then, I went on Facebook and they asked me the question ‘Was I safe?’ and I thought that’s weird because yesterday everything was okay and then I read about all this and I understand that it’s a very big deal and it’s hard for all the family and all the people who have lost people for nothing. It’s very hard.”

The two-time French champion checked in with friends to ensure their safety.

“My parents are here so this is good,” she said in relief. “And my friends are okay so all my prayers go to the ones who lost something for nothing because some people just went to a concert or something like that and lose their life for nothing.”

“It’s hard to speak. I have no words about what happened yesterday,” said French pair skater Ciprès, who was overcome by emotion and embraced by Méité before departing the meeting.

“I am very upset and very sad first of all for the all the innocent people who died yesterday for no reason,” said French pair skater Vanessa James who was visibly emotional. “And it’s pretty scary because we are actually lucky to be in Bordeaux. Normally the competition is at Bercy (Arena) and the attacks were just around this area. And so I have to say that it’s actually destiny that God placed us here today and not in Bercy because we don’t know what could have happened. We’re scared to go back to Paris because we don’t know what’s going to happen next, we don’t know where we’re safe. It’s a little emotional for everyone.”

The decision to cancel the event struck an emotional chord in the Olympian who had been trying to maintain composure all morning.

“We tried to keep it to ourselves this morning,” said James. “We tried to stay focused, but here knowing that the competition and that every French competition in every sport is cancelled today by the government…it just set off all of my emotions, actually.”

“It is a shame also for the other athletes, the Russians, the Canadians, everyone who came here to skate for the Grand Prix Final who worked hard,” she added.

But, James was buoyed by the level of support from her competitors.

“I saw all of their posts on Instagram and Facebook and I know they’re with us,” she said. “But it’s nice to know that we have the support of all of our competitors from every country. They’re here and their hearts are open for us and honestly it helps to know. When we were eating breakfast this morning, they came and made sure we were okay and that we didn’t have family in the events and asking how we feel to skate and if we were strong enough to skate.”

Like James, Gailhaguet also observed the palpable camaraderie among the skaters.

“The world of sport is a fraternity and of course they compete and they want to win but it’s a family,” said Gailhaguet. “And in this moment, the family should stay together and the world of sport should have a knee down today because of these (senseless) people but a head up. That’s what is the role of sport and that’s what I observed among the skaters, among the coaches, among the judges, among the officials. Everybody was close to the heart of the French people today and I am absolutely very touched in my heart and I really felt this was an incredible moment for myself. I never thought that could happen but it has happened and in this moment it’s great to know we have a family.”

The cancellation of the grand prix event puts skaters seeking points to qualify for the final in uncertainty. Following Gailhaguet’s announcement, Peter Krick, the ISU’s sport manager of figure skating shared a proposal.

At this announcement, Canadian Patrick Chan, who was in fifth place following the short program, made eye contact with his coach, Kathy Johnson who politely sighed. With aspirations of moving up the rankings in the free skate, a fifth-place finish at Trophee Eric Bompard combined with his first place finish at Skate Canada International would garner 22 points for Chan and make qualification for the final questionable.

In James’ case, the skater with grand prix final hopes is pleased at the prospect that she and partner Ciprès could finish second if the ISU adopts the proposed standing decision but she is still uneasy.

“I guess it would be bittersweet because we would go directly to the second place for the total of Eric Bompard,” said James. “Bitter is that we worked hard for the long program also.”

James recognized that the tight scoring between the pair teams ranked second to fifth after the short program meant the free skate would be important.