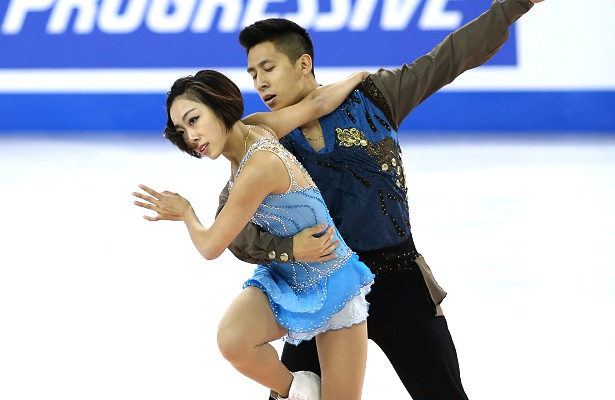 China’s Wenjing Sui and Cong Han had a strong start for the 2015-16 figure skating season beginning with Skate America last month. In Milwaukee, Wis., the reigning world silver medalists added their first gold to a collection of nine Grand Prix medals which they have earned in the past six years on the senior circuit. Two weeks later, they followed up with a second place finish at 2015 Cup of China, a placement good enough to secure them a ticket to Barcelona, Spain, for the Grand Prix Final.

At Skate America, despite a costly mistake in the pair combination spin in the short program, as well as fall on a triple Salchow in the free skate, the pair from Harbin pulled together two decent performances and won the event overall with 202.00 points.

“This is our first time to win a Grand Prix event,” Han, 23, acknowledged. “America is a very lucky place for us.”

“It was good, but there was a little error on the side by side jump,” noted Sui, who had a wobbly landing on the triple toeloop.

“After Skate America, we worked on the details to make sure we get the levels,” said Han. “We particularly paid more attention to the pair combination spin which we failed.”

“I would give us 80 points out of 100 for that performance,” he added, regarding their improvement. “Overall it was not bad, but there were three elements we didn’t get a level four on which shows we still have work to do. There are more points to get.”

Compared to Skate America, Sui felt that skating on their home rink helped them to improve.

“We were more relaxed in front of the home audience,” said the 20-year-old. “Competing at home makes you both more nervous and more excited at the same time, but for us, we were able to transform the pressure into motivation and enjoy being on the stage.”

The following day, the two-time Four Continents champions delivered another strong free skate for a season’s best of 141.22 points, however, it was not enough to beat the reigning European champions Yuko Kavaguti and Alexander Smirnov. The Russians landed two quad-throw jumps and scored 216 points—less than half a point from Sui and Han’s total score of 215.62.

Coach Hongbo Zhao revealed the reason for not performing the throw quad after the performance.

“We were planning to add the quad-throw, but Wenjing hurt her Achilles tendon of the right foot this Tuesday (November 3rd),” he explained. “It is her landing foot, which impacts training a lot, so we decided to change the plan.”

“Since the injury, I had been taking painkillers and wrapping bandage those days,” offered Sui. “We could hardly practice any throw jump in training.”

Nevertheless, she felt happy about the result.

“Although we feel a bit regrettable because we were skating in front of the home audience, I am quite happy about the performance because we did all we could do at that moment,” she said.

The Cup of China silver medalists’ next competition will be the Grand Prix Final which will be held in December in Barcelona, Spain. The bronze medalists from last season revealed the plan regarding the big event.

“We will tackle the quads,” said Han. “I think we are pretty consistent in all other elements, so from now on we want to spend more efforts on our stamina and the quad-throw. At the same time, we want to do more run-throughs so as to get more used to our programs, get all the levels, and improve the overall presentation.”

“I think we have what it takes to challenge the top of the podium,” Sui added, “but at this point we also need a bit of luck.”

Patience is also a learning key as Zhao pointed out.

“The first thing is to get her healthy as soon as possible,” he said regarding Sui. “You can’t really exert your strength when you injured your Achilles tendon. I know because I used to have the same experience. So we won’t rush. I believe this pair has a lot of room to grow, both technically and mentally, but at the moment, let’s get the things done step by step (towards the Final).”