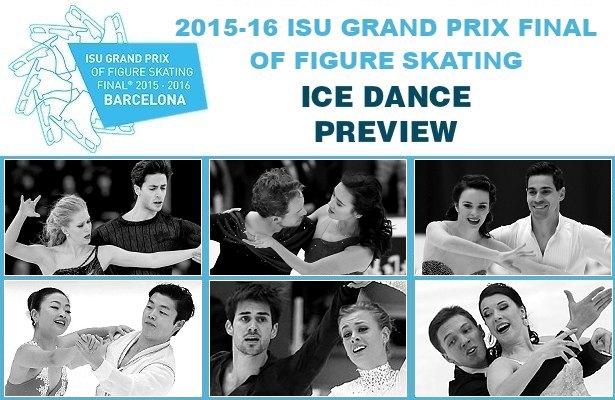 The ice dance podium for the 2015-16 ISU Grand Prix Final of Figure Skating (GPF), which kicks off this Thursday, is up for grabs. The spread in the season’s best overall scores for the top qualifiers is just a little over a point.

Five of the six teams that qualified have won a Grand Prix event this season. Therefore, even the smallest mistake—such a misstep in the Ravensburger Waltz (the compulsory pattern in the short dance) or a stumble in the twizzles—could have a great impact on the results.

Defending champions Kaitlyn Weaver and Andrew Poje of Canada are making their fifth appearance at this event. They qualified in the top spot by winning both their Grand Prix events at Skate Canada (SC) and Rostelecom Cup (RC).

In October, the two-time and reigning bronze World medalists introduced a brand new short dance to Richard Strauss’ “The Blue Danube” at Skate Canada. They shelved their previous short dance to an Elvis Presley melody after receiving feedback earlier that month (at Finlandia Trophy) that the music lacked a clear rhythm necessary for the dance.

The new dance was well-received and the reigning Canadian champions won that segment, as well as the overall competition. As expected, Weaver and Poje were more at ease with the new short dance at Rostelecom Cup, where they received a season’s best score.

Weaver, 26, and Poje, 28, have had more mileage on their free dance to “On the Nature of Daylight” by Max Richter and “Run” by Ludovico Einaudi—a modern and haunting dance that is a contrast to their joyful waltz. The dance has not been an immediate sell to fans, but judges clearly respect the intricate choreography, which includes a circular step sequence that is performed mostly in the hold position.

The Canadians look prepared and ready to secure a second consecutive Grand Prix Final title, but there will be little room for error. While they have been visibly error-free during the Grand Prix series, less obvious errors, such as missing a level on a lift in the free dance, could be the difference between gold and silver at this competition.

Joining the North American contingent of the Grand Prix Final field are three teams from the United States, a first for the competition.

Last season, Madison Chock and Evan Bates was by far the top U.S. team, winning the U.S. Figure Skating Championships and earning the silver medal at the World Figure Skating Championships in Shanghai, China. This season, however, the Michigan-based pair have had some struggles, particularly with their technical levels—an area where they’ve excelled in previous years.

Chock, 23, and Bates, 26, have changed their short dance several times this season. By the time they competed at Skate America (SA), their first Grand Prix event in October, they were on their third short dance. The first short dance was scrapped and never made it to competitive ice. They competed with a second short dance to “Dark Eyes” at Nebelhorn Trophy, but received feedback that the music was not suitable for the planned polka portion of the dance.

The U.S. champions had a solid debut of the short dance to “More” and “Unchained Melody” at Skate America, scoring 70.56 points, which is still the highest score for the Grand Prix Series. However, they did not did not fare as well with the dance at Cup of China. Chock struggled with the twizzles, deemed only level 1, which left them behind Italy’s Anna Cappellini and Luca Lanotte for that segment, and ultimately, overall.

While Sergei Rachmaninoff’s “Piano Concerto No. 2” is a skating warhorse, Chock and Bates’ free dance to the concerto is a departure after a few seasons of character-driven free dances. The dance has been well received by judges, but they have struggled on the technical levels in their diagonal step sequences. They’re hoping that a major rework of the dance will remedy that issue.

Still, the judges continue to appreciate their speed and power, and they have maintained high program component scores (PCS) throughout. Their difficult lifts, as in previous years, continue to be the highlight of their programs.

Meanwhile Maia Shibutani, 21, and Alex Shibutani, 24, make a third trip to the Grand Prix Final amid what looks to be a major breakthrough for them this season. Their winning score at NHK Trophy is currently the highest score in the entire Grand Prix series. In addition, their technical element score (TES) of 53.34 points for their free dance at the same competition is a major achievement for a team that has struggled with their technical levels for years.

The three-time U.S. silver medalists have come a long way this season since they finished a disappointing third at Ondrej Nepela Trophy—a competition they were expected to win—in October. However, a few weeks later, the pair arrived to Skate Canada with a new resolve and a reworked free dance to Coldplay’s “Fix You.” They reworked many of the elements and added a cut of an instrumental version of another Coldplay song, “The Scientist.” The fix— pun intended—worked: They placed second overall, earning the highest technical element score in the free dance (including a level 3 on both step sequences). That’s a major improvement from the level 1 and 2 they received for those elements at Nepela Trophy.

The Shibutanis maintained those high technical levels, as well as improved the execution of those elements, at NHK Trophy, and scored a new personal best of 106.35. On the way, the dance has become a fan favorite and generated standing ovations in both Canada and Japan.

Their short dance to Coppélia shows a more humorous side that is often displayed in their popular “ShibSibs” YouTube videos. The star element for both is fast and synchronized twizzles that often provoke a loud cheer from the audience.

Despite the high scores, it’s unclear how the five-time U.S. national medalists rank among the other top teams. A win at the Grand Prix Final would be a surprise to fans. Just beating Chock and Bates, who the Shibutanis have not beat since the 2012 U.S. Figure Skating Championships, would provide major momentum leading up to the upcoming 2016 U.S. Figure Skating Championships.

For Madison Hubbell and Zach Donohue, both 24, their first appearance at the Grand Prix is a major victory considering their struggles last season. After nearly losing out on a world team berth last season, many speculated that up-and-coming dance teams in the U.S. would pass them. But the reigning U.S. bronze medalists weren’t ready to be set aside.

The team relocated to Montreal to work with Marie France Dubreuil and Patrick Lauzon, the coaching team of reigning World champions Gabriella Papadakis and Guillaume Cizeron (who missed the Grand Prix Series due to injury).

The 2014 Four Continents champions’ short dance to k.d. lang’s version of “Hallelujah” is unconventional as a waltz, but the music highlights their flow and long lines. Thus far, the unconventional piece hasn’t been a problem so far: They placed first in the at Trophee Eric Bompard before the event was cancelled. At NHK Trophy, they placed second behind the Shibutanis and third overall, but still scored a new personal best. They also scored a new personal best for their free dance to “Adagio for Strings” by Daft Punk.

Their season’s best overall score is several points behind the top four teams, so a podium finish may be difficult, but two solid performances here will certainly cement their status as a top three dance team back home.

Cappellini, 28, and Lanotte, 30, make their return to the Grand Prix Final after missing the Final last season. The 2014 World champions struggled at their first Grand Prix event last season, Cup of China, and opted to withdraw from their second Grand Prix event to rework their programs.

Their programs are a much better fit this season. Their grandiose short dance to ‘The Merry Widow” by Franz Lehar is a perfect display of the Italian’s jovial style. Their free dance to “La Dolce Vita” incorporates different rhythms to show a variety of moods and character. Both programs make the most of the couple’s charisma and performance ability.

Cappellini and Lanotte had a stellar start at Cup of China, winning the event with a personal best in the free dance with a score of 106.91, the highest free dance score for the season. They placed second at Rostelecom Cup to secure a spot to the Final.

Bobrova, 25, and Soloviev, 26, returned to the Grand Prix Series after they had to sit out last season due to Soloviev’s leg injury. Despite the time away, they had the best results on the Grand Prix of all the Russian dance teams.

Not everyone is a fan of the Russian-style drama the 2013 European champions exhibit in both their dances, but few would deny that they do it well. Their short dance to Aram Khachaturian’s “Masquerade Waltz” and Sergei Prokofiev’s “Romeo and Juliet” provides the canvas for their power and speed while their free dance to “Anna Karenina” shows off their story-telling abilities.

The 2013 World bronze medalists have yet to medal at the Grand Prix Final in their previous four appearances. While their score is a few points behind the top four qualifiers, Bobrova and Soloviev still have the skill and talent to end their Grand Prix Final medal drought.

What’s your take on the Ice Dance qualifiers for the Grand Prix Final? Discuss here!